Can all weekends be three days, please?  I felt like I had enough time to do every thing I wanted, everything I needed, plus extra time leftover to semi-nap on our deck sofa, see a 3 hour movie and like every Telluride Film Fest-related tweet 😛

Wow, Friday feels SO LONG AGO.  I’d really been wanting to see Where’d You Go, Bernadette since I just read (and loved) the book, but it felt like I kept putting it off, for reasons that are probably Rotten Tomato score-related but also because it kept showing at either 6 PM (so early!) or 9 PM (so late!).  Can’t a girl get a 7:45 PM movie??  Anyway, after Joey told me to stop acting like I’m too old to go to a 9 PM movie, I acquiesced.  Look, the book is obviously better and there were major changes made (especially toward the end) that I felt significantly lessened the impact of the plot, but I still liked it!  Joey and I laughed a lot over the really badly edited photos of younger Bernadette and her husband.  Was it supposed to look so bad and fake??

Woke up Saturday and made us some banana bread buckwheat pancakes because, as Joey put it, “WE OWN EVERY FLOUR!” and buckwheat was one of them.  Turns out buckwheat not only looks like sand, but tastes like it?  No thank you!  Afterward, we hit the farmers’ market and two different grocery stores!!!  I was very proud of our stamina.  We were hosting a family BBQ on Sunday and weeks ago, when we planned the menu, I was elated over the prospect of buying fresh produce at the farmers’ market.  It was just as exciting as I thought it’d be 🙂

We spent the rest of the day cleaning the house, which is not exciting, then cleaned ourselves up and headed out for dinner/Rockies, which was exciting (until the game sucked).  We’re nearing the end of Rockies season, so I’m running out of time to try all the Biker Jim’s dogs, eek!  Joey and I traded halves so I could knock out two — Elk Jalapeno Cheddar and Rattlesnake & Pheasant — and both were great.  I fear I’m going to get to the end of this experiment and tell you what you already know — Elk Jalapeno Cheddar with classic topping is the best.

It was a perfect night at Coors Field weather/sunset-wise, but woof, that game!  We left early to go grab ice cream at Smith + Canon, only to find they had sold out and closed early, noooo!  Luckily, Ice Cream Riot is just down the street and though not quite Smith + Canon level, still very very good! 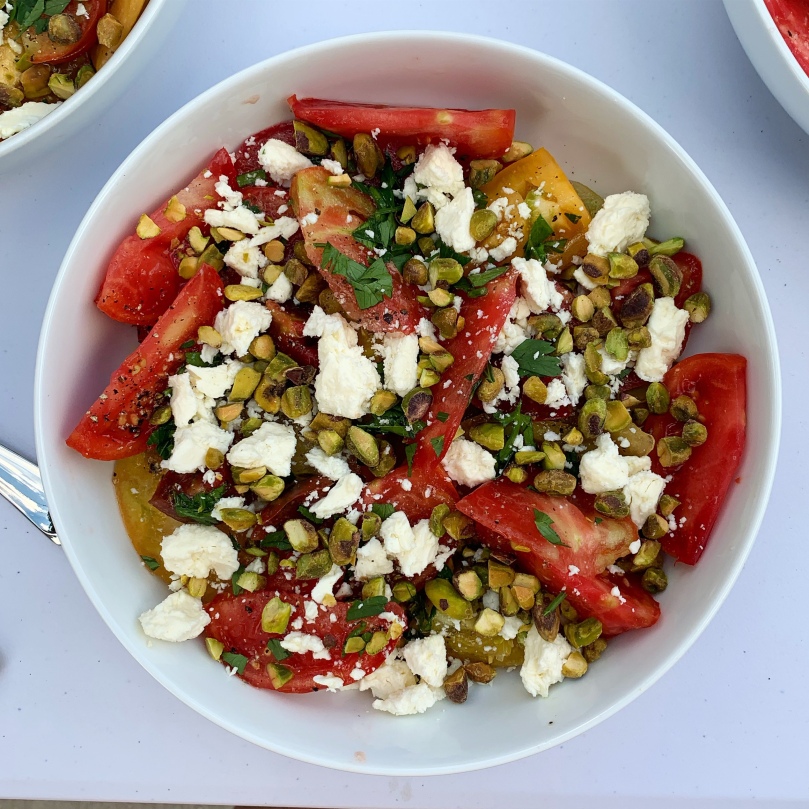 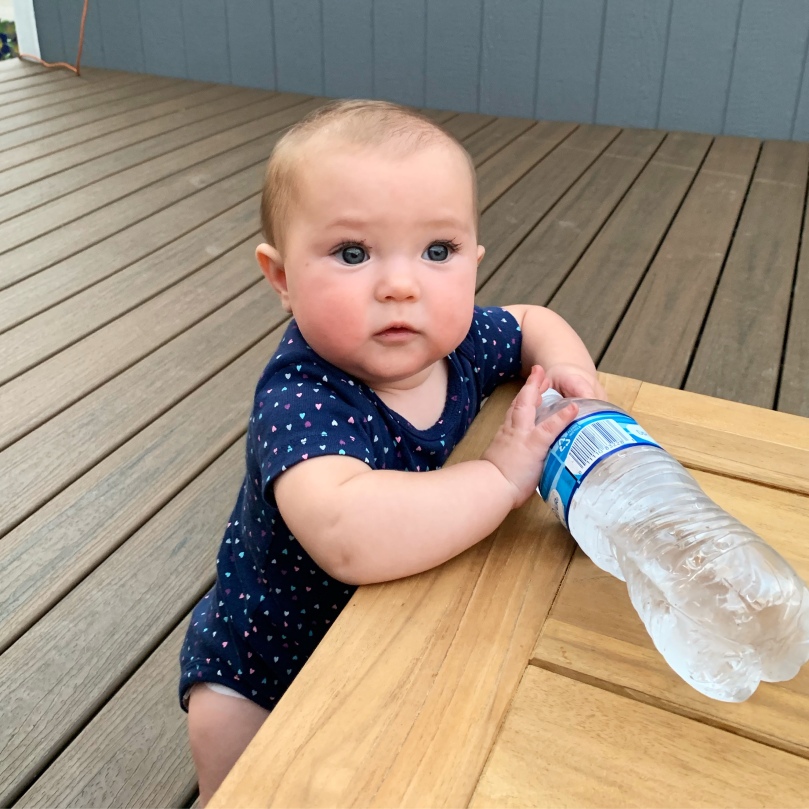 I remarked on Saturday that I couldn’t remember the last time we’d gone on a weekend run, so we woke up and did just that on Sunday.  My left quad is SO SORE and I have zero clue why, so we maybe walked a little, but “that’s what weekend runs are for” Joey says.  After cooling down for a bit and eating breakfast, we jumped right into BBQ prep.  Joey was outside cleaning up the front and back yard and I was in the kitchen whipping up potato salad and squash and corn salad, then prepping a tomato salad and burgers.  Go figure, I only got a picture of one of those dishes, but that tomato salad sure looks pretty!  Also, while I cooked, I had Titanic on and I’m never not blown away by that film!

This whole BBQ was supposed to function as a “Garage and Deck Christening,” thought up by Joey’s grandma, who wasn’t feeling well and ended up missing the whole thing, bummer!!!  But Joey, my parents, my sister, Wayne, Lori, Adam, Joey’s grandpa, Jory, Betsy, Lorenzo, and Ellie were all there and my heart was so full.  Lori got us the sweetest sign for our deck ♥  I asked my mom to bring a dessert, so naturally, she brought two.  I maybe loaded my plate with peach cobbler (MY FAVORITE!!!) and vanilla ice cream, plus almond cake with whipped cream and strawberries and my mom saw and said “I’m so proud of you!” HA!  Half the party went home around 8, but those that were left, watched A Goofy Movie on the deck and it was the best ending to the best day ♥ 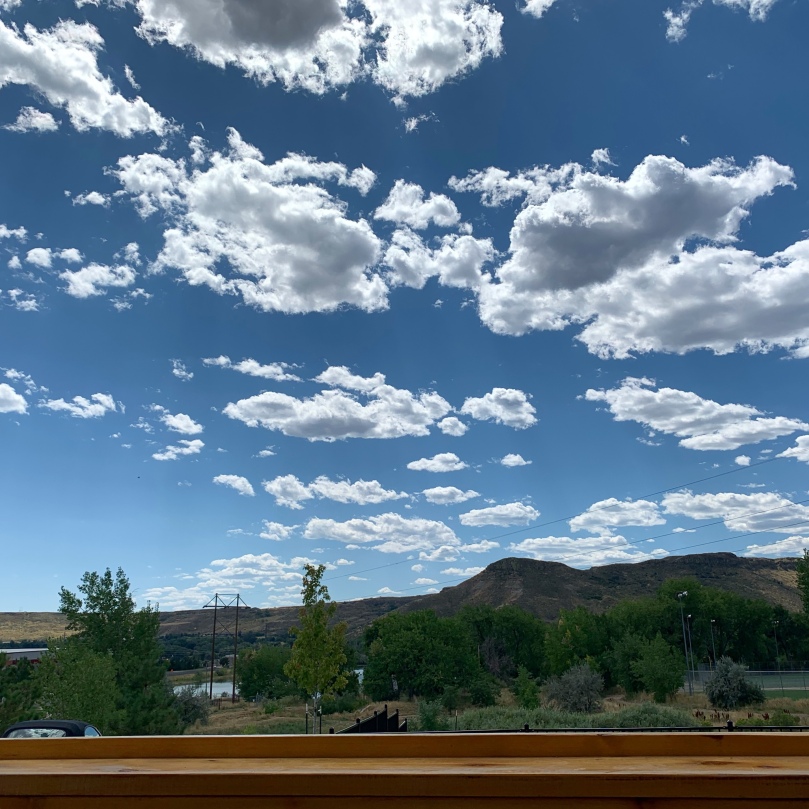 How great it is to host a Sunday BBQ, then get a day of recovery afterward??  Amazing!  We slept in till 8 (when did 8 become sleeping in??), then took ourselves to Weathervane for giant coffees and breakfast on the teensy front patio.  We wrapped our heads around September — we leave for Italy in one month and I do not feel ready, but we’ll get there… I think! — then headed to my parents’ to pick up our pup, who was not invited to the BBQ and it was so good to have him back… and then to leave him at home while we headed to Golden.  A day off, with nothing to do, felt like the right time to visit a brewery and I’d heard good things about New Terrain.  It wasn’t so busy when we first got there, but when we left a couple hours later, it was PACKED.  My Golden Haze was so so good and I only had a headache for a day and half afterward!  (Why???)  Also, what a view! 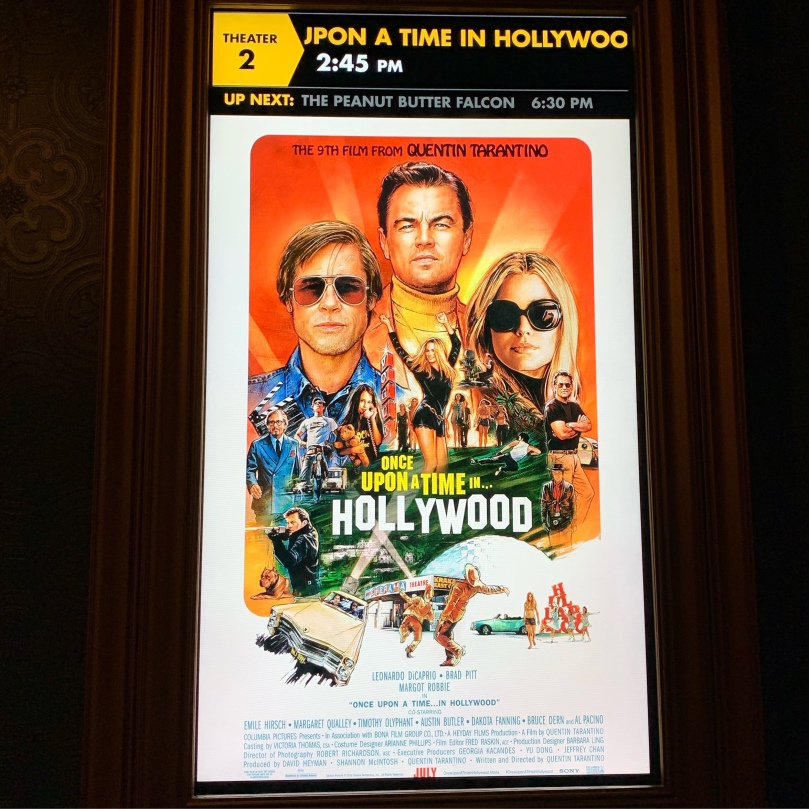 It was an actual 100° degrees outside, so we were looking for something cool and dark to do afterward and a movie sounded like just the ticket!  I can’t remember if I mentioned this, but we have the Alamo movie pass, so we pay a monthly fee and then we can see as many movies as we want!  The only thing A) we wanted to see and B) was showing at the right time happened to be Once Upon a Time… in Hollywood, which yes, we’ve already seen but it was “free” and can I please endorse the concept of the re-watch?  You catch so much more on a second viewing.  We still really really loved it, but found extra lines to laugh at and maybe clutched each others’ arms when we saw Leo get out of the pool and head to the tool shed.  Also, shout out to Zoë Bell, whose brief but brilliant scene is just so good!

Back at home, we relaxed on the deck, walked the pup, ate BBQ leftovers (from now until forever), dreamt of not drinking beer or overeating and crashed into bed.  I loved every single second of this Labor Day Weekend and fear the post-holiday weekend blues that are sure to follow, but I wouldn’t trade the memories for anything.  I hope yours was just as good!

It’s the end of August and fall is coming, but joke’s on us because it was so hot this weekend!  I tried to sit outside and read in the shade on Sunday and I only made it five minutes before giving up and heading back into the air conditioning.  But aside from being really hot, this weekend was wonderful and I am doing my best to live it up while we still have summer weather.  Which means brewery patio hanging, backyard movie night and grilling.  I love it all so much! 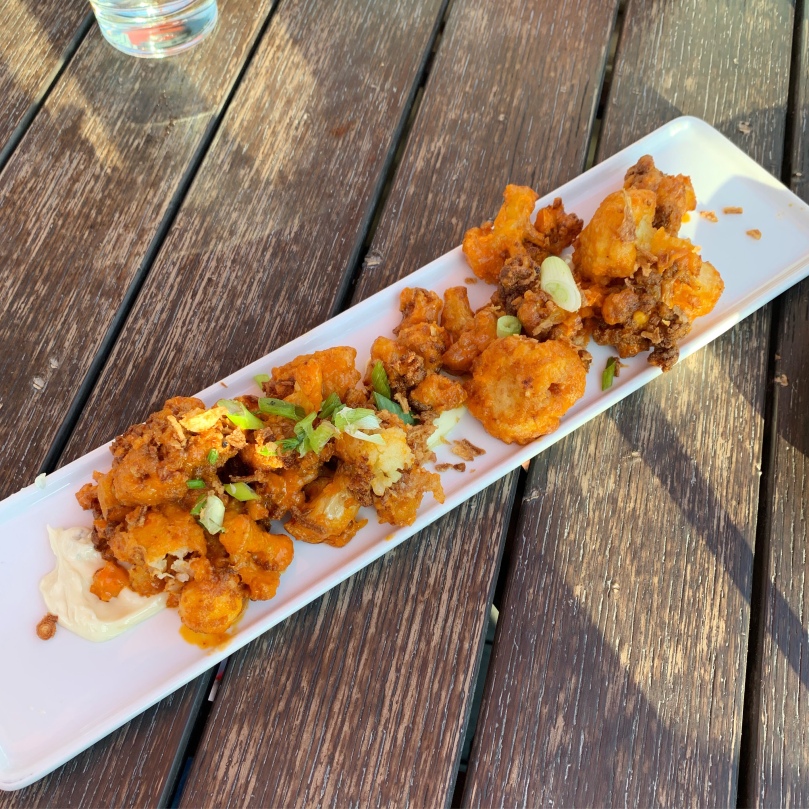 Joey has wanted to go to Briar Common for so long and I’ve been… resisting.  Their menu is never calling my name, but on Friday, it was!  We headed over and grabbed a spot on the rooftop patio then had beers and dinner and I really liked both, but the best part is just being able to hang out together outside on a Friday night ♥  Afterward, we went home and watched this movie Adam loaned us and it was quite the stacked cast!  I was not prepared for the ending, but up until then I had found a lot of it really funny?  Where has Christina Ricci disappeared to anyway??

Joey has been doing this thing where he wakes up too early on the weekend, so I woke up to him asking “wanna go to Snooze??” on Saturday morning, but I had a headache from my one beer the night before (WHY THOUGH?) and politely declined.  I did eventually get up and make us both yogurt bowls though.  We had an engagement party to attend at noon and don’t worry, we were first in line when the taco bar opened up 😛

Afterward, we hit up Best Buy so we could improve our outdoor movie sound system (success!) and then spent some time trying to get our projector hooked up to a streaming system, which involved Joey projecting the picture onto our ceiling.  When we finally got it all working, we maybe watching an episode of Friends up there.  Post-dinner (Loaded Summer Chili Fries is the new Spicy Black Bean Burrito Bowl, meaning it’s the summer dinner I can’t stop repeating), my sister and Wayne came over for movie night.  At the beginning of the summer, Joey said he wanted to watch The Mighty Ducks in our backyard and we finally made it happen.  I thought I’d seen it in bits and pieces, but after watching it all the way through, I realized I definitely hadn’t.  I kept waiting for Kenan to show up and that apparently doesn’t happen until the second movie.  Also, I thought all the regret over his failed career as a hockey player meant Gordon Bombay had been in the NHL and quit, but then it turns he had only played till he was 10 years old??  Wow, and I thought I held onto things too long!

Standard Sunday Content: two food pictures and nothing in between.  We really did go to Snooze this time!  I got my hair cut a few hours later and she was like “how do you go to Snooze and not wait for hours??” but the answer is that we never go unless we’re up early!  We were sat right away and despite my attempts to order a regular sized pancake for us to share, we always end up with the giant one.  After my hair cut, I hit up the mall and it was actually extremely successful but even so, I don’t understand how anyone enjoys shopping.  I feel like it sucks the life out of me!

Back at home, my outdoor reading attempt followed by Joey finally making it home for a loooooong fantasy football draft and then we made a fun summer dinner of a Grilled Onion Blossom (we made this last year too and it’s really good and easy!) + Crispy Chicken Cutlets with Cherry Tomato Panzanella that I thought was really good but Joey seemed stressed out by because the chicken took longer to cook than the recipe said it would.  Wait, am I the laid-back cook in the house now??  Please tell me what you’re doing to live out these last few moments of summer!