This weekend was chill.  Weather-wise, vibe-wise, football players uniting in solidarity against evil forces-wise.  Do I wish we didn’t even have to go there?  YES.  But do I respect the hell out of everyone who took a stand (er, knee) yesterday?  EVEN MORE YES.  And just like that, I’m a football fan 😛

But in all seriousness, this weekend was very good, very laid back, very cozy and I’m left feeling rested and reinvigorated.  Let’s do this thing! 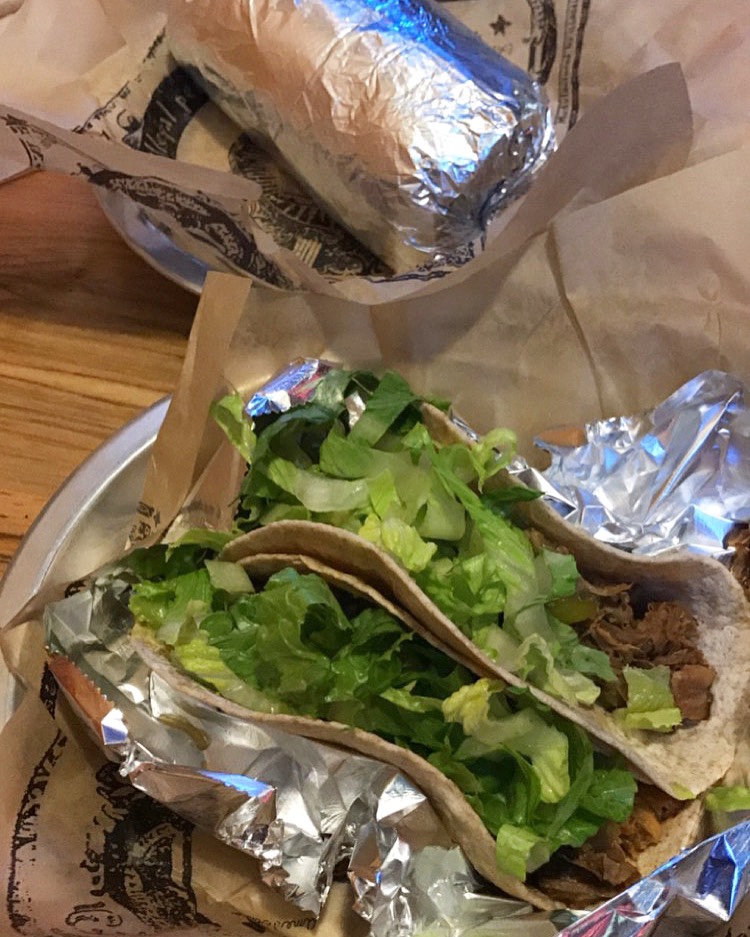 Friday started with a work event at the Leopold Bros. Distillery, which we’d never been to but it was a beautiful space.  We totally missed the tour but from what I hear it was very in-depth and not in a good way so maybe I’m glad we missed it… Did get to drink a real good cherry-infused Moscow Mule though!

Afterwards, we battled our way through the traffic back to Denver, then hit up Illegal Pete’s and the Kaleo concert at the Paramount Theater.  We had GOOD seats and per usual, the band sounded incredible.  Also felt like saying, “Look, I see you bass player/hype man and I’d love to jump up and down but this floor is sticky as hell and I can’t actually lift my feet.” 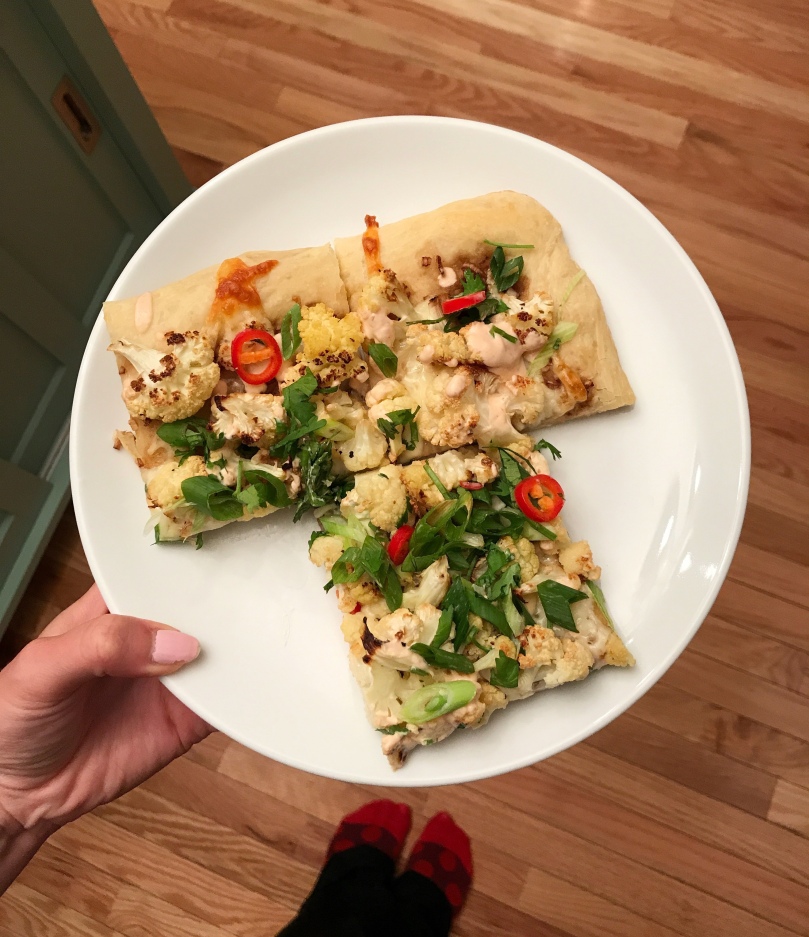 Saturday started with an 8-mile run.  Actually, Saturday started with my alarm going off and me feeling like “NO!!!!”  Really not into that run.  But we did it, it’s done and now we just have one week of short training runs before the actual 15K race on Sunday.  I got a massage afterwards and there’s really nothing better than post-long run pampering and an hour and a half of Mom time ♥

Came home and Joey had planted the mums my sister bought me.  I love them both so much!  Also hit up the grocery — there were peaches, apples and pears and I couldn’t decide what season my tastebuds were in so I got one of each — then made pizza dinner.  Guys, this was a Thai Roasted Cauliflower Pizza and it was AMAZING.  You gotta make it!  Also, La La Land is on HBO now so we re-watched and upon second viewing, we decided… it’s still a delight! 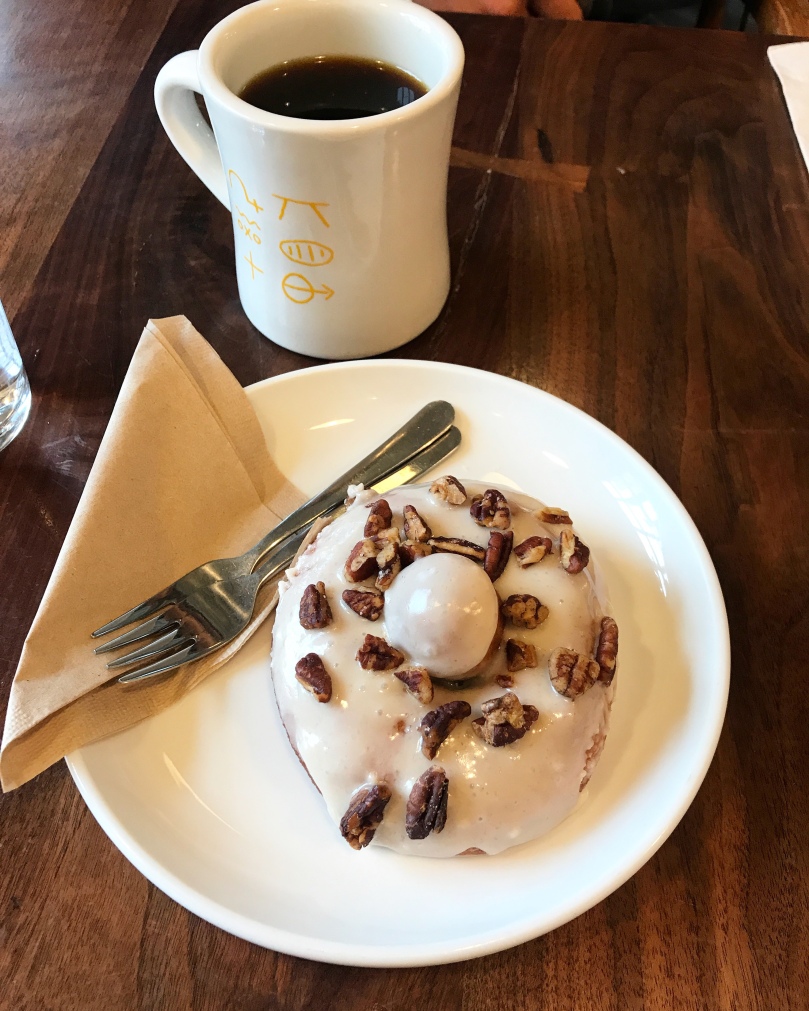 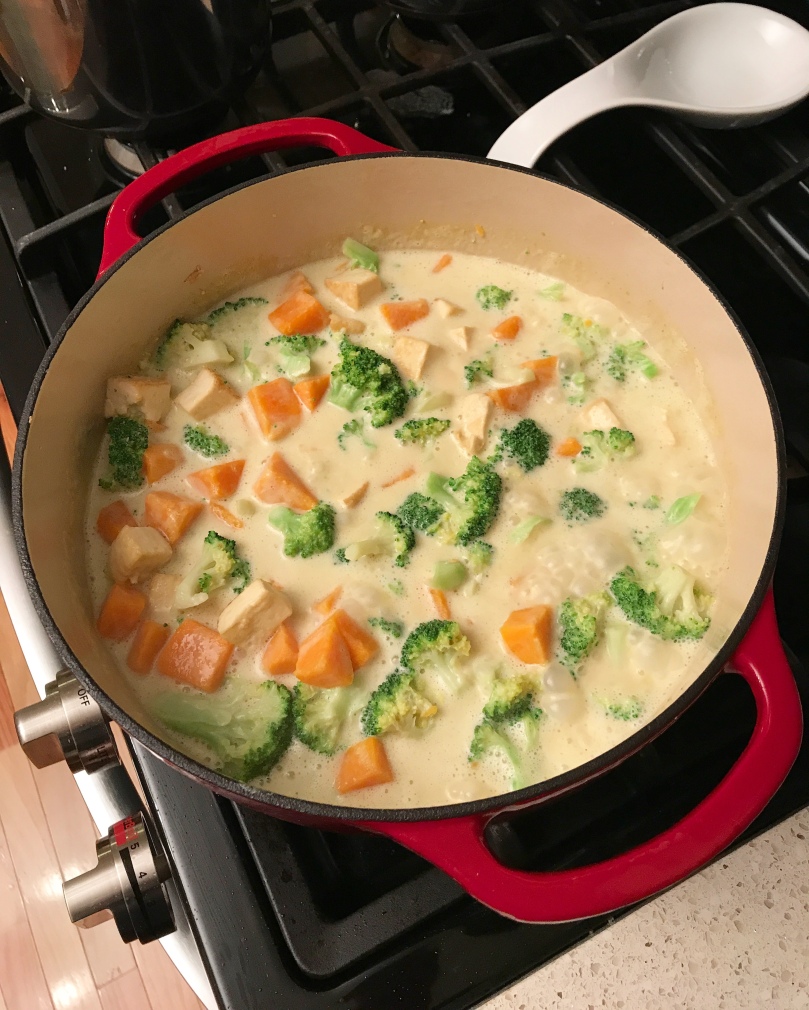 It basically drizzled ALL DAY on Sunday, but before the rain started, we made it to breakfast at Stowaway.  Of course we ordered a Salted Maple Pecan Donut as a breakfast appetizer!  Joey headed out to watch football afterwards and I put on cozy clothes and didn’t leave the house for the rest of the day.  I just started Big Little Lies and I think I like it!  Also knocked out our lunch for the week and then, after Joey was done re-writing the baseball standings (eeek!), we made a huge pot of 5-Ingredient Green Curry for dinner and it was kind of the perfect meal for a rainy day.

It’s only supposed to be gloomy like this for another day or so, but I walked around yesterday saying stuff like “I can’t believe it’s winter now!” because JUST LAST WEDNESDAY, it was literally 90+ degrees and this weekend felt like such a sharp contrast.  I’m not ready for it!

It’s Monday but I’m in a good mood and I blame the weekend.  I wholeheartedly love the full-on summer month of July but man did it feel exhausting this year!  I hit the ground running with Shakespeare Fest, 4th of July and ambitious birthday cooking plans, followed by a trip to the mountains, three concerts, hosting a summer BBQ and celebrating my mom’s birthday.  All SO SO fun and 100% worth feeling a little overbooked, but boy am I ready for a bit of an August slow down.

We maybe got a good preview of that this weekend, because even though we had Friday dinner plans, a Saturday night concert and early morning breakfast on Sunday, everything still felt real calm, cool and collected.  Gimme all those R&R vibes!

Can we start with Thursday, though?  Because it was my mom’s birthday and she had us over for lunch and that spread — salad, roasted garlic bread, jambalaya! — was so delicious and my mom was just too cute.  I love her so much!

On Friday, we went out to celebrate at Mas Kaos and though it started shaky when we were the first table sat upstairs in what felt like a weird attic space, it filled in later on and then the food was really good!  I felt panicky all day wondering how I would possibly choose between pizza and tacos, but then just ordered both and truly felt I was living my best life.

Back at home, we threw on Frances Ha and right away we loved it.  Maybe didn’t love the second half quite as much, but we still really liked it overall.  And what a delightful surprise when Adam Driver showed up! 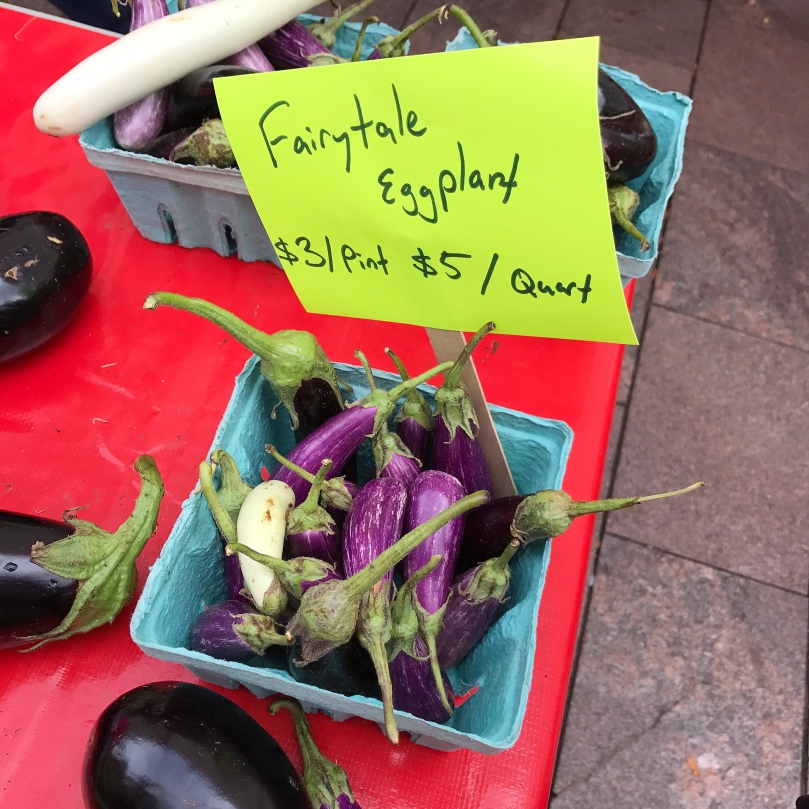 Started out slow on Saturday by making a weirdo breakfast for Joey and I.  I saw this recipe for Sweet Corn Oatmeal with Peaches in Cooking Light last month and couldn’t get it out of my head!  It was more savory than I had expected but also oddly satisfying?  It was a little bit gloomy/had recently rained but I was so hellbent on going to the Farmers’ Market for the first time in 3 weeks that I wasn’t going to let anything stop me.  Got peaches, shishitos (finally!!!) and a bargain stripy squash (technical term) for 50 cents then biked home all smiley and happy. 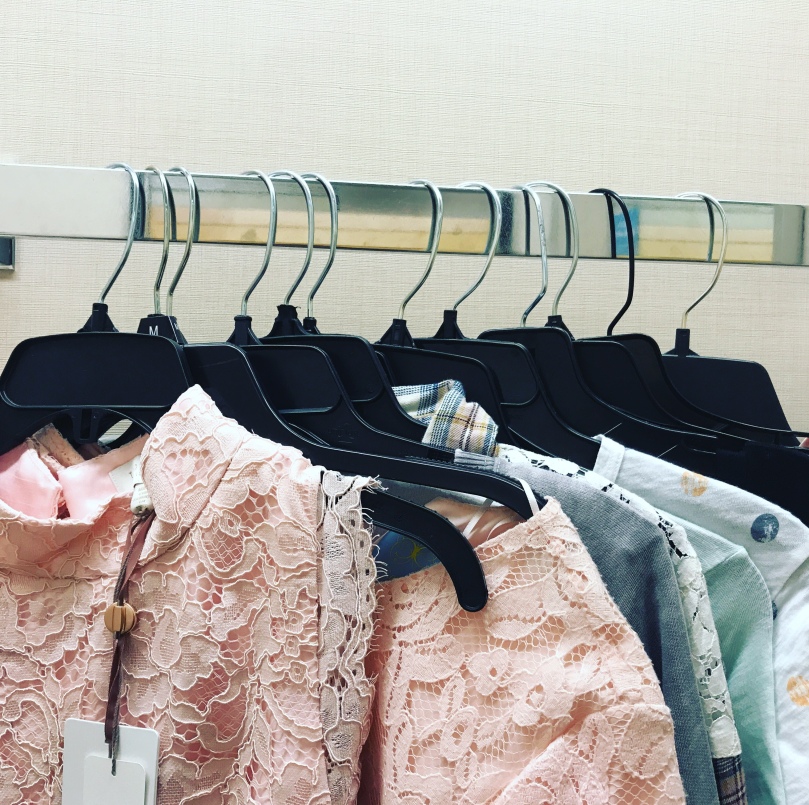 Afternoon shopping afterwards and I think everyone else had the same idea because Nordstrom Rack was PACKED.  Also, just want to tell you that Joey and I have been doing this thing where we forget to print concert tickets beforehand, which leads to driving to the office (did it TWO DAYS IN A ROW two weekends ago…) to use the printer or finding a Kinko’s.  What is even wrong with us? 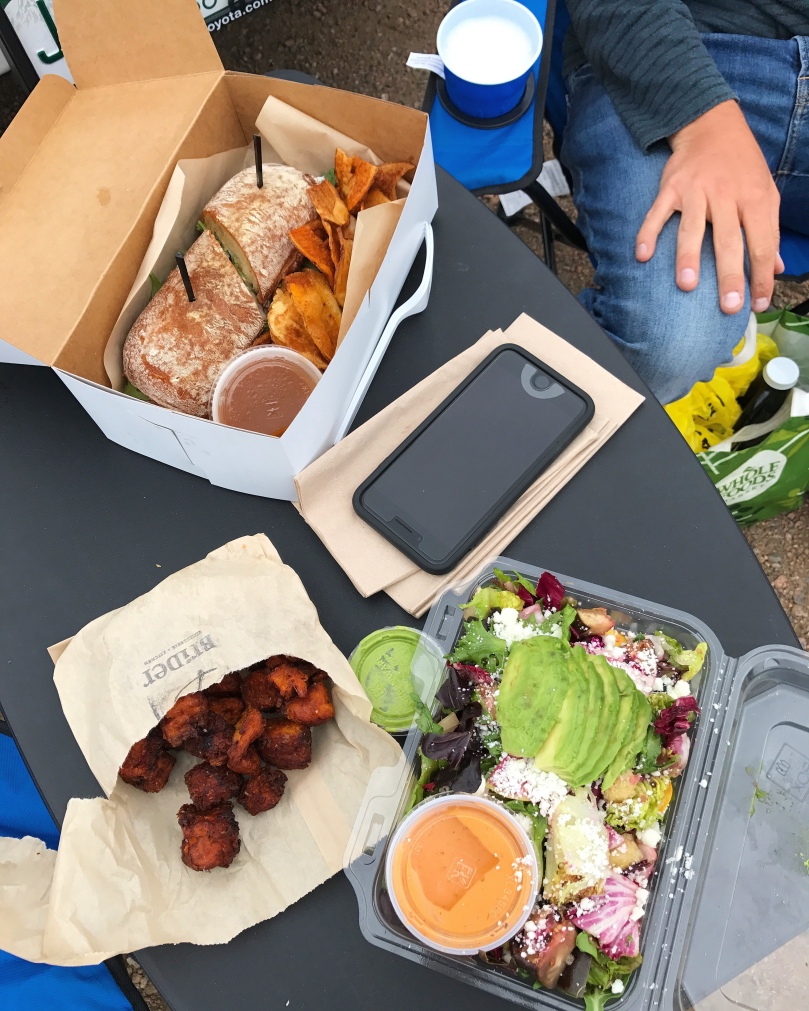 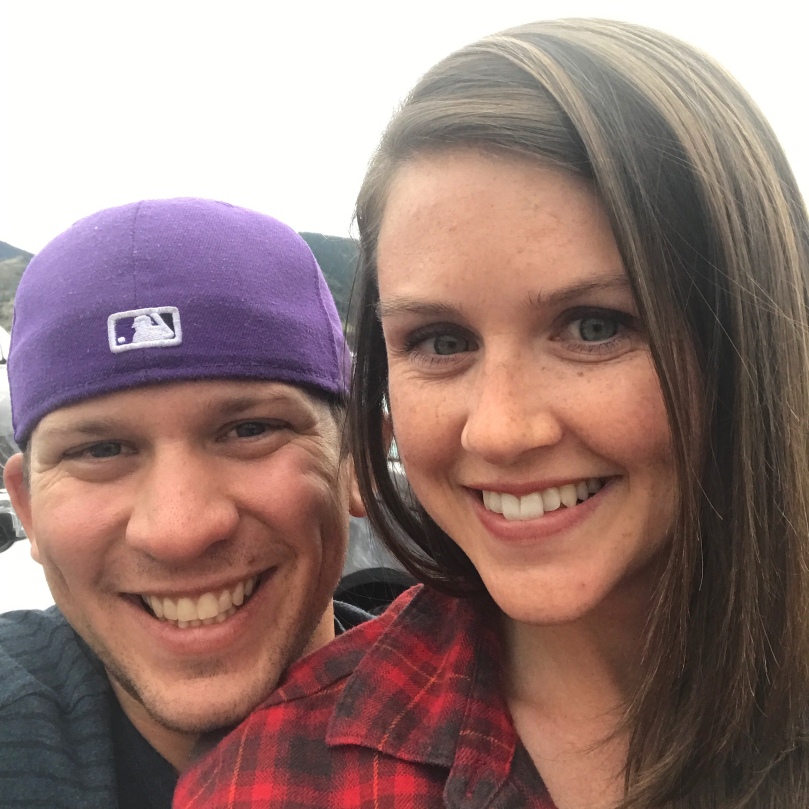 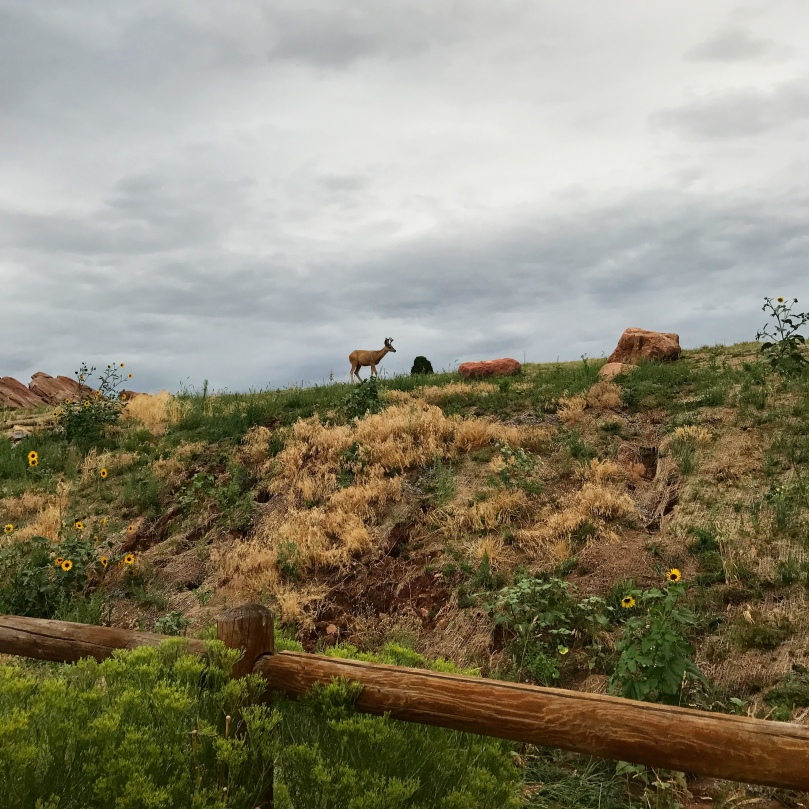 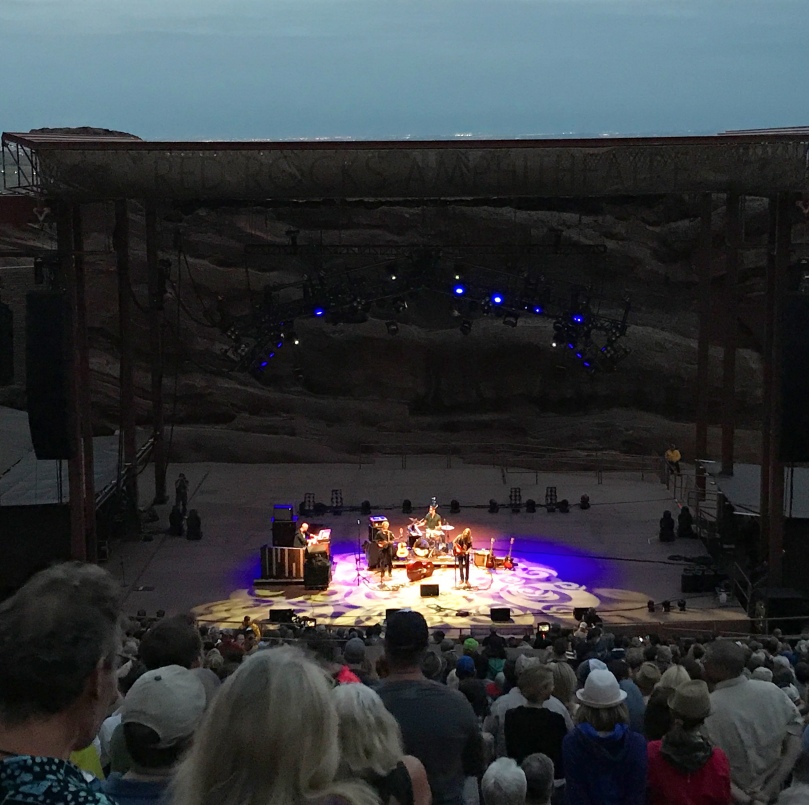 Saturday night was spent at Red Rocks for the Tedeschi Trucks Band.  FYI, it’s apparently “Te-de-SKI” which is cool because I only told about 100 people I was going to a “Te-de-shee” concert.  Anyway, we classed up our tailgate game with an actual table and chairs, plus takeout from BriDer.  It was probably double the price of our usual Illegal Pete’s tailgate dinner but looking back on those sweet potato tots, it was worth it.  Saw a real cute deer on our way into the amphitheater ♥

The actual concert was so great!  I’ve never been to a real jam band show so I didn’t know what to expect but everyone was dancing and singing and not even trying to pretend they weren’t smoking weed.  If you’ve never been to Red Rocks, that sort of thing is pretty normal but I think this was the most blatant display I’ve seen.  Most importantly though, I got to hear “Midnight in Harlem” live and Susan Tedeschi has an INCREDIBLE voice! 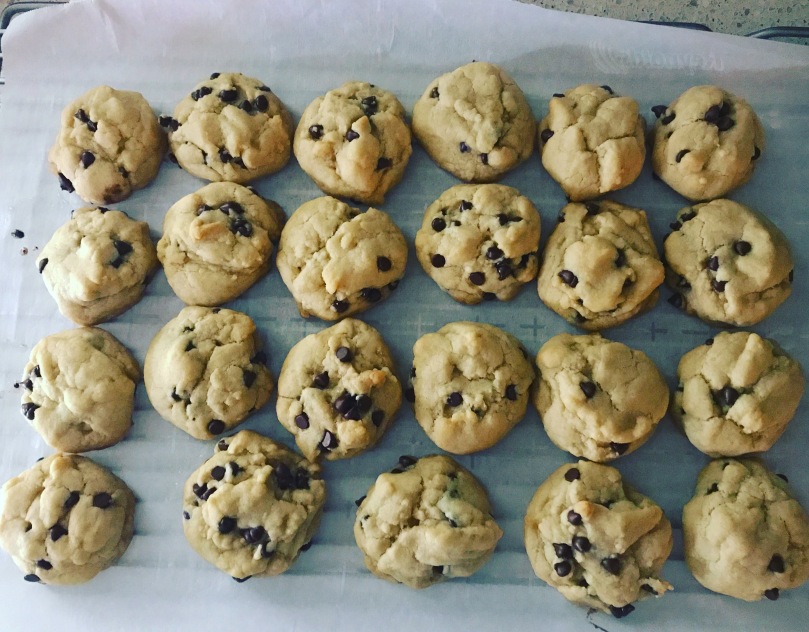 Sunday started with breakfast at Snooze.  Joey’s grandparents had never been there and I was all too happy to join them for their inaugural visit.  Afterwards we “adulted” by going to the grocery store, making lunch salads for the week and taking a walk up the street to buy more coffee beans for iced coffee that I never actually made (FAIL).  I also made a double batch of freezer cookies because we were out (THE HORROR!) and that just wasn’t going to work.  Feels much better now that we’re re-stocked.

Hey, I actually made it to Sunday afternoon yoga!  Felt so good to make it there and to get a good stretch in.  Back at home, we cooked dinner together and it was the very best.  Actually, Joey was at the breading station making “fried” broccoli and told me he felt very stressed but I think he was being dramatic 🙂  We made tacos from The Savvy Cook and I was so blown away by the end result!  We even made our own flour tortillas and they were a little messy and time-consuming but otherwise completely easy.  I stuck the extras in the freezer (along with the leftover “chorizo” dip) so we can totally make this killer meal again and it will be a real breeze.

Could this post be any longer??  Um well, I could talk about Game of Thrones and it could be A LOT longer, but I’ll keep it brief and just say: Jon & Dany face to face at long last!  How thrilling!  What did you all think?!