I am trying this new thing where I don’t post two food photos in a row on Instagram.  Partly as a challenge to myself to capture other parts of my life and partly because I don’t want to be that person.  Though I’m pretty sure posting as often as I do already makes me that person.  Oh well!  But that doesn’t mean I didn’t take any food pictures this week, just that I didn’t post them all.  Till now, because I’m about to share all our dinners from this past week.  Pretend you care, okay?

Here’s the thing.  Loved everything about this except the radicchio.  In fact, it is at this point in life that I’m comfortable saying I don’t need to eat radicchio ever again.  But I would (and will) totally make this again with another leafy base, like arugula.  We made croutons by toasting chunks of French bread tossed with olive oil, lemon zest, salt and pepper and we could not get over how good they were.  Gimme a bowl of just those croutons, please! 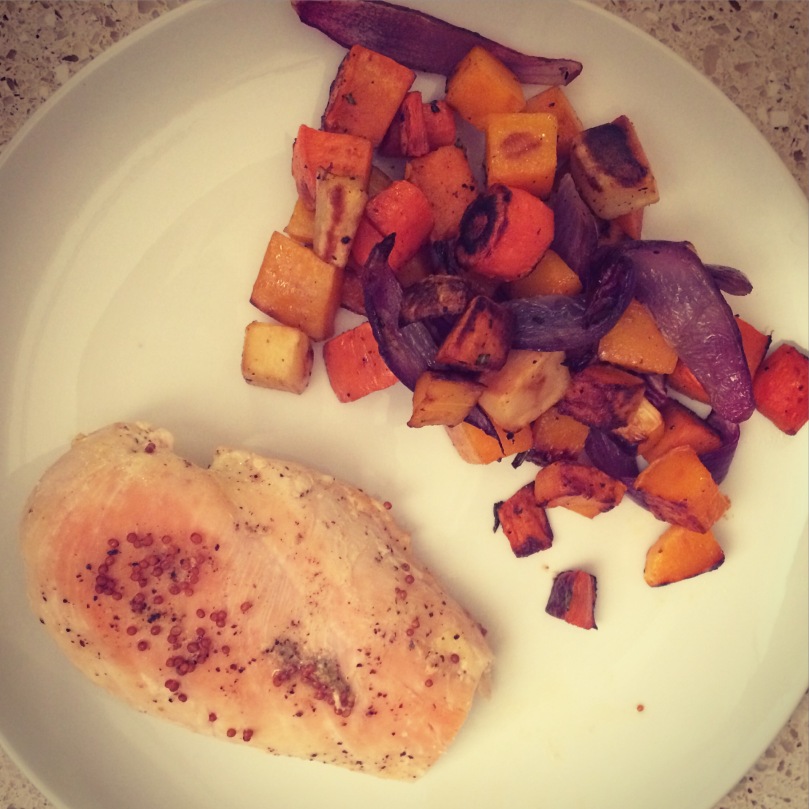 Cooking Light did this new thing where they gave a “master recipe” that made a TON of roasted veggies, then two recipes that made use of those veggie leftovers.  GENIUS!  Sadly, this chicken recipe didn’t really wow me.  It was good (but what isn’t good when it’s coated in mustard sauce?!), but not great and I felt like something was missing… like cheese or something rich.

Two thumbs up for this being the easiest recipe ever.  Since the veggies were already roasted, all we had to do was combine it with chicken stock and some spices, then puree and top with crumbled bacon and chopped parsley.  Again though, good not great.  We felt like the soup itself was missing something.  Luckily, the bacon saved the day.  The goat cheese toasts were simple and probably didn’t require a recipe but you know, you had me at goat cheese.

Serious Question: How often do you go out to eat?  We probably eat out three times a week and sometimes I feel like that’s a lot and other times (like after I read this column), I feel like that’s pretty good.  The pizza place down the street just started doing Wednesday night trivia and this makes my heart so happy.  It was tough but we came in second.  And this personal deep dish spinach and sausage pizza is always a winner. 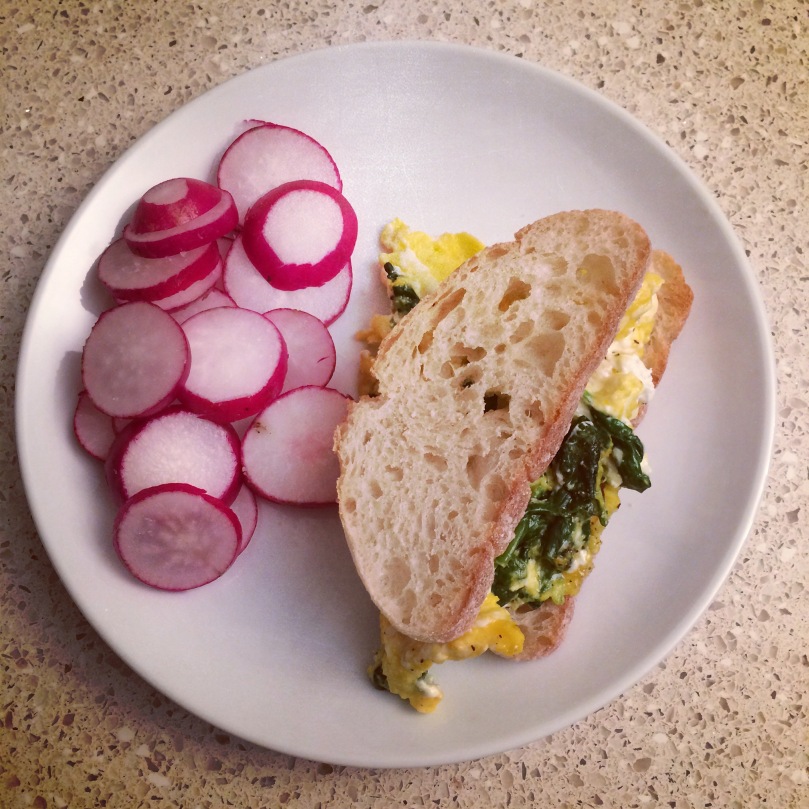 Okay, confession.  When Joey is not home to eat dinner with me, I eat weird things.  Like last week’s lettuce and hummus tacos.  I guess this is an indicator of how I would eat if I was single.  This week’s dinner craving wasn’t all that strange but definitely more spontaneous than re-heating Tuesday night’s soup.  I just sautéed some spinach then added eggs and goat cheese, scrambled it all up and stuck in between two pieces of toasted Ciabatta.  Yeah, I’m still riding that egg obsession hard.

The last use for our roasted veggies!  The recipe called for French Bread dough but I said no thanks and made my pumpkin pizza dough instead.  I’ve said it before and I’ll say it again… it never fails!  And it was also the star of this dinner.  For as cute as these turnovers were, the filling was pretty lackluster.  One ounce of cream cheese for four turnovers = not enough cream cheese.

So overall, it was a quick and easy week of dinners but not the best recipes I’ve ever tried.  You win some, you lose some.

What was the best dinner you cooked/ate this week?