I made Izy’s Falafel Smash and loved every fluffy pita bite.

I sold my old car!  Peace out, Little Corolla, it’s been real. 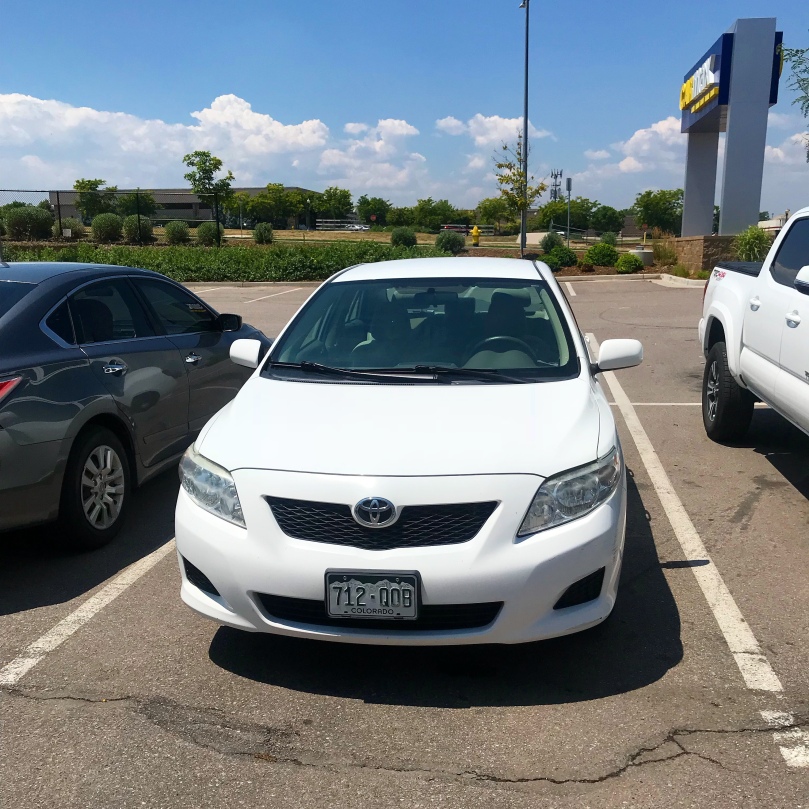 I bottled a Lemon-Basil kombucha and can’t wait to find out how it tastes.

I started a new book.

I went to a Rockies game. 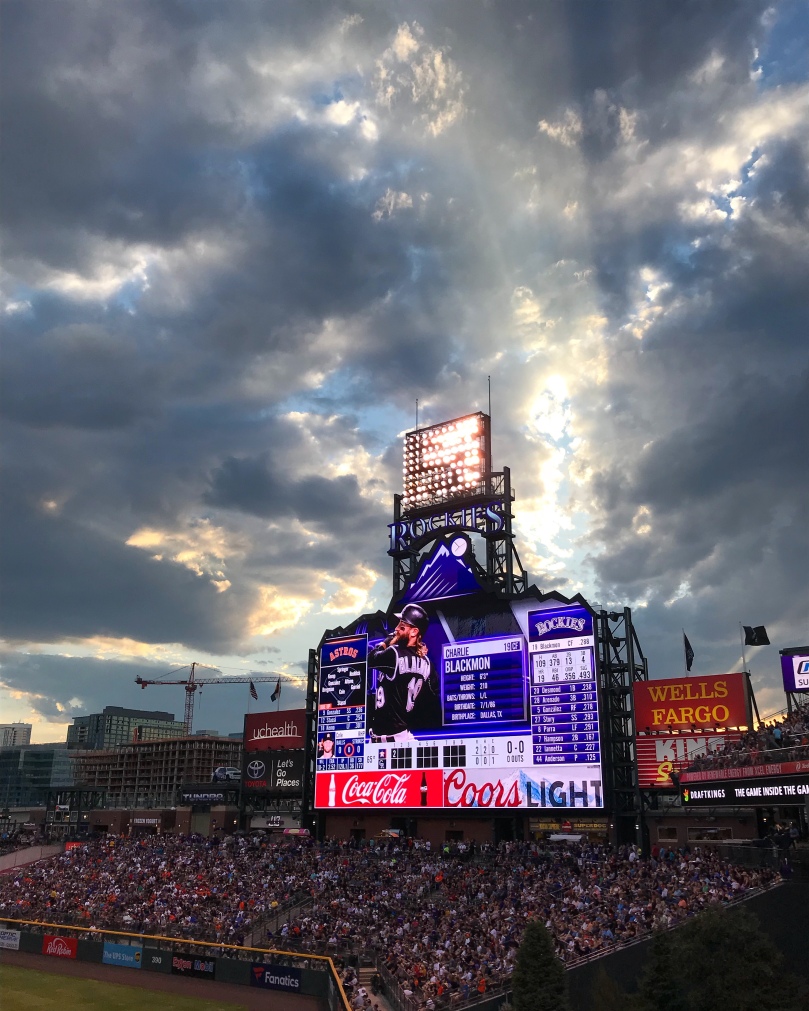 I drank a post-yoga beer.

I made BLT wraps for dinner and ate outside. 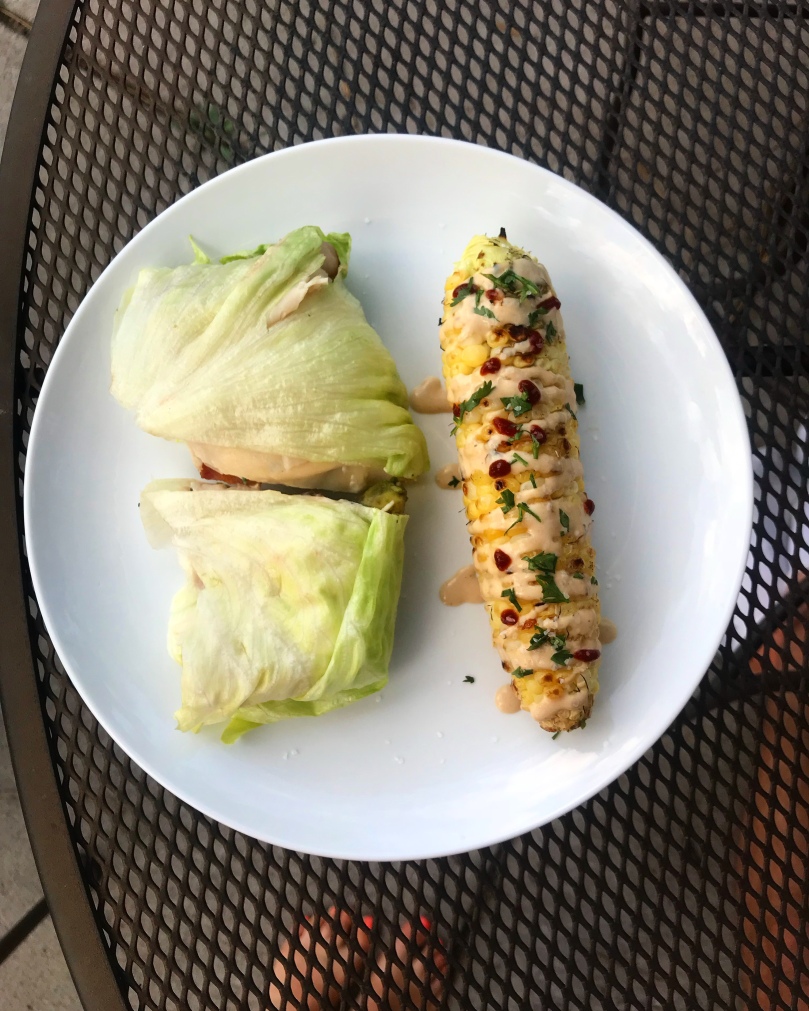 I reflected on how the summer has been so far.  In a word, GREAT!  I’ll be the first to admit I like to do ALL THE THINGS and can sometimes take on more than I can handle and worse, not realize it until I’m in the thick of things.  I vividly remember feeling so so burnt out by early July last year and here we are at the end of July and I feel energized and happy and fulfilled.  At least much more so than I have in summers past.  I mean, I’m probably still doing LOTS OF THE THINGS, just not ALL.  This is a win!

In other news, today is my dear sweet mother’s birthday and we are eating hot dogs at Biker Jim’s then going to the Rockies game.  I cannot wait!

Another weekend, another bachelor party excursion for Joey.  Which means I was riding solo again and thinking a lot about the pros and cons of that situation.  I was peak happy taking my sister to the Rockies game, riding to the Farmers’ Market, reading in the backyard, spending quality time with my parents and waking up early for a Sunday morning run.  I’m less indecisive when it’s just me.

But, my inability to chill is SO MUCH WORSE when I’m alone.  No one is there to point out that I haven’t sat down all day and that I’m rushing through like 80 projects instead of using the weekend to relax, to re-energize and to enjoy this sweet summer moment.  So I guess what I’m saying is find a partner that keeps you  from burning the candle at both ends ♥ 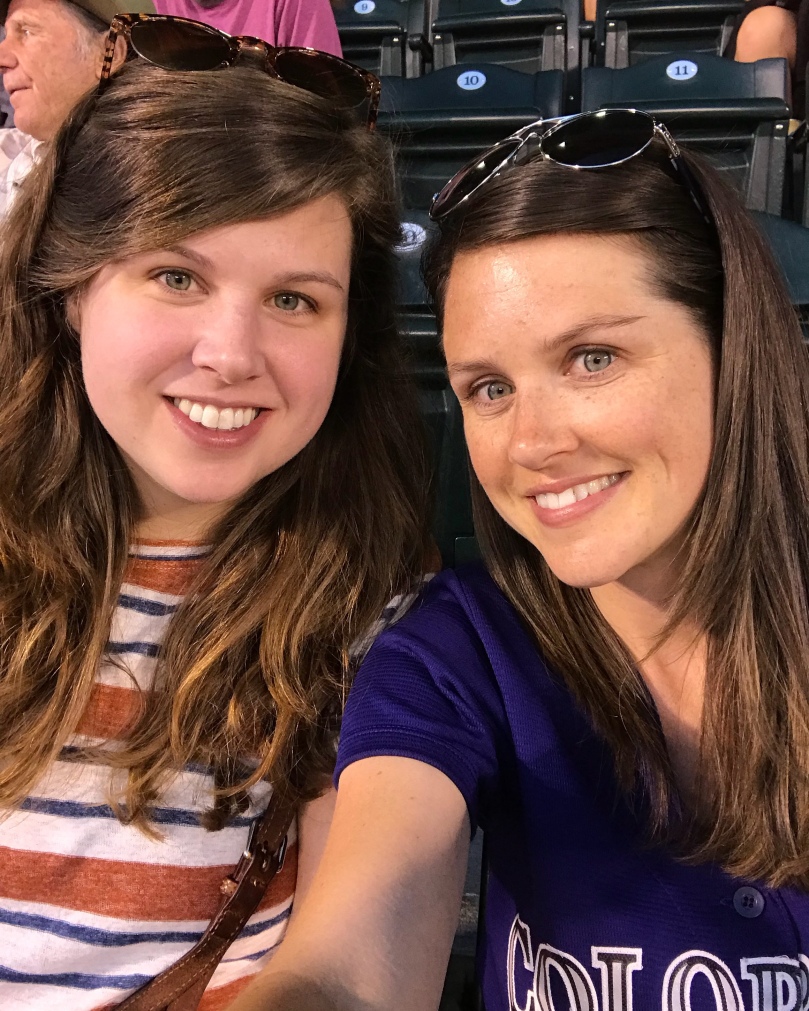 I got to have dinner with my sister on Tuesday and take her to a Rockies game on Friday, so I’m the luckiest!  This entire Diamondbacks series was godawful so I was thankful for sister distraction.  Also, I pointed out that it was 8 PM, the sun was still out and it was warm enough to be plenty comfortable in shorts and short sleeves.  Isn’t summer the best?? 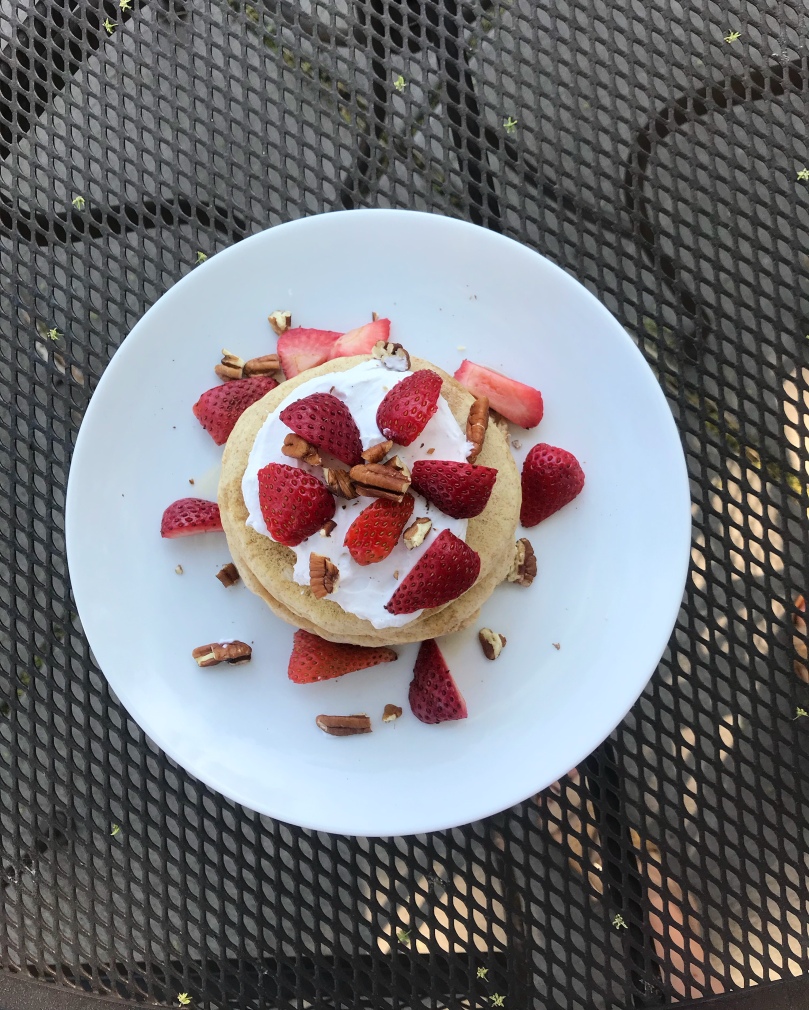 Andi Dog would not even sleep in our room with me on Friday (anguish face emoji) but we did get up Saturday morning and run around in the backyard for a bit before I made myself a pretty pancake breakfast, complete with coconut whipped cream.  I thought I was the happiest I could be, but then I biked to the Farmers’ Market and saw TONY WOLTERS!!!!  Oh and I bought these stunner heirloom tomatoes. 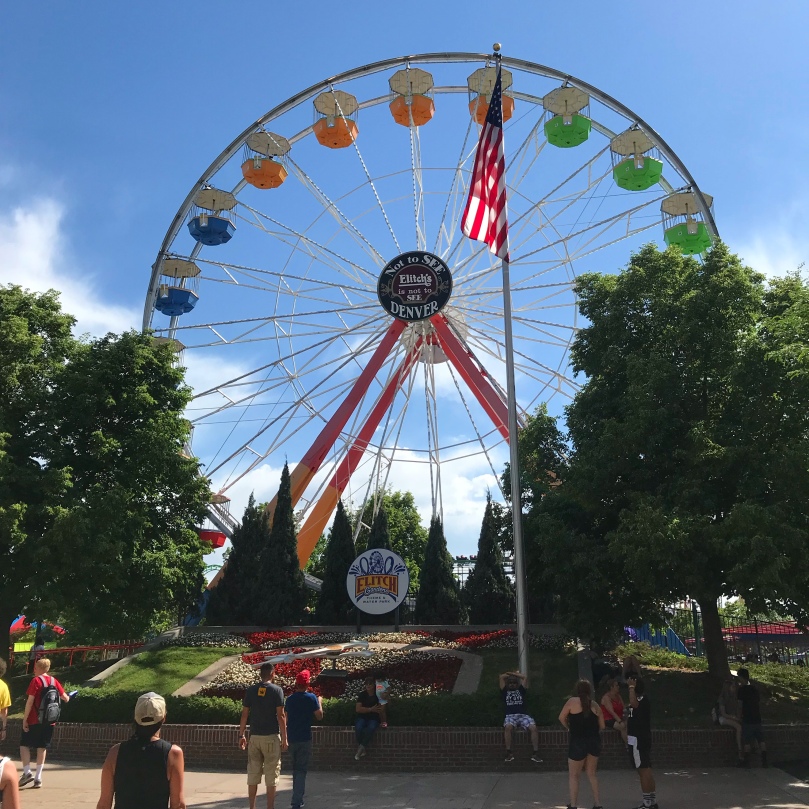 Look, I totally planned on going to the mall to find a dress for a wedding we’re going to THIS WEEKEND (why’m I so plan ahead about some thing but so last minute about other things??) but then… I just stayed home instead.  It was a million degrees outside, so Andi and I hid in the AC of our room and I read while he rested his little pup head on my leg ♥  Later on, I headed to Elitch’s for our company picnic and even though I was feeling anxious about going to a social gathering by myself, it was actually good and fine and fun! 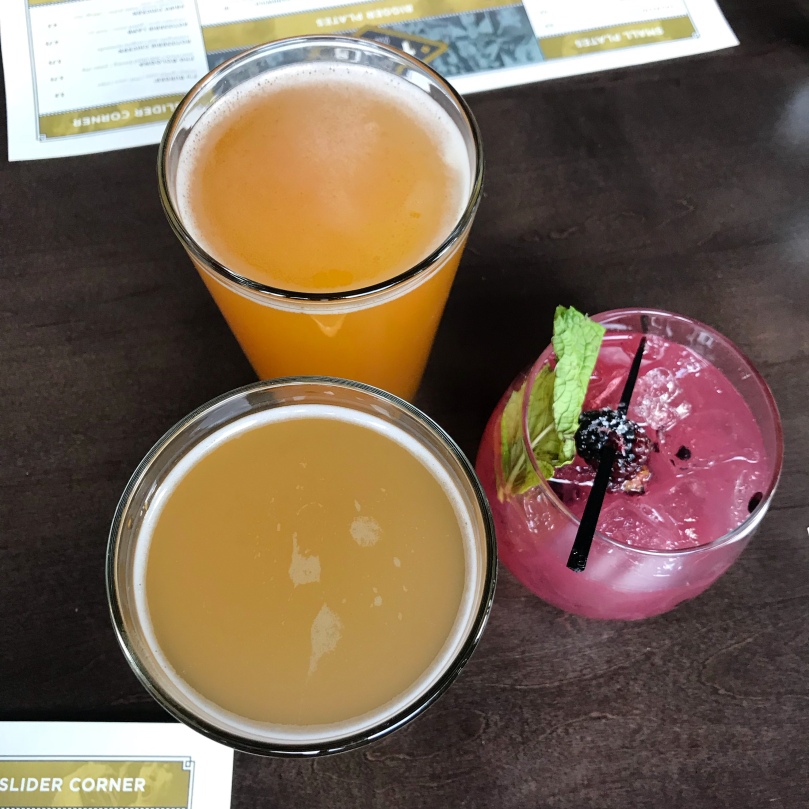 Took my parents to dinner that night!  Or, rather, they took me to dinner but I got to pick the location and I picked FNG, which Joey and I spotted on our way to Blue Pan Pizza over MDW.  It looked busy but they sat us right away and while my inner fake food critic wished there had been less of a delay between appetizer #1 and appetizer #2, we actually weren’t in any rush so it was okay to linger for a while.  I ordered my mom a beer, ate a really good burger slider and watched my dad eat “fatboy mashed potatoes” 🙂  It was so nice outside when we left so we walked around, gazing at pretty Highlands homes, then sat in the backyard for a bit when we got back to my house.  It was all the best! 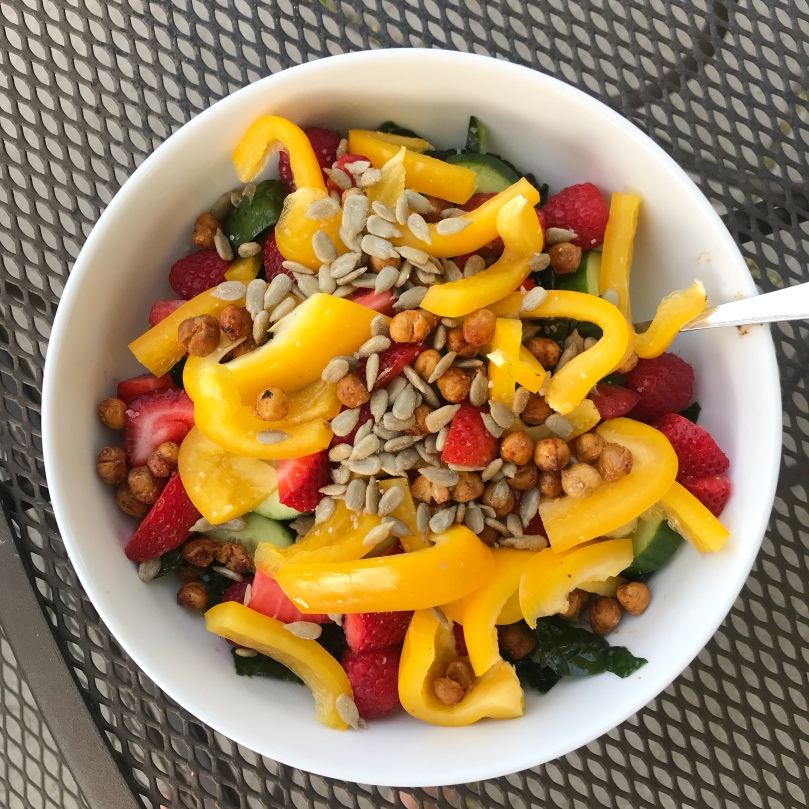 I got up too early Sunday morning to beat the heat and go for a run.  I maybe needed a nap later on, but when I’m jogging alongside the Platte River and it’s cool and quiet and the only other people out are fellow morning exercisers, it feels so worth getting up early.  Backyard breakfast and reading in the hammock followed my run and then my Instacart order arrived (all packed in a box which I thought was a genius way to avoid plastic bags!) and I rushed around making Green Salad with Dilly Chickpeas for the week before Joey arrived back home.  I did eventually go out to buy a dress but mostly I just felt tired and not into it.

Ended Sunday with the freshest salad, — Side Note: Joey was SO excited about eating vegetables, so I just assume the entire bachelor party was junk food and beer 😛 — a walk with our pup, spatchcocking a chicken and getting into bed to read.  Woke up to the first episode of Binge Mode: Harry Potter, so Monday isn’t all bad!