It’s the end of August and fall is coming, but joke’s on us because it was so hot this weekend!  I tried to sit outside and read in the shade on Sunday and I only made it five minutes before giving up and heading back into the air conditioning.  But aside from being really hot, this weekend was wonderful and I am doing my best to live it up while we still have summer weather.  Which means brewery patio hanging, backyard movie night and grilling.  I love it all so much!

Joey has wanted to go to Briar Common for so long and I’ve been… resisting.  Their menu is never calling my name, but on Friday, it was!  We headed over and grabbed a spot on the rooftop patio then had beers and dinner and I really liked both, but the best part is just being able to hang out together outside on a Friday night ♥  Afterward, we went home and watched this movie Adam loaned us and it was quite the stacked cast!  I was not prepared for the ending, but up until then I had found a lot of it really funny?  Where has Christina Ricci disappeared to anyway??

Joey has been doing this thing where he wakes up too early on the weekend, so I woke up to him asking “wanna go to Snooze??” on Saturday morning, but I had a headache from my one beer the night before (WHY THOUGH?) and politely declined.  I did eventually get up and make us both yogurt bowls though.  We had an engagement party to attend at noon and don’t worry, we were first in line when the taco bar opened up 😛

Afterward, we hit up Best Buy so we could improve our outdoor movie sound system (success!) and then spent some time trying to get our projector hooked up to a streaming system, which involved Joey projecting the picture onto our ceiling.  When we finally got it all working, we maybe watching an episode of Friends up there.  Post-dinner (Loaded Summer Chili Fries is the new Spicy Black Bean Burrito Bowl, meaning it’s the summer dinner I can’t stop repeating), my sister and Wayne came over for movie night.  At the beginning of the summer, Joey said he wanted to watch The Mighty Ducks in our backyard and we finally made it happen.  I thought I’d seen it in bits and pieces, but after watching it all the way through, I realized I definitely hadn’t.  I kept waiting for Kenan to show up and that apparently doesn’t happen until the second movie.  Also, I thought all the regret over his failed career as a hockey player meant Gordon Bombay had been in the NHL and quit, but then it turns he had only played till he was 10 years old??  Wow, and I thought I held onto things too long! 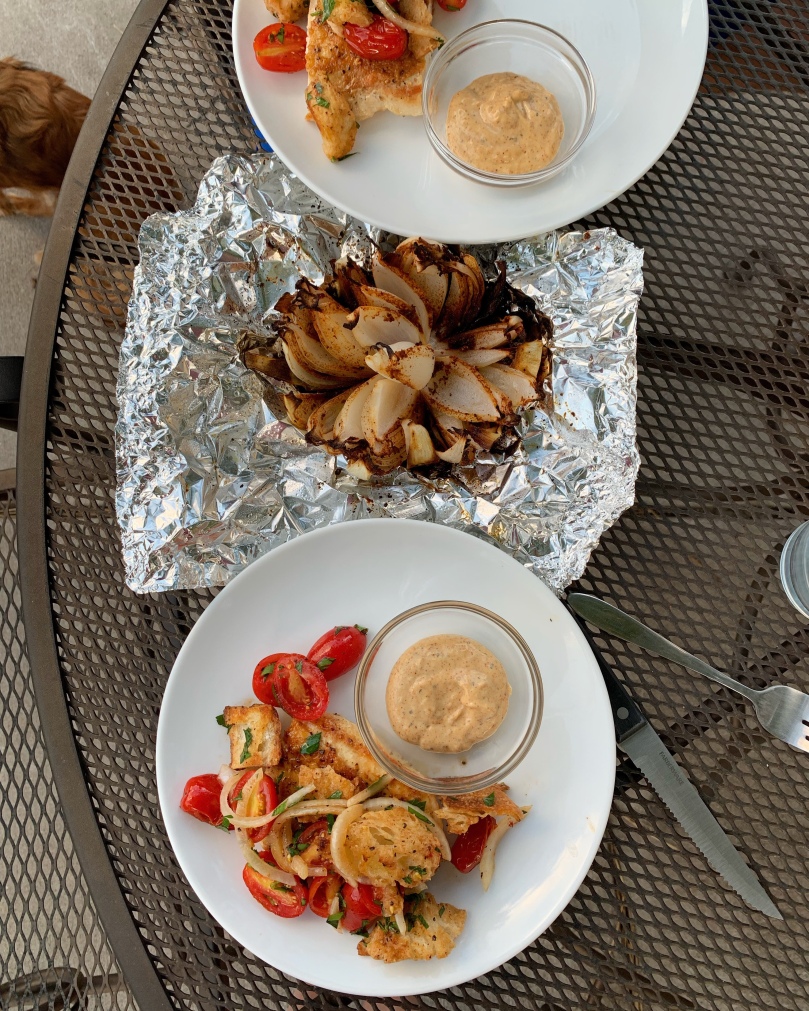 Standard Sunday Content: two food pictures and nothing in between.  We really did go to Snooze this time!  I got my hair cut a few hours later and she was like “how do you go to Snooze and not wait for hours??” but the answer is that we never go unless we’re up early!  We were sat right away and despite my attempts to order a regular sized pancake for us to share, we always end up with the giant one.  After my hair cut, I hit up the mall and it was actually extremely successful but even so, I don’t understand how anyone enjoys shopping.  I feel like it sucks the life out of me!

Back at home, my outdoor reading attempt followed by Joey finally making it home for a loooooong fantasy football draft and then we made a fun summer dinner of a Grilled Onion Blossom (we made this last year too and it’s really good and easy!) + Crispy Chicken Cutlets with Cherry Tomato Panzanella that I thought was really good but Joey seemed stressed out by because the chicken took longer to cook than the recipe said it would.  Wait, am I the laid-back cook in the house now??  Please tell me what you’re doing to live out these last few moments of summer!

I felt like last weekend got away from me.  Leaned too far toward the errand/chore side of things, so I decided this weekend would be the opposite and I’d keep adulting to a minimum.  Which meant eating out, having groceries delivered, getting a manicure and watching movies.

Friday night double date with my sister and Wayne!  We grabbed a casual dinner at Illegal Pete’s, where they have good, cheap, strong margaritas that feel too good to be true.  After, we headed to the Alamo for Spider-Man: Into the Spider-Verse and look, an animated Spider-Man movie that contains the word “Spider-Verse” might sound dumb and honestly, it didn’t really seem like my kind of thing but I’d heard too many good reviews and decided to be open-minded.  Guys, I loved it!  It just works on every level and it was incredibly funny.  “Can you float through the air when you smell a delicious pie?” is a real line spoken by a character called Spider-Ham and I laughed SO hard.  If you feel like taking a chance on this movie, I promise you won’t regret it.

I got a manicure Saturday afternoon and then we had a day date!  First, we went to Safta for blue crab hummus but when they didn’t have it, we ordered regular hummus and then split a lamb kebab sandwich, which turned out to be on a pita and filled with hummus.  So I guess what I’m saying is, I got my fill of pita and hummus but what I’m also saying is THIS PITA WAS INCREDIBLE.  That lamb, that chutney, those pickles.  Gah, we were in lunchtime heaven!

Later on, we went to the Mayan to see Destroyer.  It was just okay, to be honest.  Felt sort of amateur and though Nicole Kidman is a successful and treasured actress, does she have to wear so many wigs??  I liked the format of the film, I just didn’t love the content as much.

Sunday started with a family breakfast to celebrate my dad’s birthday.  I gave him a Coen Brothers book that he was poring over all morning, so I think it’s safe to say he liked it ♥ After we all ate, most of us walked over to the park and my niece made this cute snowman because guys, she is a little artist!  My nephew later kicked it over because guys, he is a 9 (almost 10!) year old boy.

The rest of the afternoon was spent on Larimer, where we met up with our friend Zach at Our Mutual Friend to join him in a birthday beer.  Then Jenn, Joey, my sister, Wayne and I had lunch? dinner? linner? at Cart-Driver.  I think this is how most people our age spend a Sunday in Denver, but for us homebodies, it felt like an indulgent treat!

Please tell me how you spent the weekend 🙂