Whoa, I could’ve sworn I didn’t have anything planned for this weekend, but then I looked at my iCalendar — does it make me an adult if I have to schedule everything I do in a calendar? — and realized we have a Denver Restaurant Week reservation, a party and the Oscars!  Very unlike me to forget about things that basically my entire winter has revolved around.  Luckily, I realized in time to bore everyone with a lengthy post about movies 🙂  Alternately, if you don’t want to read, you could probably just skim through the pictures and get the gist of this post. 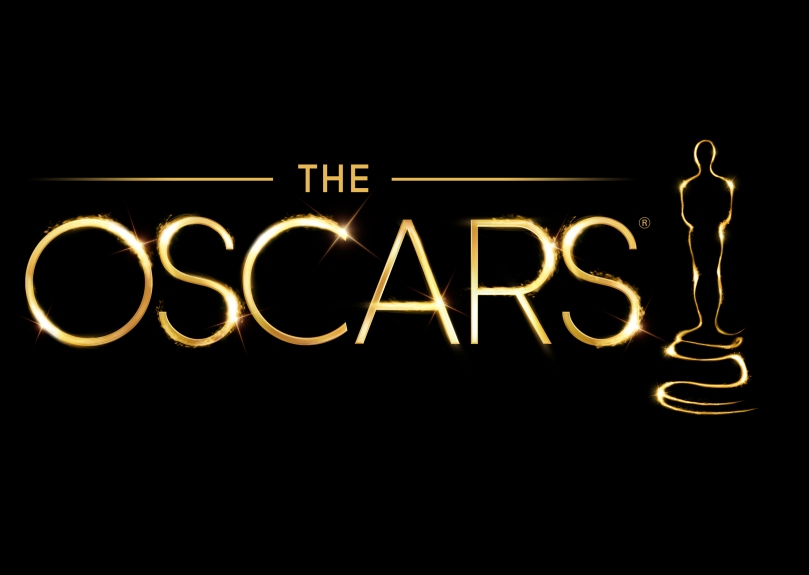 And the Oscar goes to…

Who I Want to Win: “Helium.”  Everything, from the plot, to the visual effects to the heartbreaking bond between the two main characters had me in awe.  Because you probably haven’t seen it, I’ll just give you the gist.  A terminally sick boy becomes friends with the hospital custodian who convinces him that there’s an alternative to Heaven called Helium.  The shots of the imaginary world of Helium were incredible and the story was heartbreakingly sweet.

Who I Think Will Win: “Just Before Losing Everything.”  Okay, I’ll admit I had no idea what was going on until halfway through the film, but once it all clicked, I spent the rest of the time on the edge of my seat.  It.Was.Intense.  It didn’t touch me the way “Helium” did, but the storyline of a woman trying to escape from her abusive husband with her two children was chilling and the ending was sort of up for interpretation so I think it has the upper hand.

Who I Want to Win: “Get a Horse!”  The plot of this one — a classic Mickey saves Minnie cartoon — was maybe a little trivial, but I love that Disney paid homage to their black and white roots then moved between past and present in such a flawless way.  I think it really spoke to their ability to stay current and relate to modern times.  Plus I just found it funny and entertaining 🙂

Who I Think Will Win: “Mr. Hublot.”  Personally, I didn’t love this film, but I can see how it would appeal to others.  It had a lot going for it — futuristic animation, human emotion, a puppy — and the story was pretty touching.  I can definitely see it winning the Academy over.

Actor in a Supporting Role

Who I Want to Win: Jared Leto!  Before I saw the movie I kept hearing about how much weight Matthew McConaughey lost, but I was totally shocked to see how thin Jared Leto got!  I thought his portrayal of Rayon in Dallas Buyers Club was flawless and he truly deserves to win.

Who I Think Will Win: Still Jared Leto.  Judging by the Golden Globes and SAG Awards, I think he’ll take home the gold…en Oscar.

Actress in a Supporting Role

Who I Think Will Win: Lupita Nyong’o.  Incredible movie, incredible story, incredible acting by Lupita, I just didn’t think her role was big enough.  I really think she could’ve had a much bigger impact if they’d deviated from the original story a little bit and given her some more screen time.

Actor in a Lead Role

Who I Want to Win: Leonardo DiCaprio!  It only recently came to my attention that Leo doesn’t have a single Oscar.  How is that even possible?!  I think he is such an incredible and committed actor.  When you see him on screen you forget he’s a big name actor and get sucked into his character.  All criticisms of “Wolf of Wall Street” aside, his performance was killer.

Who I Think Will Win: Matthew McConaughey.  And I won’t even be mad.  I’ve always thought Matthew was a cool guy but a mediocre actor.  Isn’t he just playing himself in everything?  But he totally proved me wrong in “Dallas Buyers Club.”  Well, he was still kind of playing himself in a way, but he has some serious acting chops and his portrayal of Ron Woodroof was both honest and touching.

Actress in a Lead Role

Who I Want to Win: Amy Adams.  I just love Amy.  She’s such a versatile actress and I always thinks her transformation into the character she’s playing is so flawless.  Also, her hair.  I loved her in “American Hustle” and “Her,” but I guess she’s only nominated for one of those 😛

Who I Think Will Win: Cate Blanchett.  I guess my not liking her character isn’t exactly a fair reason not to give someone an Oscar, is it?  Judging from all the other award shows, Cate will probably take this one home.

Side Note: I will probably die if Sandra Bullock wins.  Not that her performance in “Gravity” was bad but how can we give an Oscar to someone who also starred in “The Heat”?

Who I Want to Win: “Her.”  Of all the best picture nominees (at least the ones I saw), this was my favorite.  I loved everything about it and thought it was such an interesting look into how relationships are formed.  Plus all the futuristic stuff (um, minus the high-waisted pants…) was so cool.

Who I Think Will Win: “12 Years a Slave.”  Definitely not as pleasant as watching “Her” was, but this movie was amazing.  Despite being a movie set hundreds of years ago, the repercussions of slavery are still alive, making this film important and relevant today.  And the Academy loves being relevant 🙂

I also predict Lupita Nyong’o will be stunning, man buns will run rampant and Ellen DeGeneres will be entertaining, as always.

What was your favorite film?

What are your Oscar predictions?

Do you do anything fun during the show?  I’m all about  popcorn and that at home ballot.  Which reminds me, I should print those out at work today because our printer is in a box somewhere in our basement…

Sorry about the later than usual “Weekend Things” post (I know you were all dying in suspense…), but I figured I’d rather get my Olympic wrap up out first.  And because there’s “a lot of verbage” (as Joey kindly put it) in this post as is, I’ll just jump right in!

I guess Friday fun really started at 11:30 when we attended a “trial dining” lunch at a brand new Modmarket location.  I ordered this behemoth of a Cobb salad (seriously it was huge) then ate the whole.dang.thing. and proceeded to be hungry 2 hours later 🙂  Oh and I’m all for free lunch, especially from Mod, but I didn’t know asking for “light” dressing, meant no dressing.  Let’s hope they work that kink out before their grand opening.

On Friday night we met up with Bobby and Becca at a tiny little brewery that brews “English-style ale,” which I’m pretty sure just translates to “super bitter beer.”  Okay, maybe that’s a quick judgment but I’ve never had a beer quite as bitter as the IPA I chose.  Also, fact: my qualification for a friend is if you’d also like to be home and in bed before 11 PM on a Friday night.  Bobby and Becca pass this test.

Saturday started with this!

You guys!  Chicken fried poached eggs!  Over cornbread and buffalo hash with the best hollandaise I’ve ever tasted… and I don’t even like hollandaise!  I’ve been dying to go to this tiny little breakfast place called Sassafras that serves up fancified Southern favorites.  They actually had a whole section for grits and believe me when I say I had thee hardest time choosing what to order.  This dish was killer but I actually think I liked Joey’s “Deep South Benedict” better.  Goat cheese jalapeño grits, I die!

The rest of Saturday was spent at my nephew’s 5th Birthday Party.  Seriously, FIVE?  When did that happen?  Anyways, he avoided Joey and I the entire time and we then we found out it was because he broke his Christmas present from us and didn’t want to tell us, ha ha!  We also made a spontaneous decision to go to the movies while on our way to Home Depot because the movie theater (and almost anything else)>Home Depot.  I thought all the yelling at the beginning of August: Osage County was a little forced but then I ended up really liking the movie, although it looks like I’m in the minority there. 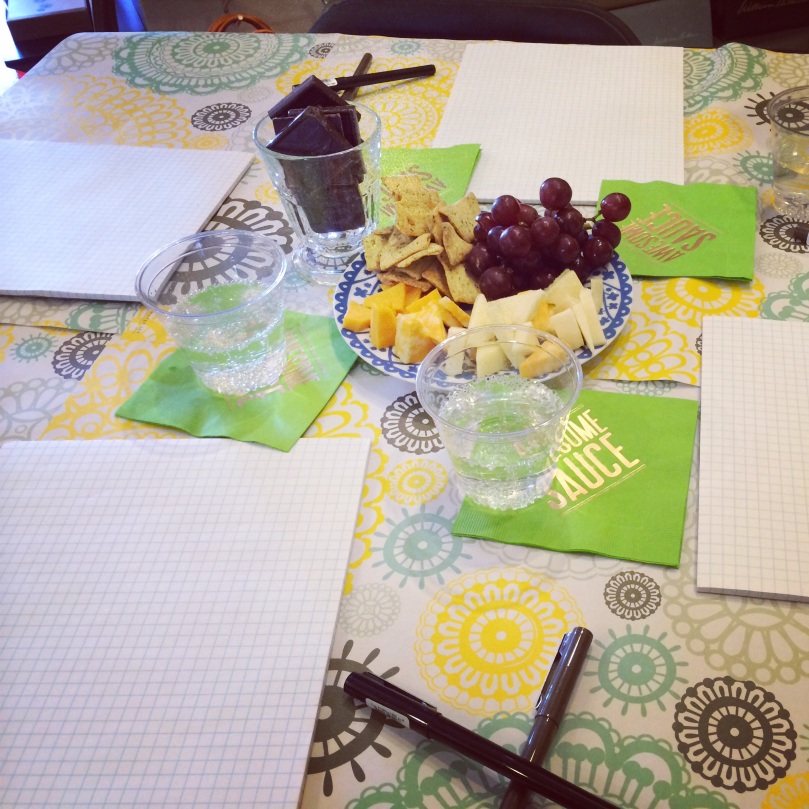 Sunday was a day of Joey working hard to get drywall stuff finished in our living room (yes, our couch is still in the kitchen…) and me doing stuff like working out, boiling eggs, watching Food Network, writing about the Olympics and generally being no help to anyone but myself.  However, later in the afternoon, my mom and I went to a calligraphy class!  I learned a few things:

No joke, at the very end of the class, the teacher gave us all some fancy paper to write our names out on and I spelled my own name wrong.  I realized it right as she was saying something along the lines of “Now you can keep your paper as a memento and I hope you keep it for a very long time.”  Yeah, probably not…  I now go by Laurene.  It’s the French version… or something.  Anyways, I wasn’t as sold on my own calligraphy skills as much as I was on the lady who taught the class.  She was incredible!

Wishing you all a Happy Tuesday and the ability to spell your own first name!