IF I was the type of person who used the term “a hot minute,” then I would certainly use it to describe how long it’s been since I wrote a honeymoon recap post.  Unfortunately (but probably fortunately), I’m not, so let’s just say it’s been a kind of too long amount of time and I’m ready to get back at it.

By Day 3, we’d definitely gotten a hang of the whole “Wanna-See-Everything-But-Also-Wanna-Relax” thing and found ourselves somewhere in the middle of both of those things.  Which is pretty perfect if you ask me.  And by Day 3, we’d also realized that the whole “Happen-Upon-An-Amazing-Restaurant” thing was not working so we took to doing some research and found ourselves just a few block from our hotel for breakfast at Laduree.  If I’m being honest, a picture of the cutest pastel table setting ever was really all the convincing I needed.

It was just as cute (if not more so!) in person.  Once there, we feasted on… bread!  I bet you didn’t see that coming.  But it was French Toast, wait no, it was Pain Perdu so that counts as changing it up, right?  Also, let me tell you a story about how the menu mentioned Chantilly and my food came out with a cute little foil wrapped log of what I assumed was Chantilly and I was therefore eating chunks of it on top my bread only later to have Joey explain to me that it was just butter.  Part of me was nauseated and the other part of me was wondering when I could eat some more chunks of that amazing butter.

We could’ve spent the rest of the day museum hopping or whatever you’re “supposed” to do in Paris, but no.  We didn’t do that.  We took ourselves on a self-guided Hemingway walking tour.  As in, we walked past the hotel he and Hadley stayed in on their first night in Paris, we strolled by the long line of bouquinistes that he used to dig through for books, we wandered around Shakespeare and Company, saw the market on Rue Mouffetard and had a mid-day drink at La Closerie des Lilas.  After we grabbed a spot at the bar, I realized there was a little Hemingway plaque right where I was sitting! 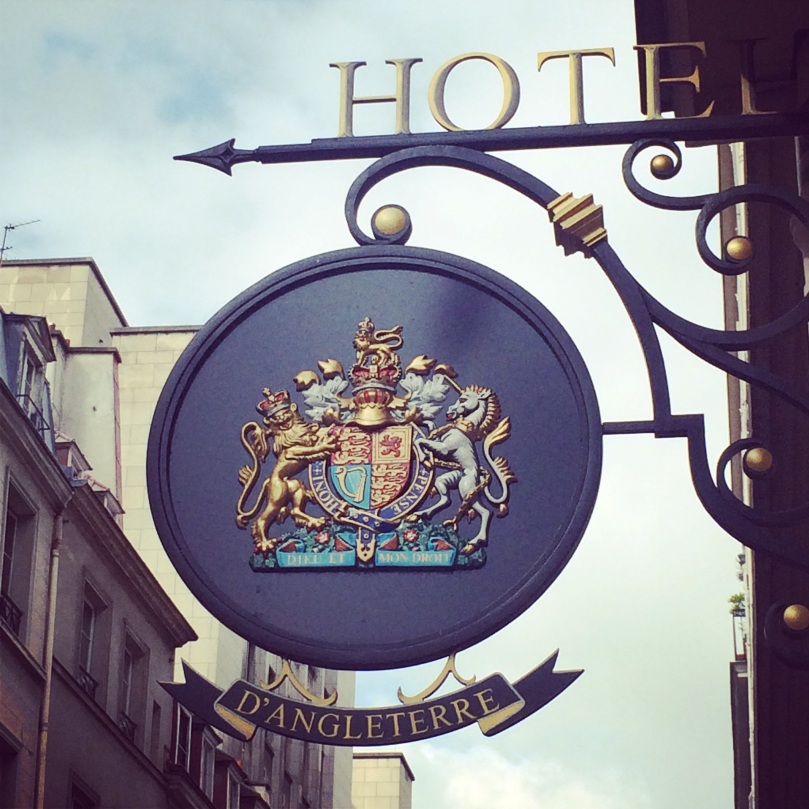 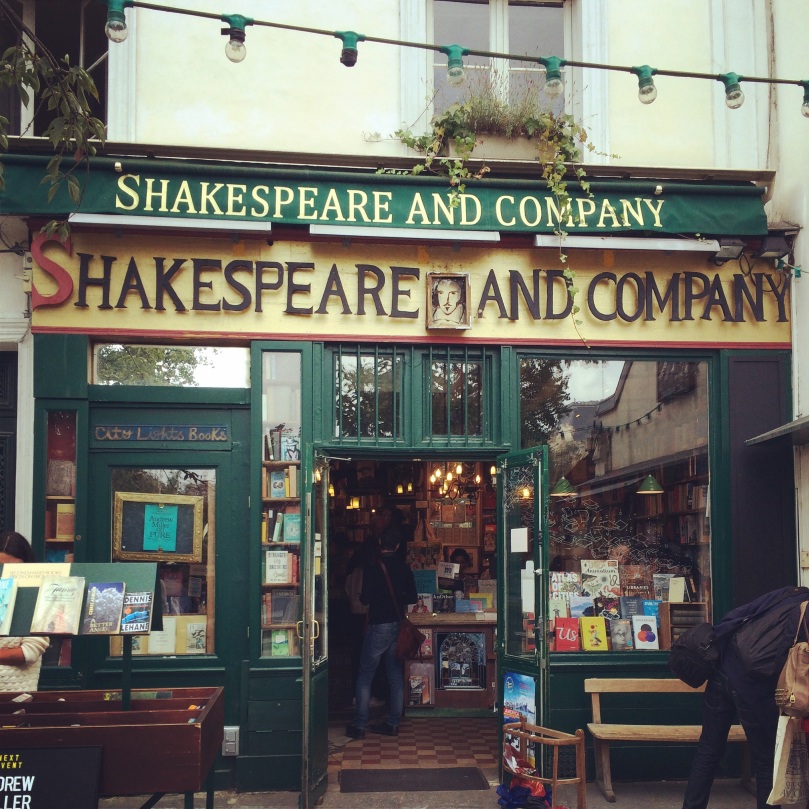 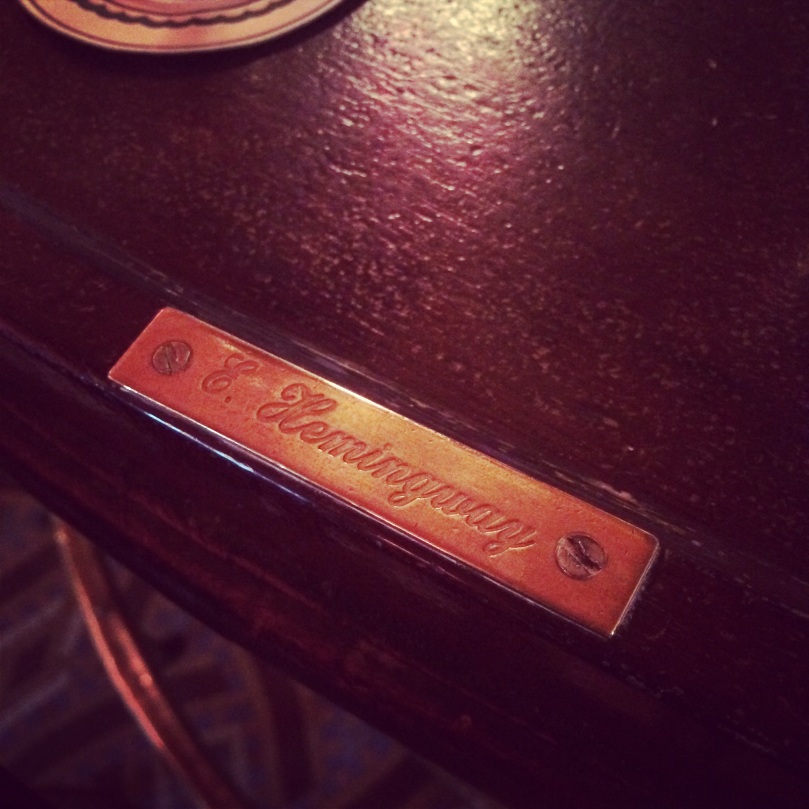 Our last stop was Luxembourg Gardens.  It was SO BEAUTIFUL.  It was clean, quiet, filled with Parisians relaxing with the news paper and it was in full bloom.  Right out of a picture, I’m telling you.  I took the opportunity to grab a crepe at a stand inside the gardens and after a small mix up, ended up with a chocolate ice cream cone instead of a hot chocolate.  I mean, I’m usually not one to complain about ice cream but it was cold, I was in a dress and I was freezing.  Ice cream didn’t have quite the warming effect I was hoping for but we did get a good laugh out of the mix up 🙂 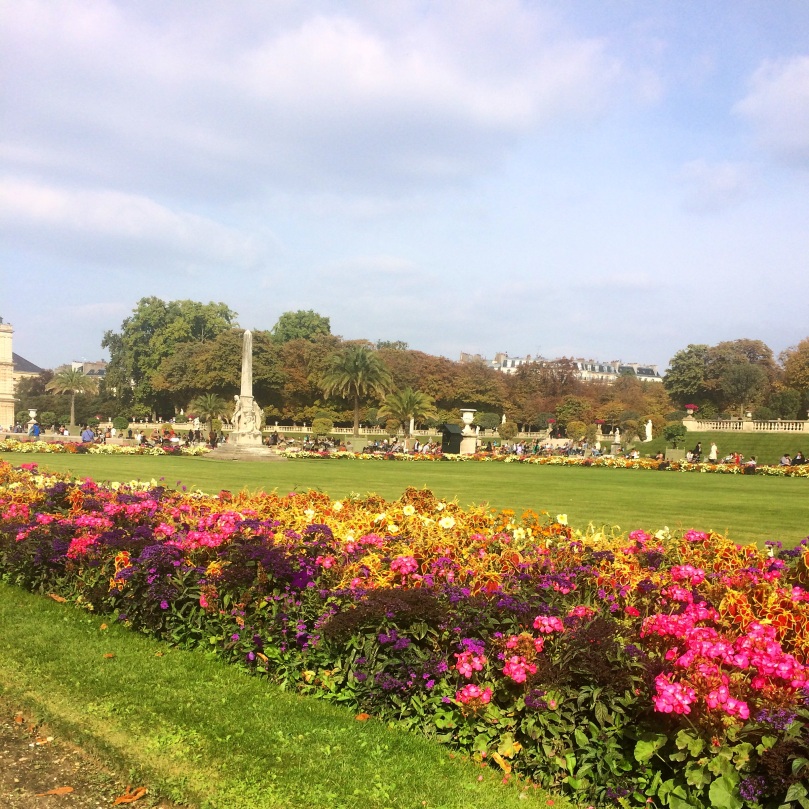 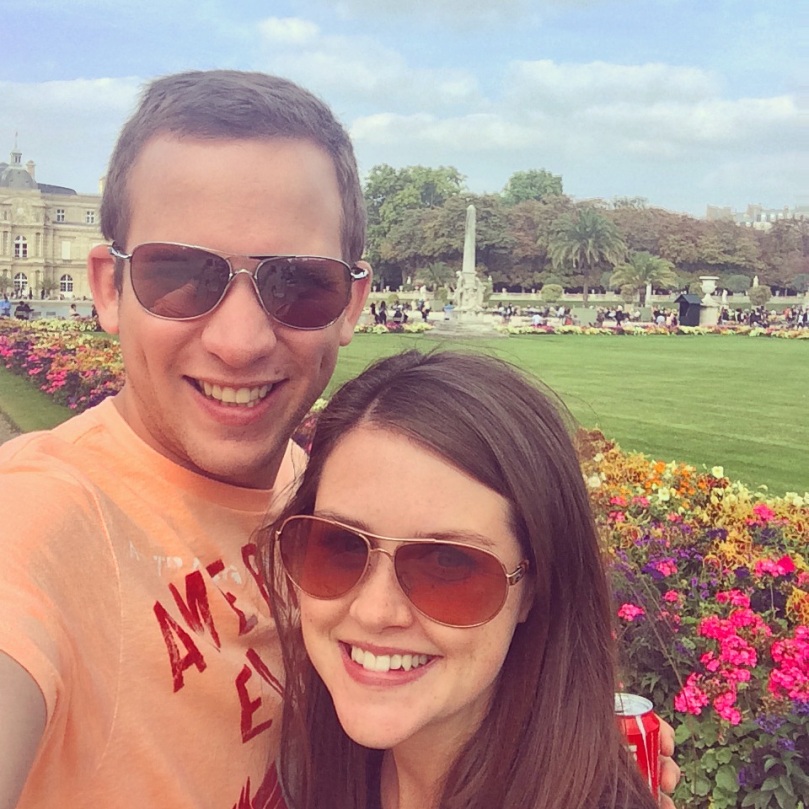 Around sunset, we took a river cruise.  It was, in a word, perfect.  I mean, it was cold, we could barely understand the tour guide and the couple opposite us was unknowingly photobombing every photo we took, but gosh is Paris pretty at sunset.  We passed under some of the most breathtaking bridges, saw the Eiffel Tower (for the first time!), watched river side dance lessons and loved every single second. 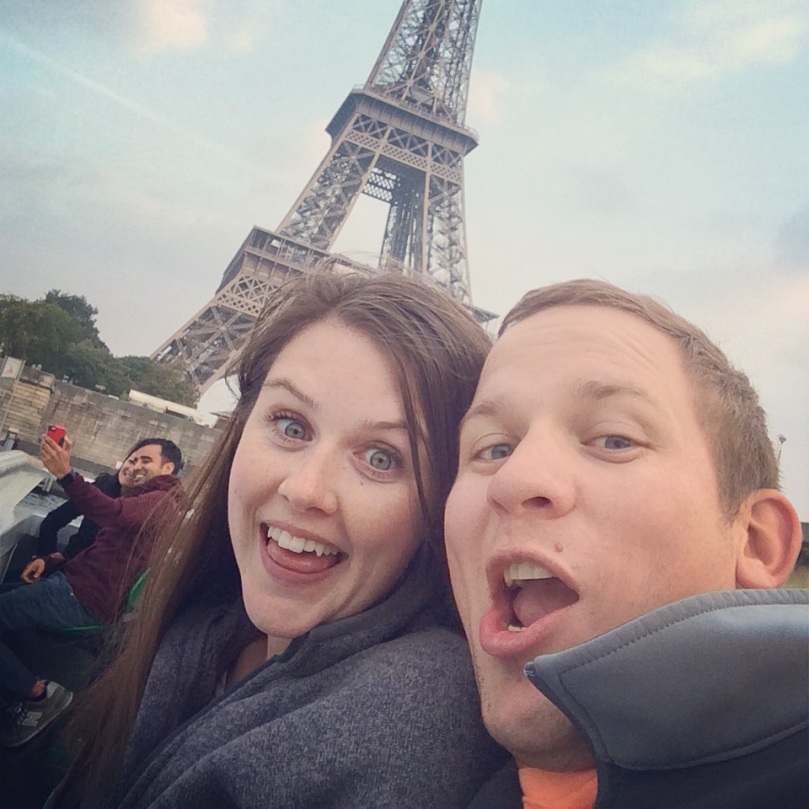 And just when I thought Day 3 couldn’t be beat, Day 4 came along (and Day 5 after that, but that’s a post for another day).  We started with breakfast on the Champs Elysees (Joey was totally awake…) then took a quick walk down a ways and back to see the important sites, like the world’s busiest McDonald’s (or is it the most money-generating McDonald’s?) and a three-story Louis Vuitton.  Or more importantly, Le Grand Palais (and matching Petit Palais) and the Arc de Triomphe. 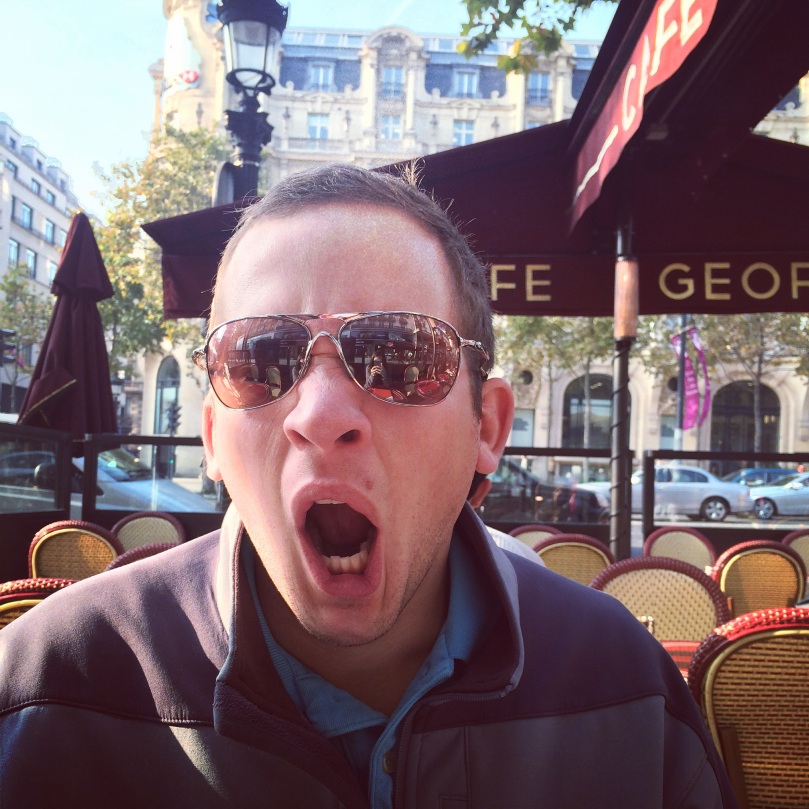 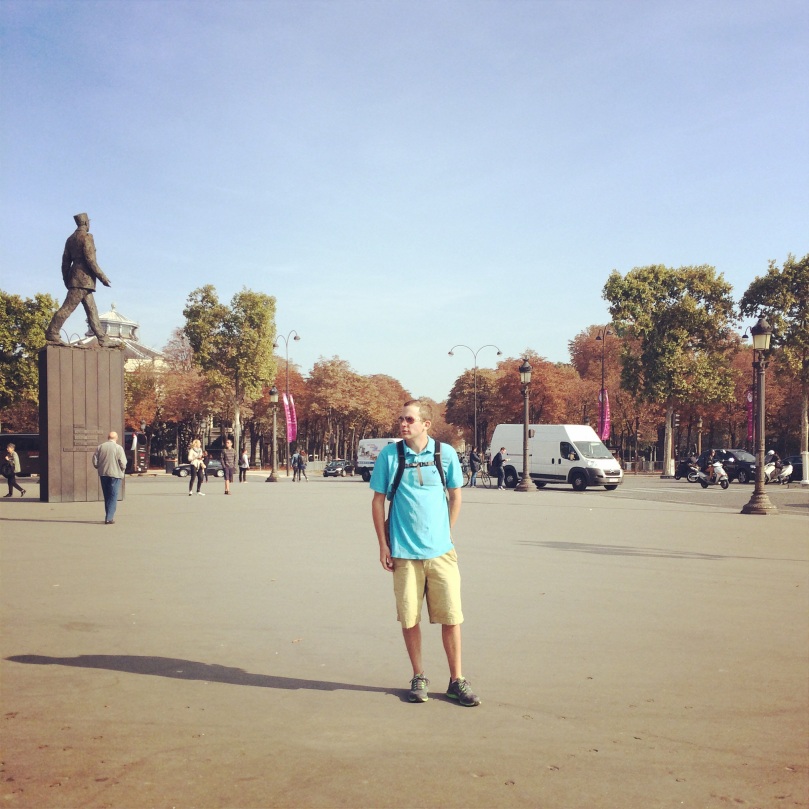 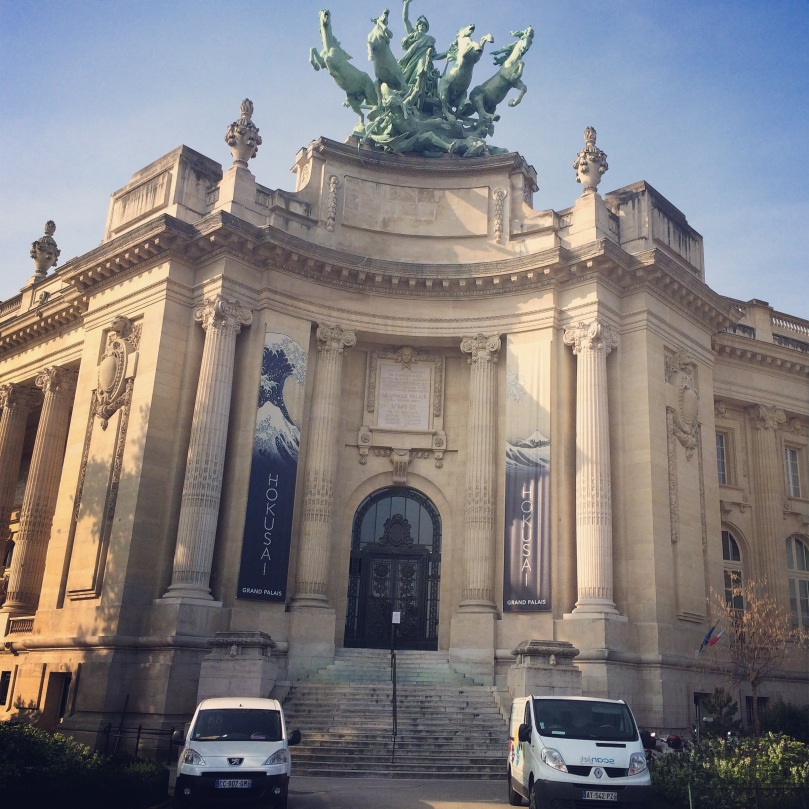 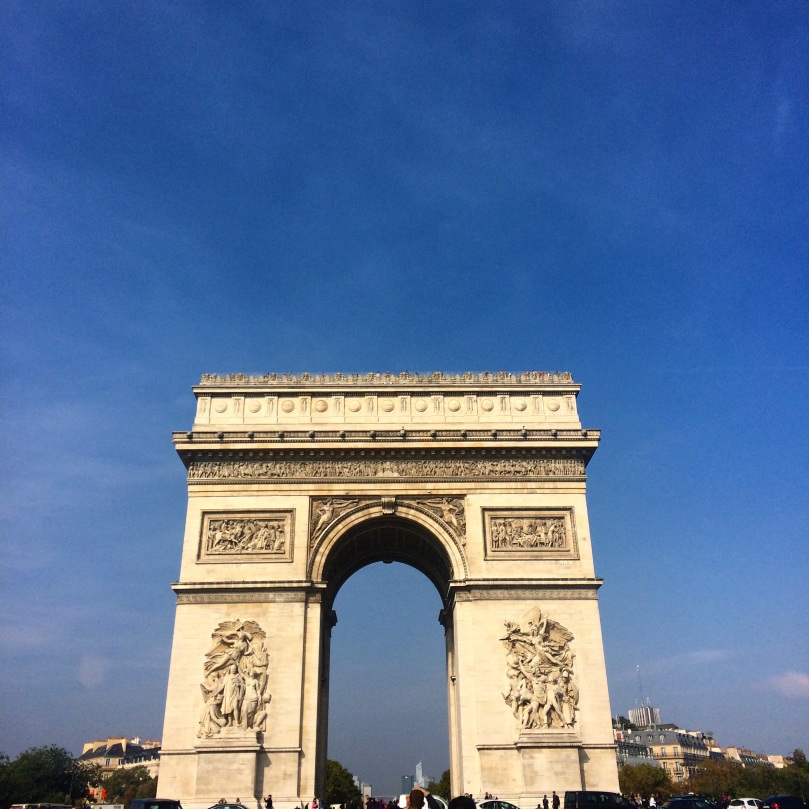 Everything about the Arc is incredible.  The climb to get to the top, the views once you’re there and all the traffic moving in a circle around it.  I think Joey would’ve been content to just stay up there and watch the cars for hours.  But alas, we had bigger and better things to see… The Eiffel Tower! 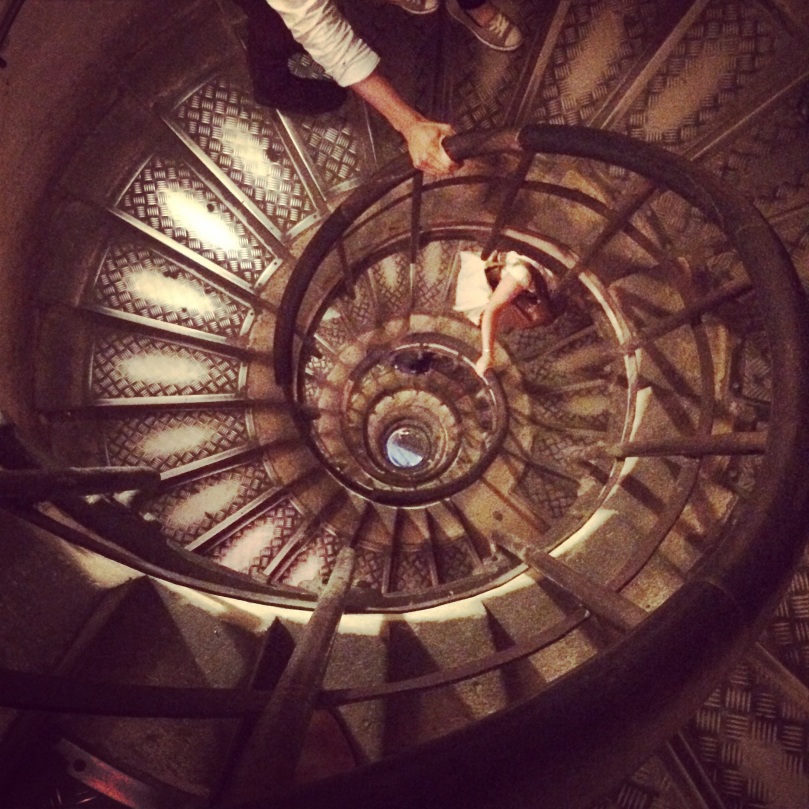 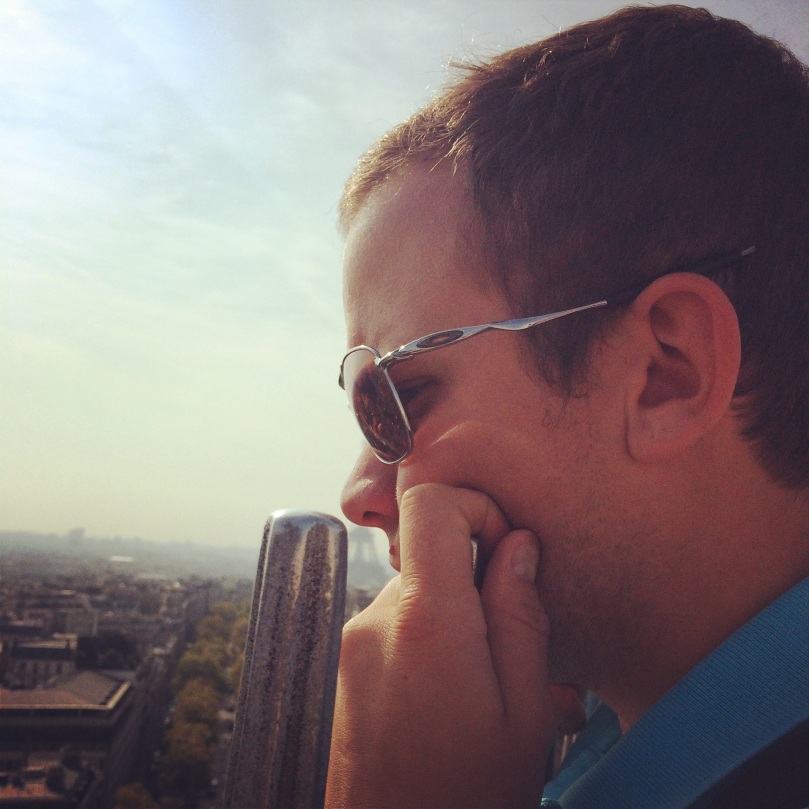 Brace yourself, it’s about to get real cliche up in here.

We walked through a nearby neighborhood and put together a little picnic lunch.  Another American couple kept ending up at the same places we were at and I thought we should maybe be friends but then I decided to just let them have their vacation to themselves (though they did end picnic-ing a couple feet from us!).  Then we feasted on hunks of baguette*, sausage, real French cheese, fresh figs and macarons.  Oh and an entire bottle of wine, naturally!

*In France, it’s totally custom to be walking around with one (but usually more!) fresh baguette(s) under your arm so I was pretty excited to “do as the French do,” and after doing so, I can honestly say I have no idea how the French do that without digging into the bread.  It took so much self-control not to eat that baguette while we walked over to the tower. 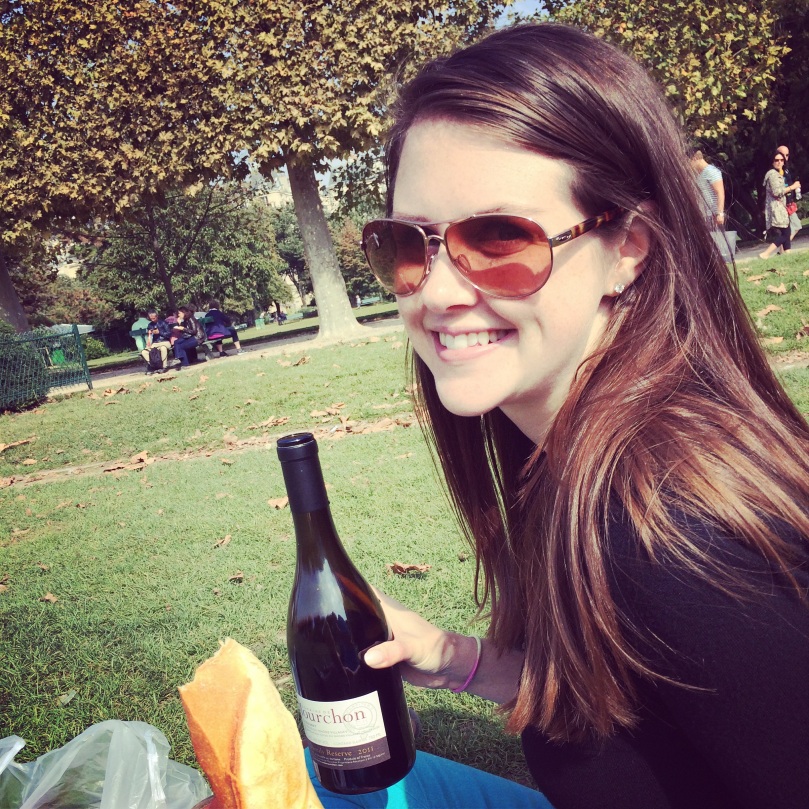 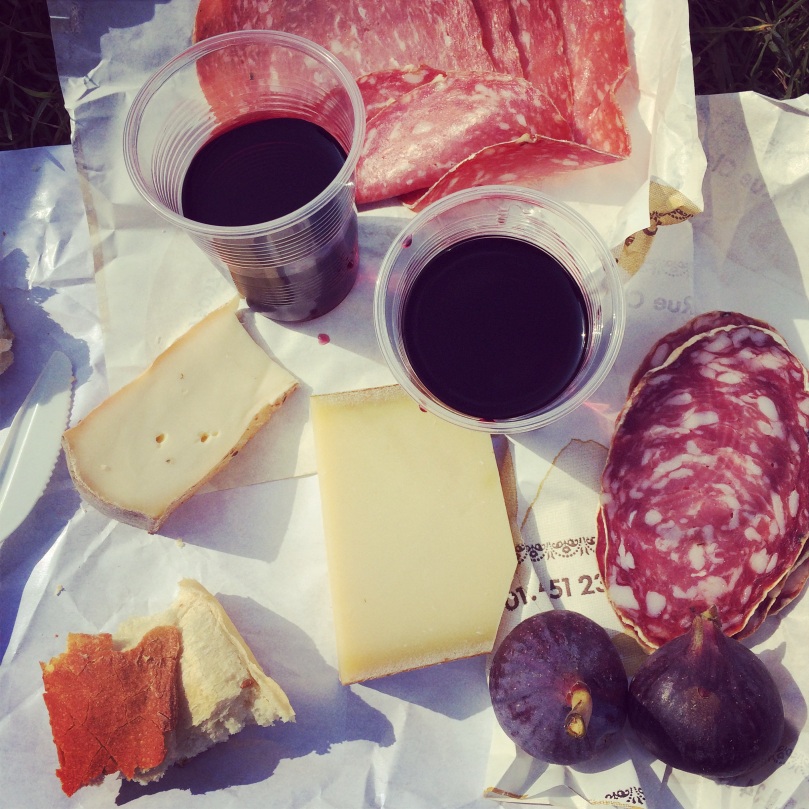 Post-picnic picture-taking frenzy ensued after all the food (and wine) was gone.  We watched so.many.people. spend so.much.time. trying to get the perfect “jump picture” in front of the Eiffel Tower so I was majorly confused when I just used the burst feature on my iPhone to capture a perfect one of Joey in one try. 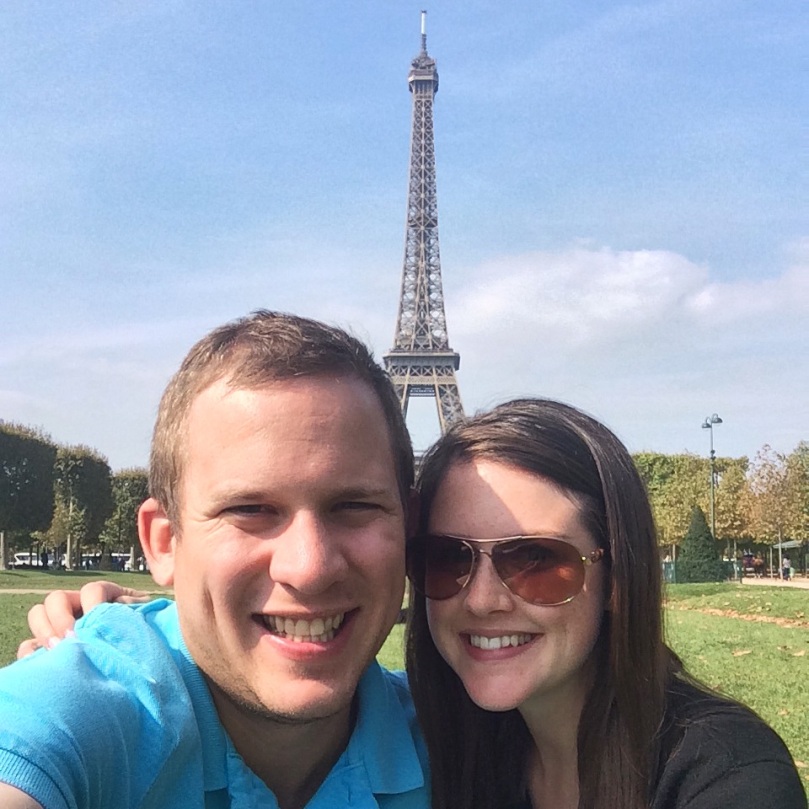 Sitting in front of the Eiffel Tower was SO surreal.  You don’t expect a giant metal structure to be so beautiful or romantic.  It’s hard to describe, so you should probably just see it for yourself 🙂  After a brief nap in the grass (see above regarding an entire bottle of wine), we ventured up to the tower to brave another set of stairs — 710 stairs to be exact!  We bypassed the elevator line and walked up to the second floor, stopping to stand over the glass floor on the first floor (Joey was NOT a fan!). 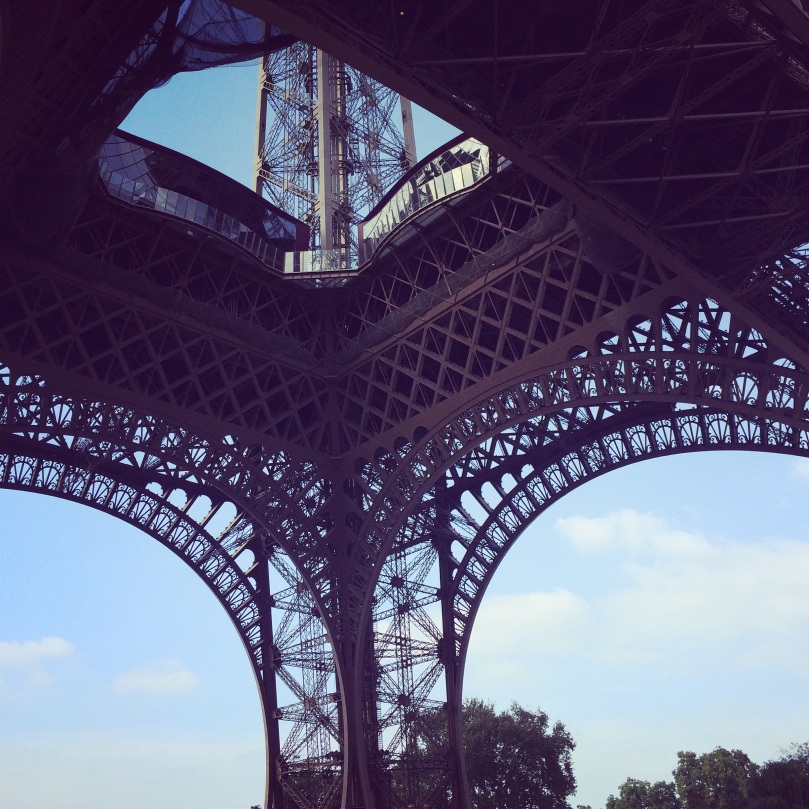 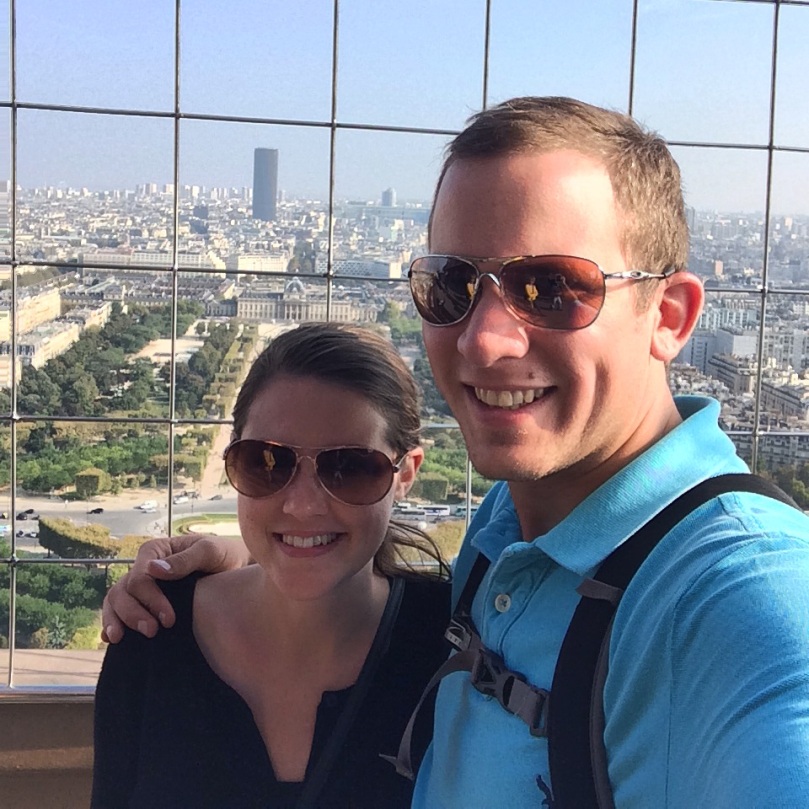 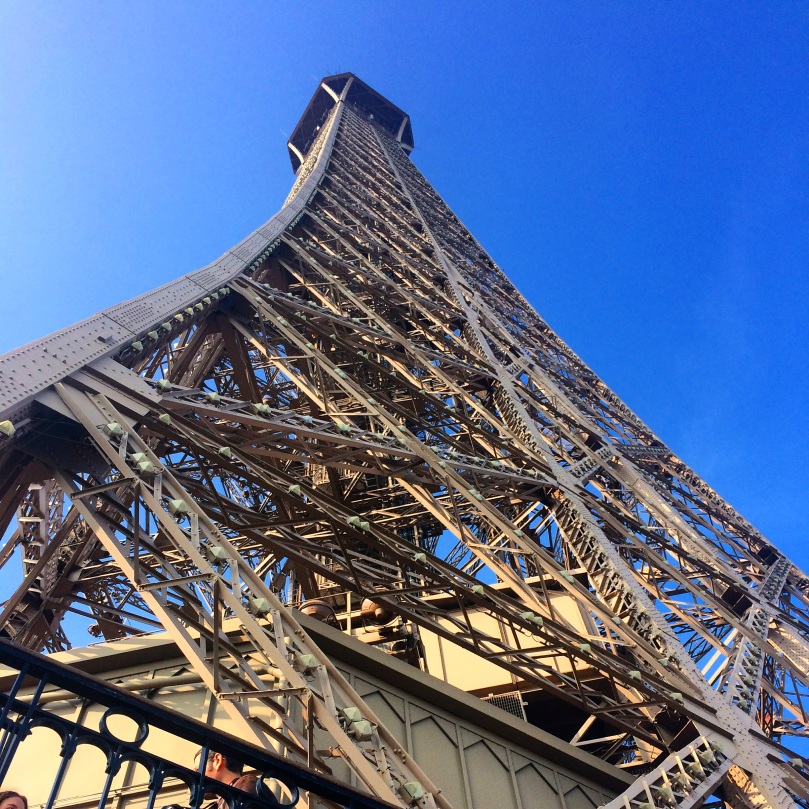 At this point, we planned on buying tickets to the very top, but for some reason the ticket window was closed and we could not for the life of us figure out where else to go to buy tickets so we gave up.  I’m usually the one who’s terrified by heights but I was all “had a bottle of wine at lunch and am feeling brave” and Joey ended up being the one who felt kind of freaked out about going any higher.  So we just enjoyed our second floor view then took the elevator back down.

No regrets from me.  That view was BREATHTAKING.

Next up, our very last day in Paris.  Which includes Edith Piaf’s grave, a trip to Versailles, the sad end to my wide brimmed hat, the most amazing dinner ever and that time I cried when I saw the Eiffel Tower all lit up at night (I’m so not kidding).  Wishing you all a Happy Friday and a Wonderful Weekend!