The good news is we got the landscaping done, the grass looking green and lush, the fence painted and reassembled and all six tons of rock moved by Saturday at 5 PM, then it was straight summer BBQ-ing time!

Curtis is our new door stop.  A few people had never seen our house before so Joey was impressing them with the opening line of “we have a black widow!” and I was saying stuff like “welcome to our 85° home!”  What is wrong with the both of us?  P.S. My house was/is so clean right now, that I’m afraid to do anything that will mess it up.  I want it to be this way forever!

Also, we both managed to pick out sherbert-colored shirts.  Like Bobby so honestly put it, it was mostly embarrassing because we were in our own home and one of us easily could’ve changed but didn’t… I’m claiming we were just trying to make it easy for everyone to locate the party hosts. 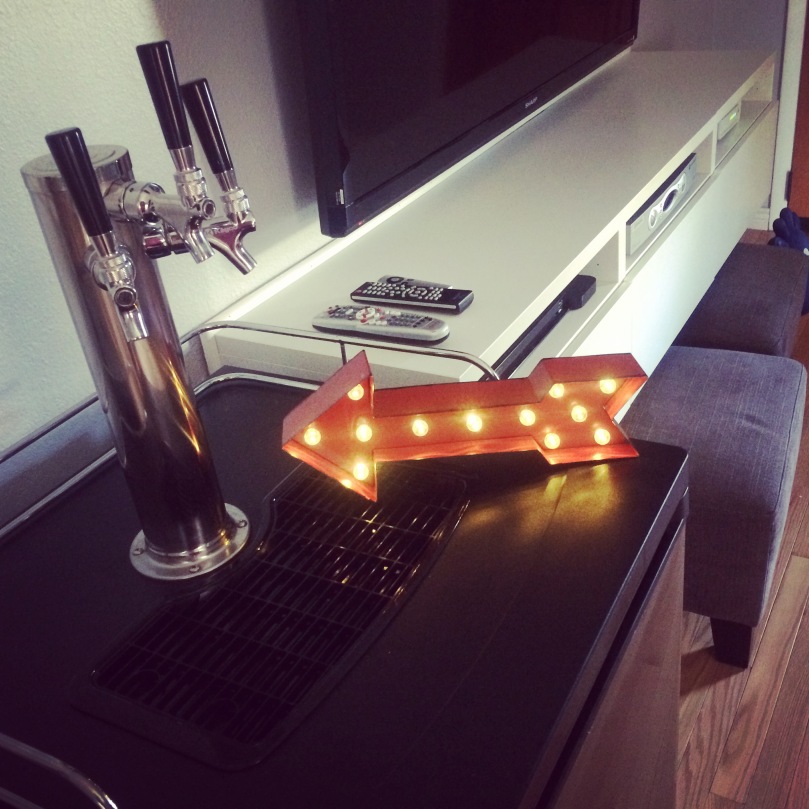 This way to beer!

My tried and true sangria recipe.

Thanks for showing me how to cut a watermelon, Geoffrey Zakarian.

We brewed a “knockoff Blue Moon,” hauled the kegerator outside, mixed up some sangria, cut a watermelon and cooked some baked beans for the occasion.  We also grilled burgers and brats and may or may not have run out of propane mid-BBQ.  We definitely knew better than to not refill the propane tank.  Joey claims I drank that entire pitcher of sangria by myself.  All I know is I had a wine flush like whoa.

We did things pot-luck style and everyone brought such good stuff.  I’m still kicking myself for not grabbing a deviled egg right away because they were totally gone by the time I got a plate of food.  I should’ve known they’d be the first thing to go — they had bacon in them!  Mom brought coleslaw, potato salad and mini oatmeal cookies.  Then she left the leftovers with me.  I’m not complaining.  And Becca made sangria cupcakes!  They were so good that I was immediately compelled to hug her.

Of course we broke out the fire pit later in the night.  Then we listened to Third Eye Blind, talked about Ashley Parker Angel’s butt and you know… drank some more sangria.  Or was that just me?  After everyone left, Joey and I cleaned up, hauled the kegerator back inside (which, for the record, is harder to do after you’ve had a few drinks) and chilled in the hammock while John Mayer played in the background.  Translation: PERFECT NIGHT. 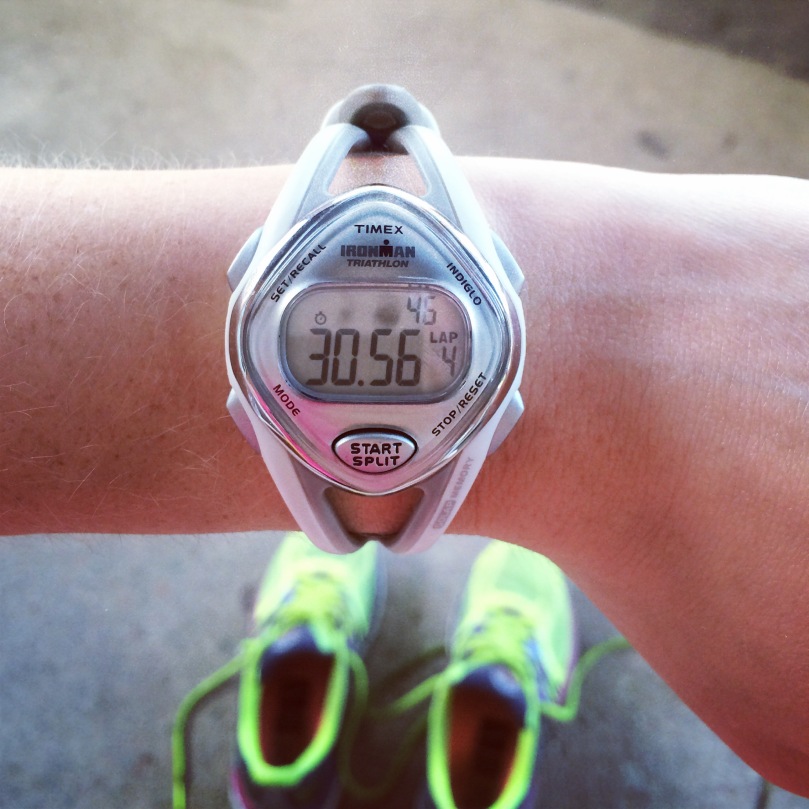 Joey left to go golfing at 7 AM the next morning and I was like “okay cool, I’ll just sleep in then.”  Then I rolled out of bed, took myself on a slow and steady 3-mile jaunt — I must’ve been in a good mood because twice someone’s dog ran after me and I wasn’t even mad — then ate breakfast and read on the front porch.  It doesn’t get better than that.

I’ll be real honest, I basically read, napped and watched TV for the rest of the day.  Though I did get Joey to go on a post-nap evening stroll with me.  I was saying how nice it was to basically do nothing all day and Joey pointed out that this was our first taste of real (yard work-free) summer.  More, please!  Wrapped up the evening with a summer squash soup, Food Network Star, Big Brother and a slice of cherry pie because, SUMMER.

Happy Friday!  Last night Joey and I gave our white picket fence a fresh coat of paint, brewed beer, had pizza delivered and watched Big Brother.  The sun was out till 9 PM, there was so much extra daytime and summer is the best ever! 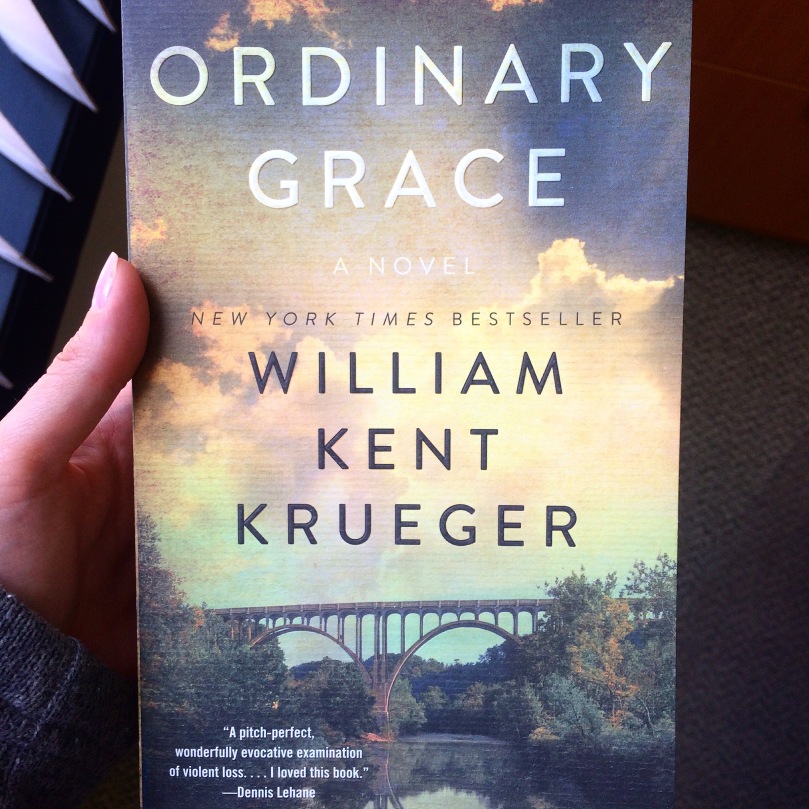 In other news, this week I finished book club book #4, Ordinary Grace by William Kent Krueger.  It was one of those books that grows on you and by the end, you’re sad that it’s over, ya know?  The narrator is Frank Drum, who recounts growing up in a small Minnesota town during the summer of 1961.  Though he’s an adult at this point, he tells the story as he experienced it, as a 13-year old who’s still got a good sense of childhood naivety and innocence.

There are five deaths that summer, one of which being Frank’s (and younger brother Jake’s) older sister, Ariel.  That’s a lot of death for one small town and a lot for a kid to take in, so we get to see Frank coming to terms with the realities of life and how that plays into his belief system.  And as death is very much a part of real life and something we’ve all had to encounter, I think the plot had a relatable feel to it.

Kent Krueger did what I think is a somewhat difficult writing task and that’s creating an interesting (and believable) plot while still giving attention to his characters.  I find that most books lean towards one of the other, but this one had an attention grabbing plot and characters, whom by the end, you really felt like you knew.  I loved that!  Also, it had this Stand by Me type of feel, what with the whole young boys find a dead body thing.  As a fan of that movie, I’m A-OK with reading a book that reminds me of it 🙂

What are you reading this summer?