It was a weekend of finales — we watched the final season of Veep, I woke up from a nap to hear Joey watching the final scene of Big Bang Theory and Game of Thrones, of course — and a weekend of me saying I was going to do stuff and then… not doing that stuff — going out to dinner, running 5 miles, buying a dress for a wedding — but I also got to watch Joey accept an award and finish a half marathon and we finally planted our garden!

Also, SPOILER WARNING because I’m definitely talking finales of all sorts in this post.

Friday, after work, we headed to Mile High (or whatever it’s called now) to pick up Joey’s race packet and despite how OVERJOYED he was at getting bib number 303, no one else commented on it 😛  We went home afterward to walk and feed Andi then spent way too long trying to decide if/where to go out to dinner then ended up staying in.  We’re the most fun!  But actually, putting on my pajamas, eating leftover enchilada casserole and watching the final season of Veep felt 100% right. 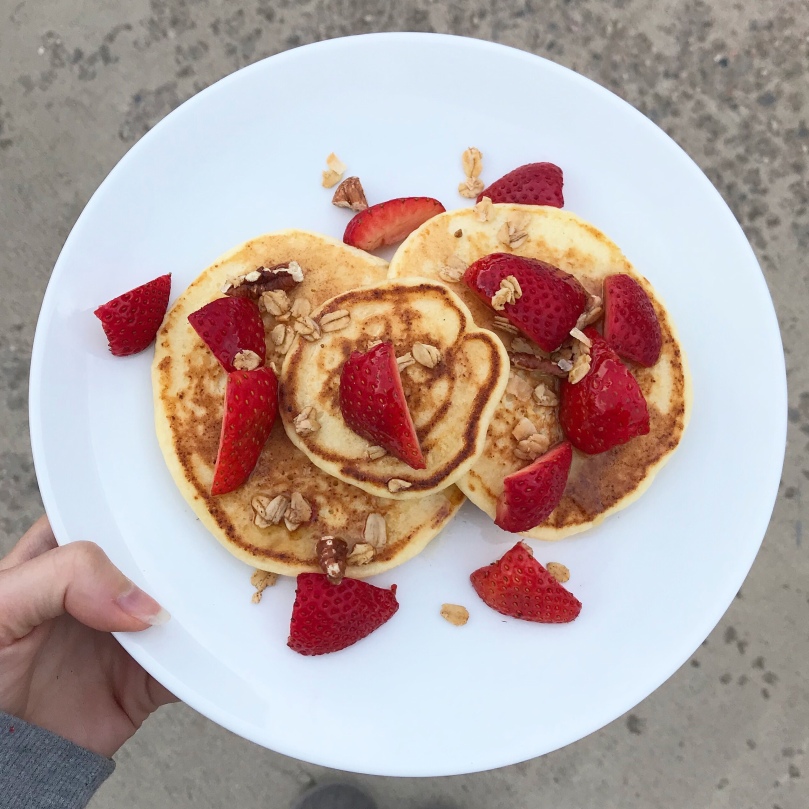 I set my alarm to run Saturday morning and then asked myself if I really wanted to do that or make pancakes and guess what the answer was!  We used our leftover ricotta to make these and wow, I forgot how good they are!  Afterward, we headed to Paulino Gardens and it was A) packed and B) pretty picked over.  I don’t know if it was because it’s already mid-May or because they’re closing at the end of this season but it was sort of nuts in there.  We managed to leave with most of what we needed but we’re still at a loss for what to plant in the shady part of our yard.  Also, Joey stood in line for something like 40 minutes while I stayed warm in the car and ordered us lunch delivery 🙂 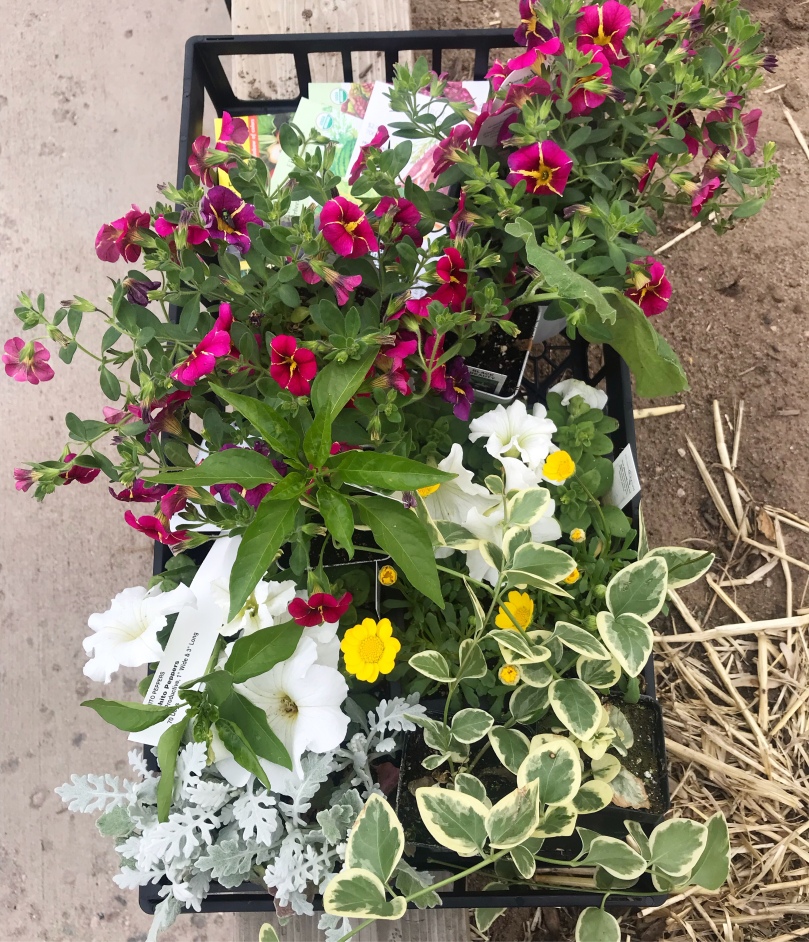 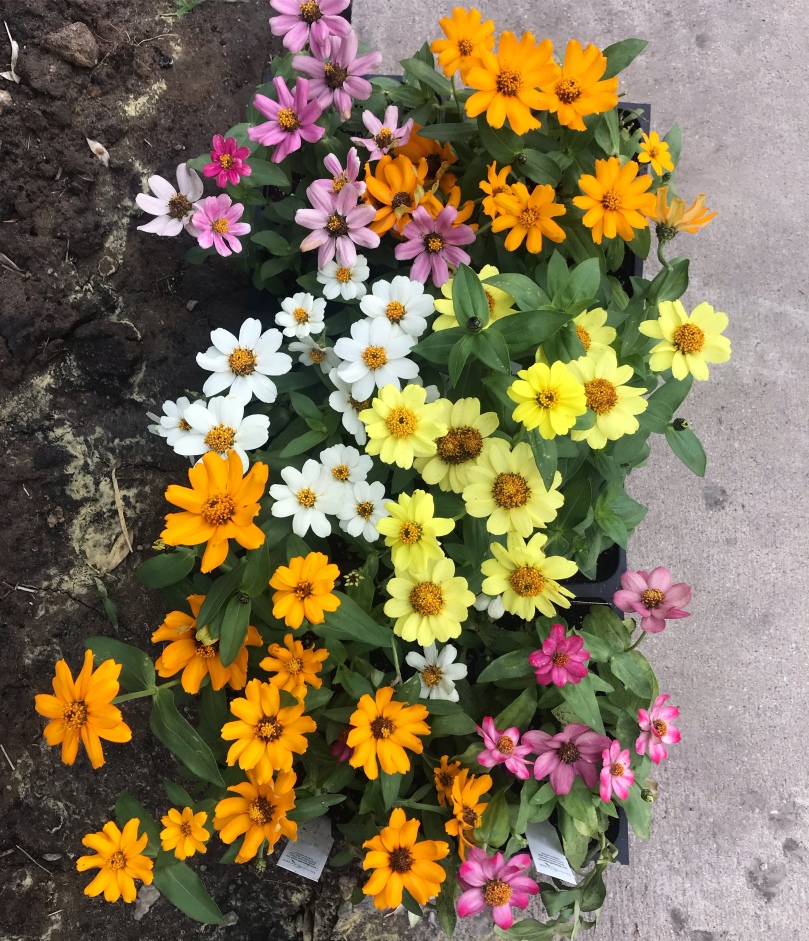 I fully planned on heading to the mall afterward but it was already past 1 PM, we had somewhere to be at 6 PM and I still needed to shower and go to the grocery so dress shopping got the ax.  We spent the evening at a work-related gala where we were fed a family style meal of not nearly enough food (my top concern, obviously), but our company won an award, so I guess that’s cool!  Back at home, we watched a few minutes of SNL (oooh, another finale!) then went to bed because Joey had a race in the morning and I was dropping him off. 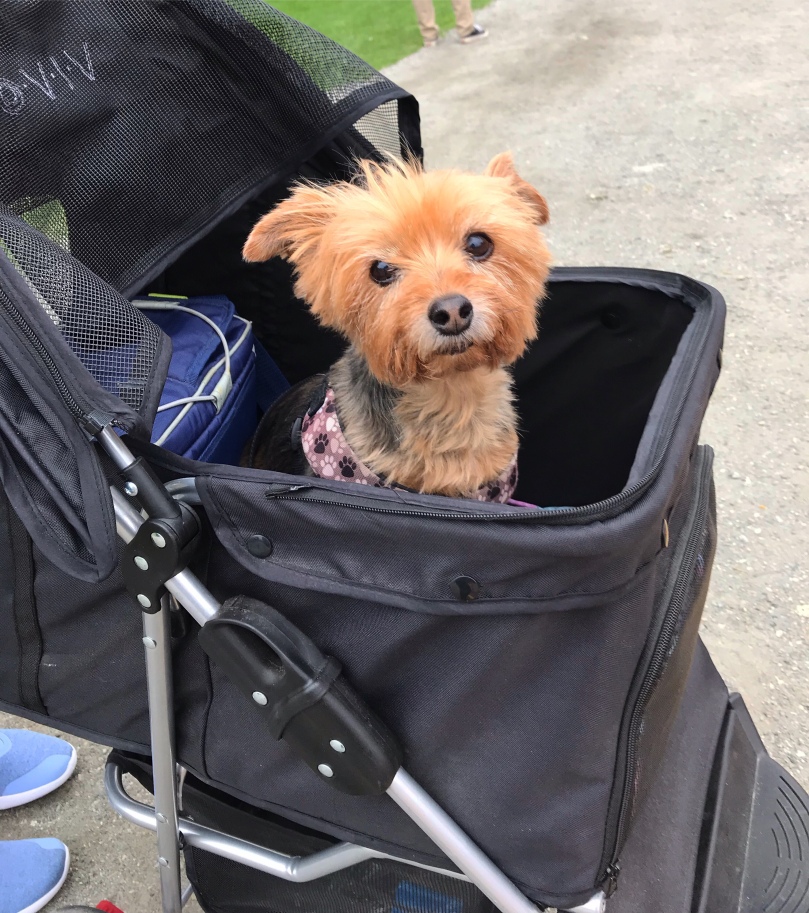 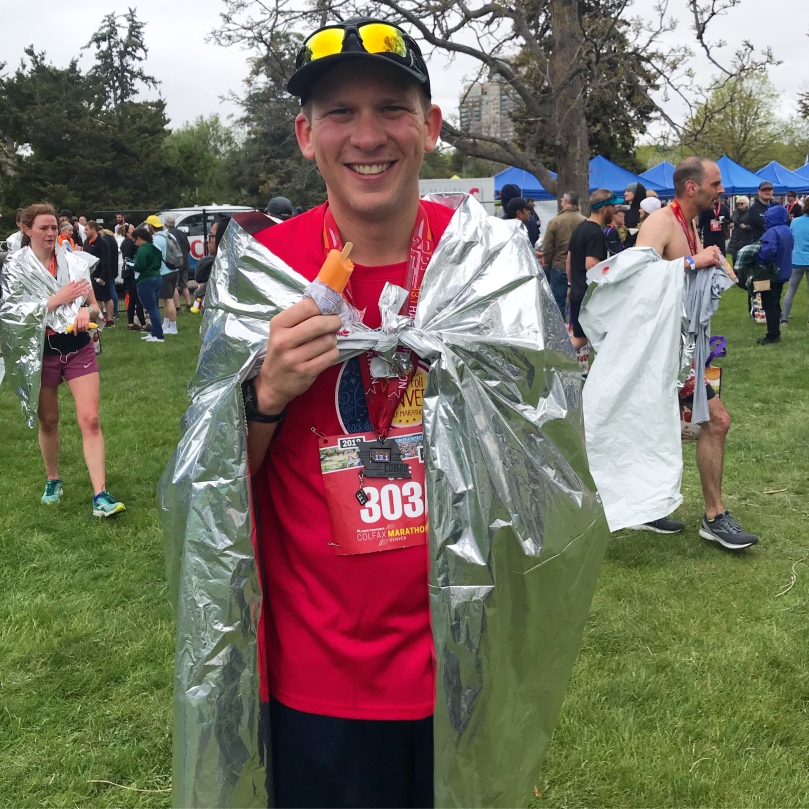 First time at the Colfax Half Marathon and the parking/traffic situation actually wasn’t bad.  Joey’s race started at 6:45 AM which seemed really early to us (the marathon started at 6!!!) so I dropped him off around 6:15 then headed back home to make myself some coffee before Lori picked me back up.  I think we took a really long route to the finish line, but Max seemed content in his stroller ♥  Joey cruised in at 1:37:59 which is a new PR for him and I was so proud!!!  He and I had a celebratory breakfast at Onefold afterward and then I went home and took a nap.  Wait, did I actually run the half marathon?? 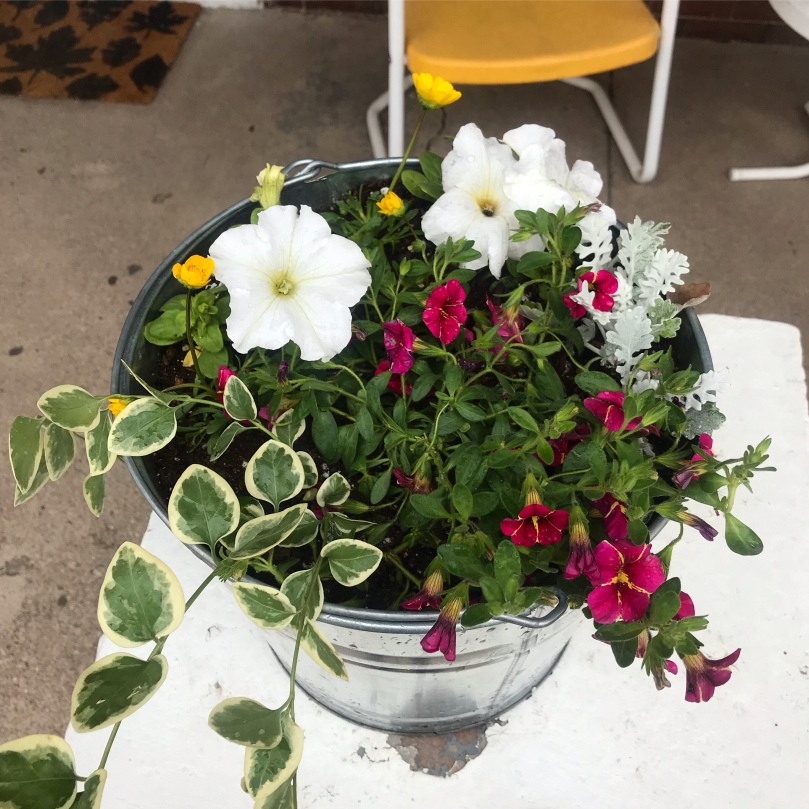 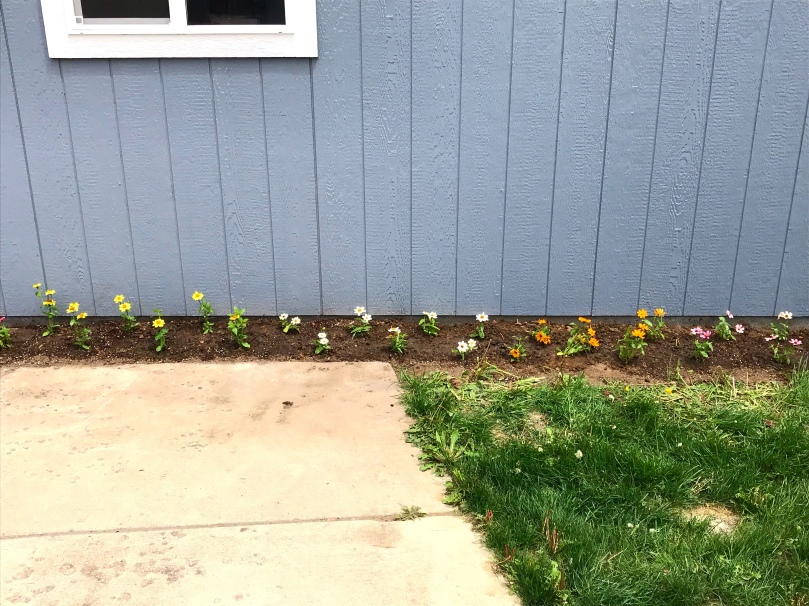 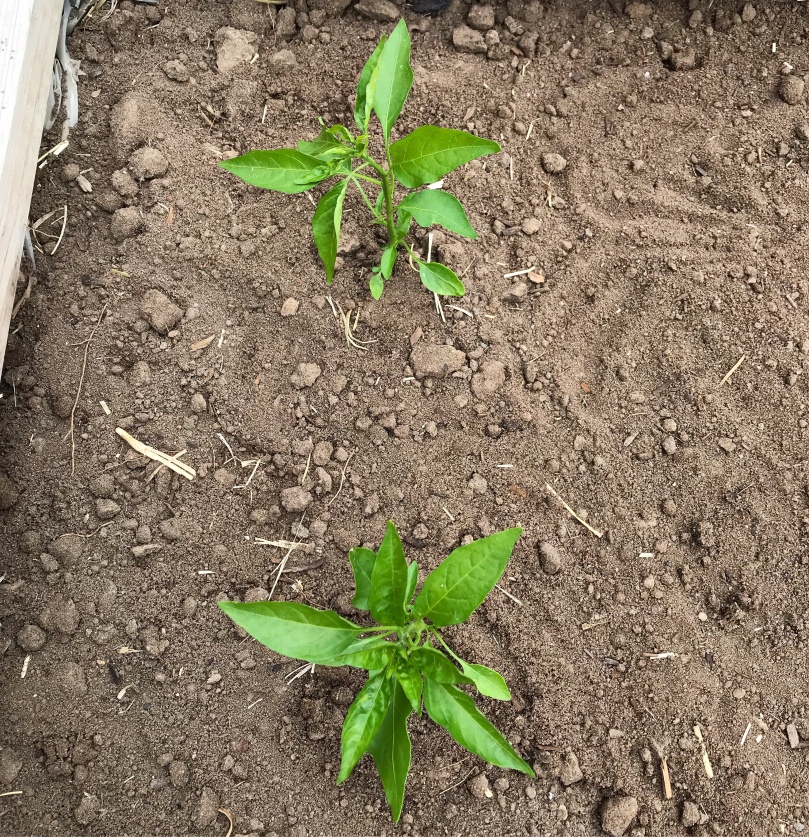 Post nap, we regrouped outside and did some planting.  I thought of my mom the whole time I assembled my planter pots since she bought them for me and is such a gardener at heart ♥  We also got our garden seeds in, plus these shishito plants that I am legitimately SO EXCITED about.  Fingers crossed!  We lost our garden bed when we built our new garage but then they left us that little strip of dirt and it looked perfect for a row of flowers.  I took myself to yoga afterward and Joey kept on working like he hadn’t run 13.1 miles very early that morning!

Came home to make salads for the week, finish up Veep, eat dinner and watch Game of Thrones.  Before I get to GOT, can we give it up for Veep?!  What an incredible, hilarious, vulgar, expertly crafted show.  Everyone gives an amazing performance but Julia Louis-Dreyfus is just PHENOMENAL.  What an all-time character!  We are so lucky to have her comedy genius in this world.

Guys, I was so ready but also not at all ready for the finale of Game of Thrones.  This season has been so strange and rushed and up and down.  I don’t think it’s any great secret that the show runners couldn’t quite get it right without the books as source material, plus this is a show built on long term development being condensed into six episodes and that just doesn’t work.  I won’t say I hated all of this season because the visuals are still (mostly) amazing and I thought this season had some nice acting and moments that I really felt in my heart but it also had far too many unanswered questions, logistics that just didn’t make sense, important scenes left unshown and character arcs that felt unsatisfying or worse, unnatural.  I feel real sad about some of it (Dany), real annoyed by some of it (Bran??) and real thrilled about some of it (QUEEN IN THE NORTH, BABY!).  I’m sure I’ll spend the rest of the week processing it all, but what a ride it’s been!  What are we all watching together now??

They came, they saw, they awarded Green Book Best Picture?  My first reaction was “WHYYYY?”  But my second was “at least it wasn’t Bohemian Rhapsody!”  There were so many good moments during this show — Brian Tyree Henry in that outrageous costume, Keegan-Michael Key descending from the ceiling holding an umbrella, Spike Lee jumping on Samuel L. Jackson, a surprise Olivia Colman win — but to end it with a speech from a guy who backed up Trump’s claim that Muslims in New Jersey were cheering when the towers went down on 9/11 is a bad look.  Roma was robbed!

In other news, we had a for real blizzard on Friday night and I’ll be honest, I didn’t even know it was supposed to snow.  One minute you’re driving to dinner and the next, you’re walking back to your car through 3″ of snow!  Vine Street Pub was still packed though and even though I ordered and drank a stout, I still don’t like a stout.  We rented A Star is Born afterward because: “I just wanted to take another look at you.”  Upon re-watching, I still think it’s very very good.  I’ll watch the Streisand version soon though, for all you Generation X-ers who still think it’s the best one (is it though??).

Saturday started with 6″ of glittery snow + Whole Grain Chocolate Chip Pancakes, then ended with a family birthday celebration and baby time.  (Actually, it technically ended with Carrot Cake ice cream and You Were Never Really Here but I’m still totally confused about that movie, so let’s not get into it.)  In between was grocery shopping, kombucha brewing, catching up on TV from the week and an exciting time of me cleaning the bathroom.  Elliott is still the cutest and the smallest ♥

Please be proud of me for actually taking pictures on Sunday!  We woke up and headed to Onefold for giant breakfast burritos and March plans (we’re going to make green pasta!) but mostly because my sister had gone the morning before and I was jealous.  Afterward, I walked to Base Coat to have my nails done for our vacation on Wednesday and a Mardi Gras trip to New Orleans seemed like a good time to pick a purple sparkle polish.  Also, on my walk back, I helped an older man with a cane and a boot get over the snow-packed curb and who needs drugs, alcohol or exercise endorphins, when acts of kindness work just fine?

Before I headed to yoga, I filled out my ballot and made some Buffalo Wing Popcorn — it turned out amazing, but man, making caramel is incredibly stressful! — so I’d be all ready for the Oscars once I got home.  Joey surprised me with an Oscar Gimlet and I was so happy and excited, plus it tasted amazing.  Say what you want about that performance of “Shallow” but I thought it was perfect and I don’t know, maybe we don’t need a host ever again?  I went 15 for 24 on my ballot, which isn’t great, but Glenn Close not winning really threw me for a loop and even though I said I didn’t want her to win, I felt instantly bad when she didn’t.

In all sincerity, I actually quite liked Green Book after we saw it, but then so much was said about it afterward and it really made me re-evaluate and ultimately, change my mind about it.  Plus I saw a lot of movies afterward that I found more interesting, more honest and more willing to engage with the messier parts of this world, so I can’t agree with this outcome.  Just going to focus on Greta Gerwig ‘s Little Women reboot, starring Emma Watson, Saoirse Ronan and Timothée Chalamet that’s coming out later this year instead 🙂

What did you think of the Oscars?

New Year’s Day is quickly becoming my favorite holiday. I love making a little dinner spread for my family and chatting with them all night. There’s no better way to ring in the new year ♥️🍾
2019! You are all correct, Italy IS the best!!! Plus 5 YEARS and a little Thanksgiving Day family photo ♥️
Merry Christmas!
Went with something real different at our book swap tonight! #GirlyBookClub #FantasyHereICome