Well, I was joking when I said I’d be recapping our wedding and honeymoon through the rest of the year, but here it is almost halfway through December and I’m still going.  This is it, though!  Our final day in Paris (followed by one delayed flight, one missed flight, four movies, lots of jet lag and my mom holding up a welcome home sign), could not have been more perfect. 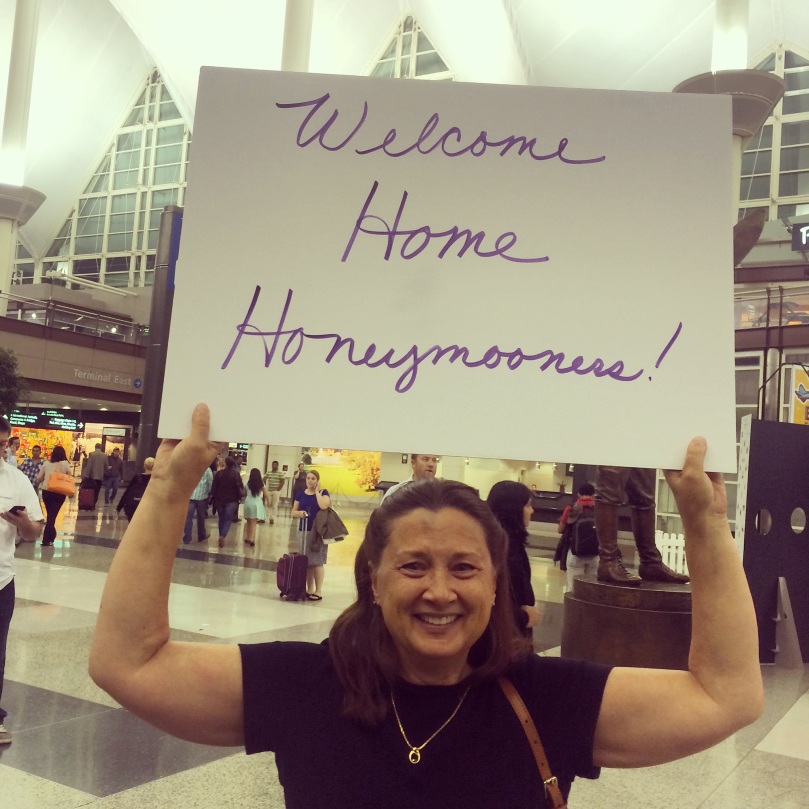 We had planned to spend the day at Versailles but upon second thought, I decided I really wanted to see the Père Lachaise Cemetery, where some pretty famous graves are located.  So we made our way there first thing in the morning.  The cemetery itself was really incredible.  It was like a giant version of the cemeteries I’ve been to in New Orleans.  And early in the morning, when it’s still foggy and there’s no one there, it’s extra beautifully chilling. 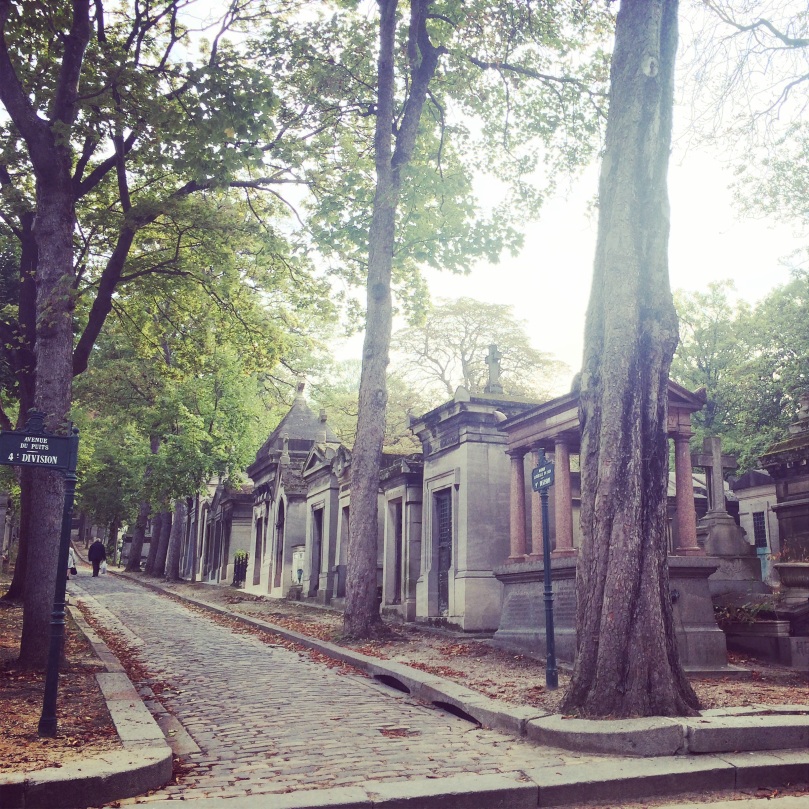 We strolled about, saw the graves of Jim Morrison, Oscar Wilde, and Edith Piaf then got on a train to Versaille, which is about a 40-minute ride from Paris. 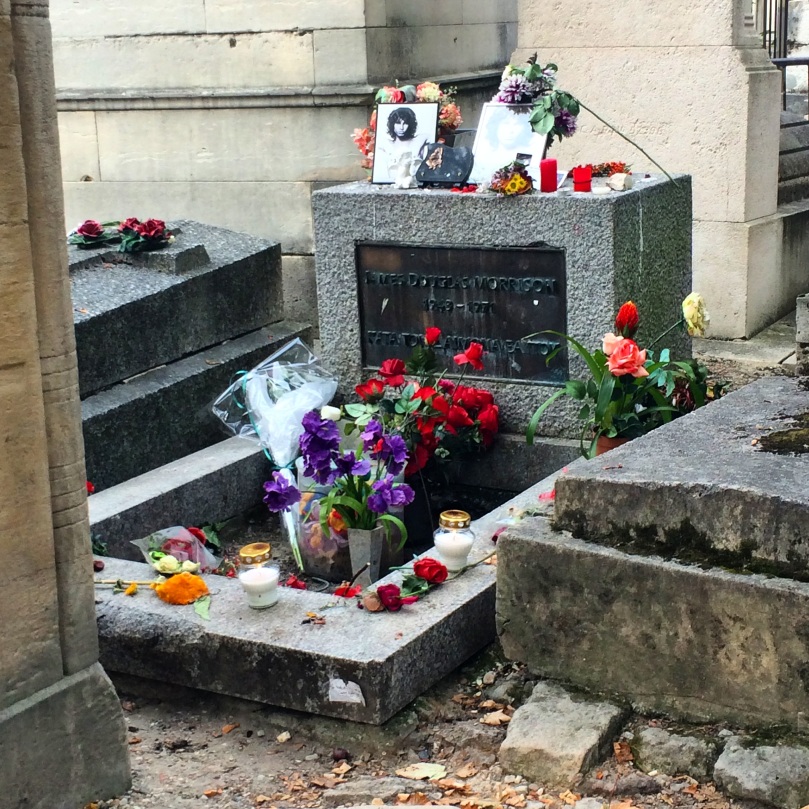 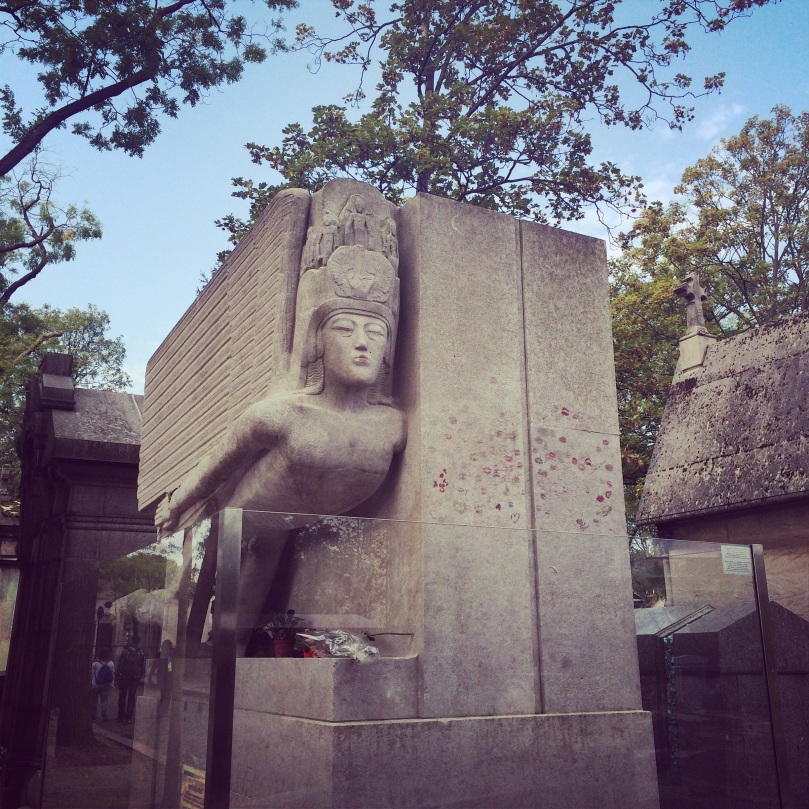 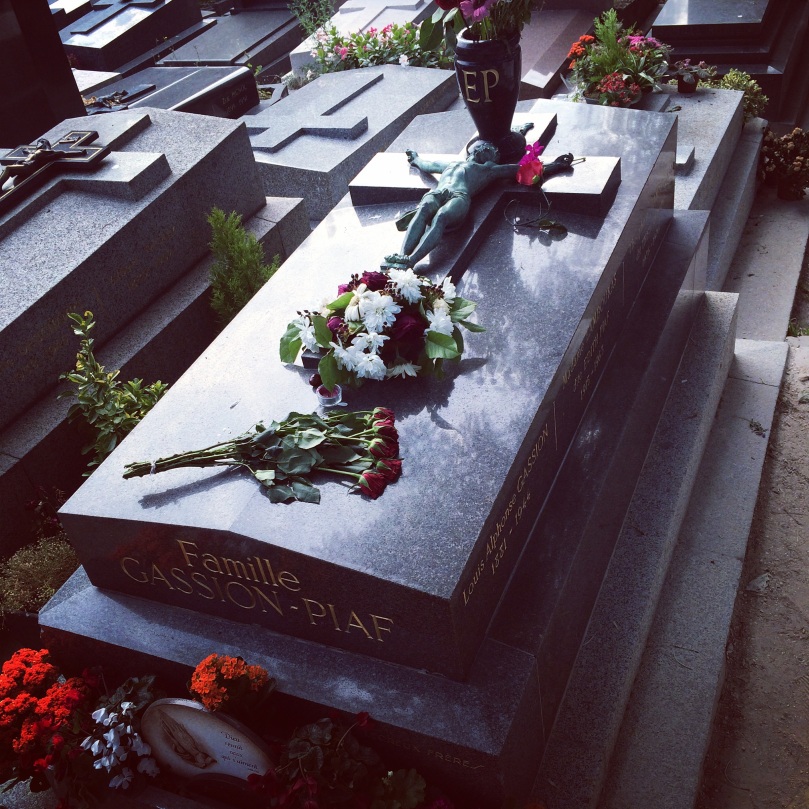 As soon as we saw the Château we were blown away.  And the closer we got, the more amazing it looked.  All that gold and just how big everything is.  It’s truly stunning!  Our Rick Steves book came in handy as we walked through all the rooms because he provided a good history of Louis XIV’s reign and life at Versailles.

I took a French Revolution class in college so I probably should’ve already known a lot about “The Sun King,” but apparently that class went in one ear and out the other, because everything we read seemed new to me.  And so so interesting!  Guys, he was king for 72 years!!!  I didn’t even know people lived that long back then.  He outlived his eldest son, eldest grandson and eldest great-grandson.  What?! 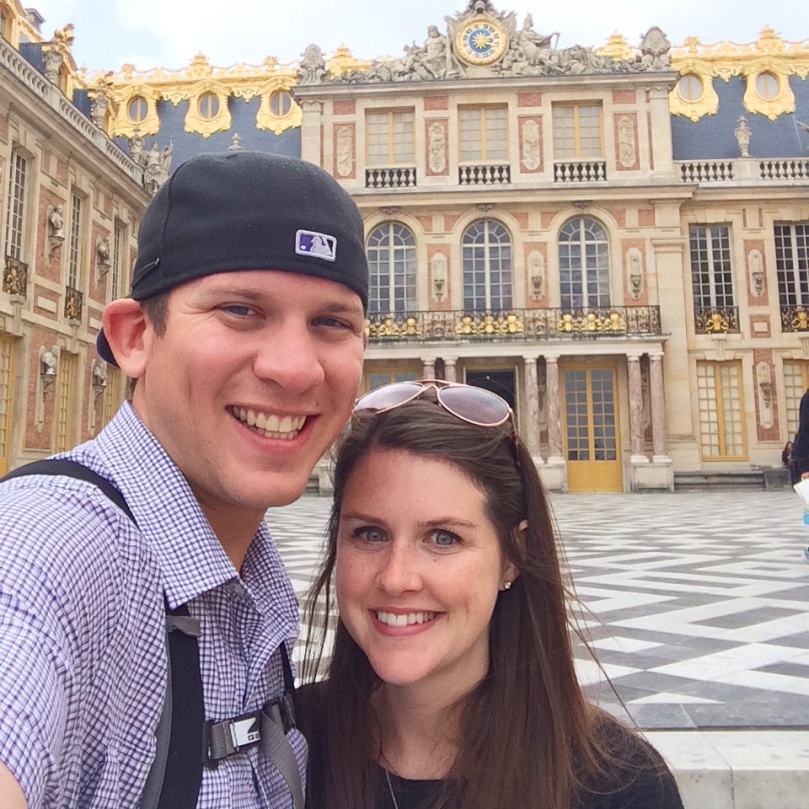 The grandiosity of Versailles (the room, the grounds, the gardens, oh my!) plus all the interesting facts about Louis XIV made for a pretty mind blowing experience.  It was kind of hard to wrap our heads around the fact that we were inside the actual palace he lived in.  P.S. The Hall of Mirrors was my favorite thing ever. 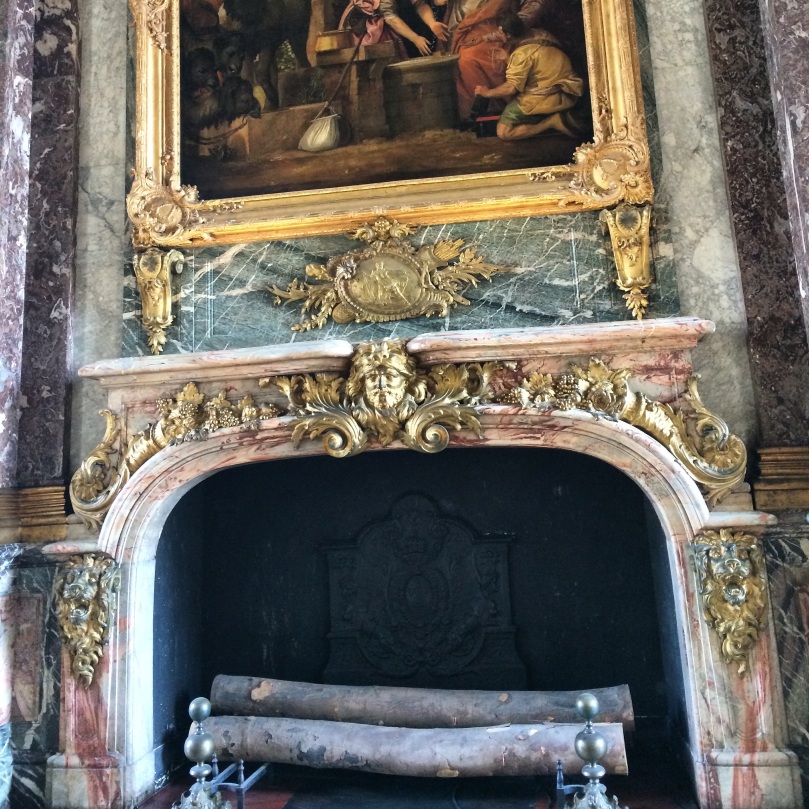 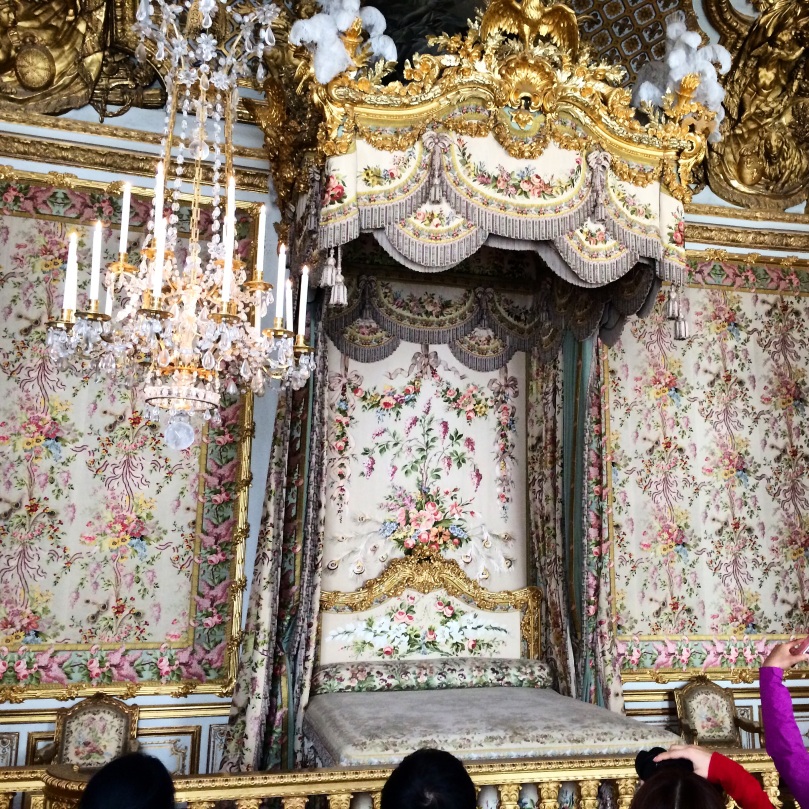 Oh and before we went inside, I made Joey take a picture of me in my wide-brimmed hat, then I promptly stuffed that thing in the trash.  It was windy, cloudy and it only cost me $7.  Not worth it.  Rest in peace, hat.  I barely knew ye. 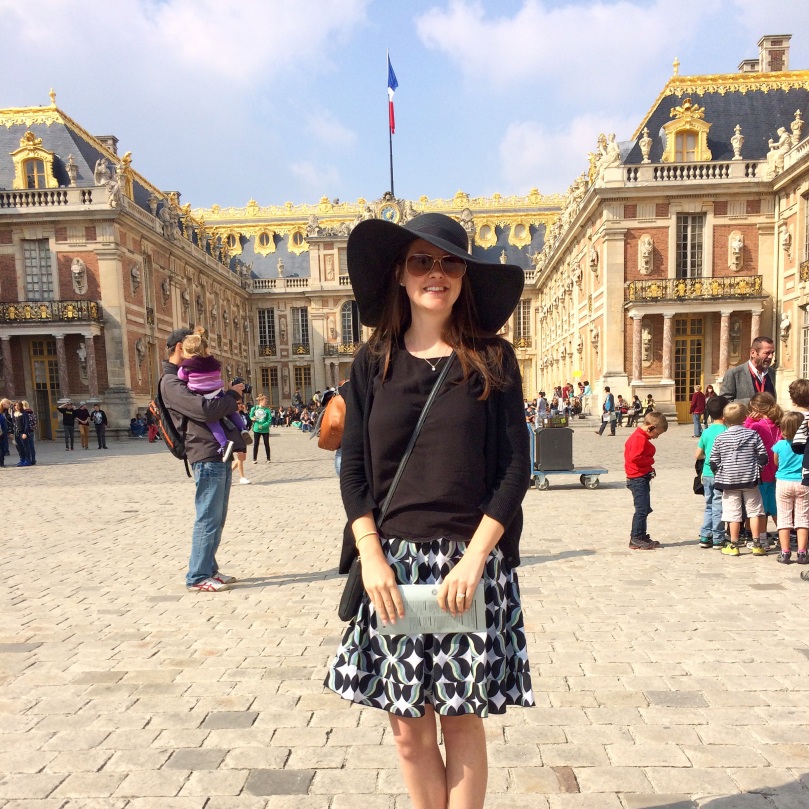 After making our way through the main palace, the surrounding gardens, the king’s summer home and Marie Antoinette’s house (so big, so much walking), we caught the train back into Paris. 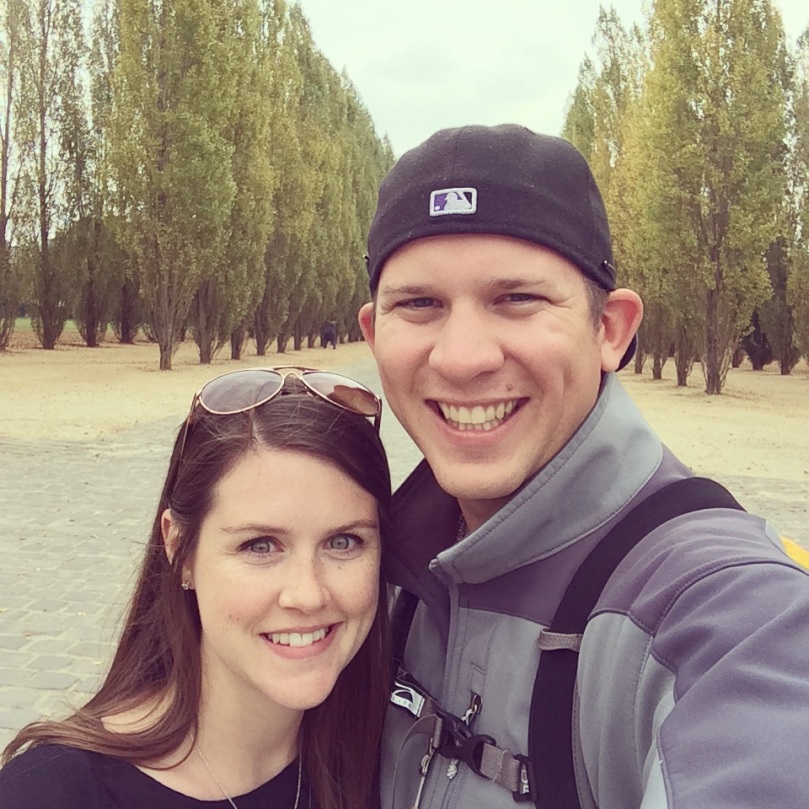 We realized it was our very last dinner is Paris and we needed to go out with a bang so after some train research (and maybe a short nap…) I found Les Papilles.  The only problem, it was a small place where you had to have a reservation.  Oops!  We decided to show up right when they opened at 7 PM to try and grab a table.  We had to wait 20 minutes to see if there was a no show, but we ended up being one of two lucky couples to grab a table without a reservation.  Thank you Gods of Honeymoon Luck!  And you guys, the dinner we got was amazing!  Definitely the best meal we had in Paris. 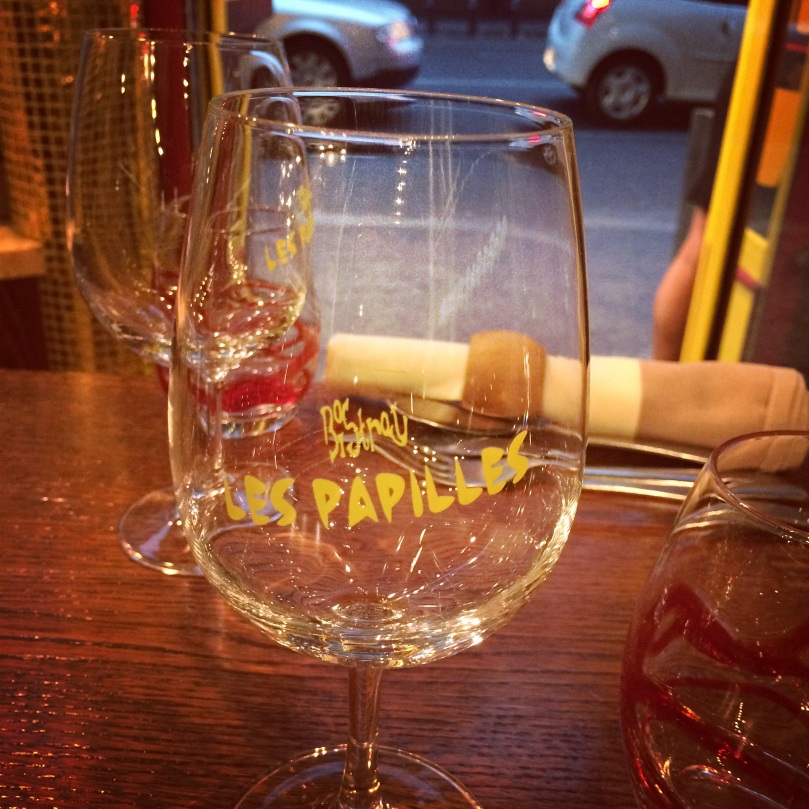 It was a pre-determined 4-course meal and I had to hold back the drool as the restaurant owner went through and described all the courses.  First up, a bottle of red wine and some carrot soup.  We were particularly excited that the soup came out in a giant serving bowl that we got to ladle over our individually-garnished bowls.  Bacon, little cubes of bread, shaved carrot, herbs galore and a dollop of sour cream.  Can soup always be served like this, please? 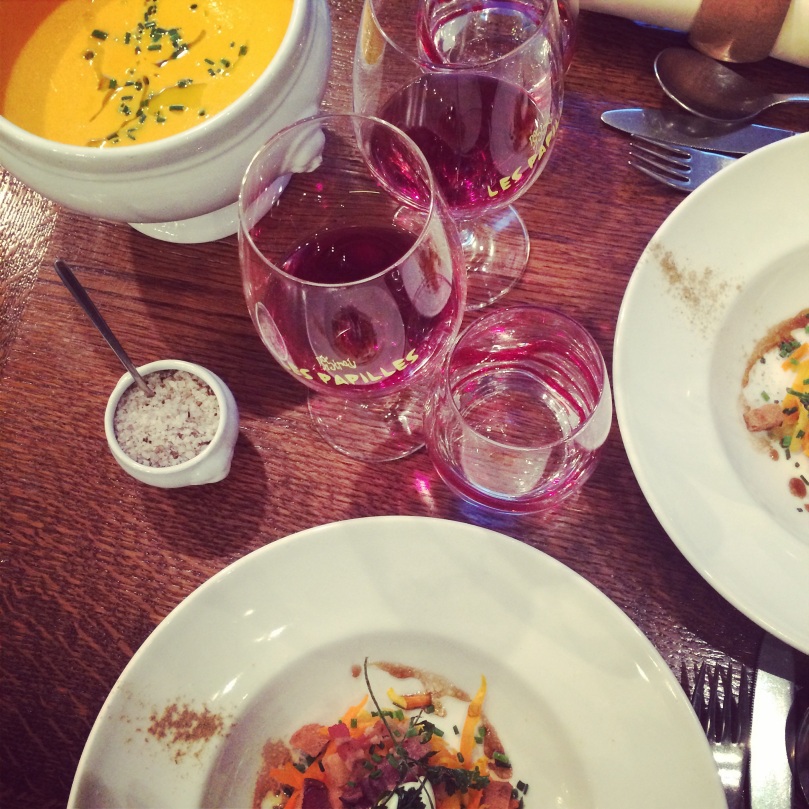 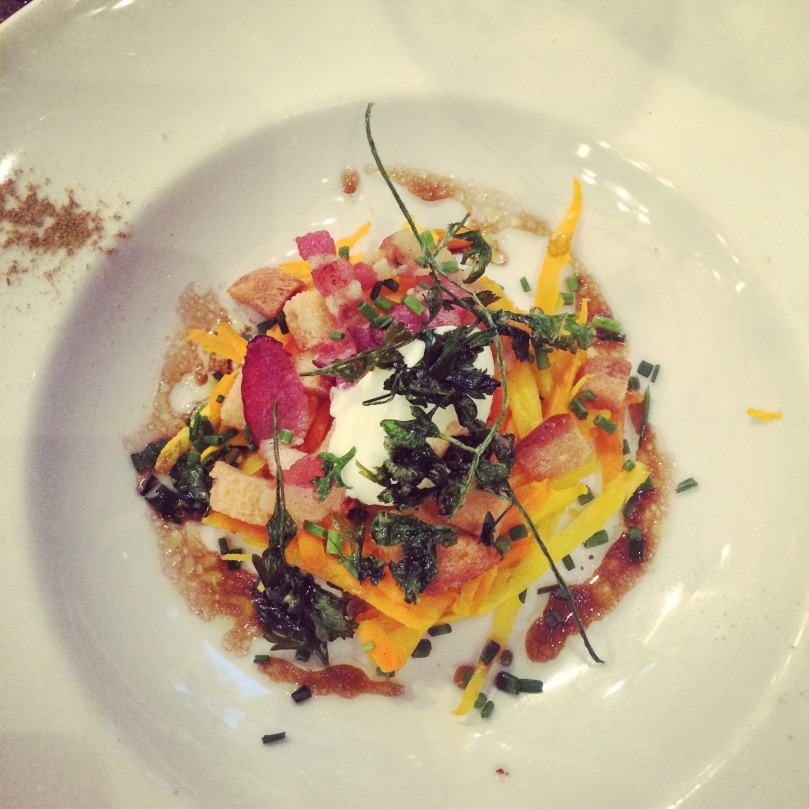 Next up, a copper pot full of crispy chicken, veggies, buttery roasted garlic and penne, all swimming in the prettiest pastel pesto.  Alliteration for the win!  Turns out penne is actually hard to fish out of a pot with a fork, but it was worth the trouble.  Maybe we should’ve just eaten it straight from the pot?

Oh look, a cheese course!  Here’s proof that the French take their cheese seriously.  That’s a chunk of brie, just for me, to eat by itself (and maybe a little bit of balsamic caramelized onions) with a fork.  Can we bring this tradition to America, please?  Those onions were to die for, btw.

And finally, dessert.  Because we hadn’t eaten enough.  Panna Cotta with a caramel foam on top.  I always think desserts with “foam” sound stupid and pretentious but that caramel foam was so dang good that I just can’t knock it.  And Joey’s eyes when he tasted that caramel?  It can only be described as pure joy. 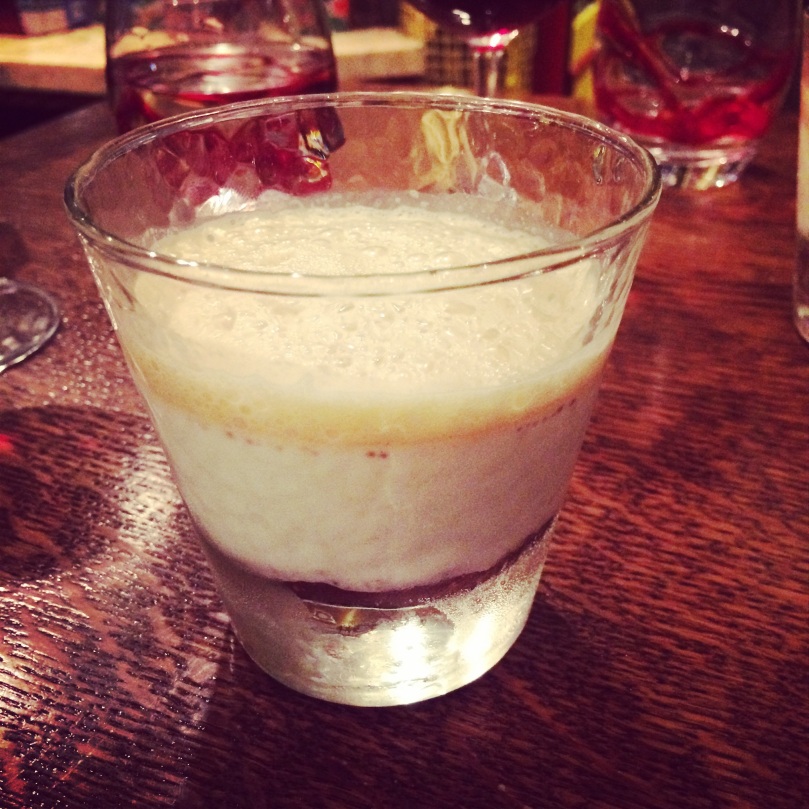 After dinner, we hustled back to our hotel.  *It is not recommended to eat so much food and then walk so fast…*  But we had to make it back in time to borrow (with the definite intention of returning!) a blanket from our hotel room and meet our French tour guide!  We took good old Rick Steves’ recommendation and booked a car tour that took us past all the important Parisian sites so we could see them all lit up at night.

Let’s skip over that part where I spent much too long trying to help our tour guide (a charming Frenchman who took us around in his personal car) pronounce my name.  I now go by Doren… or something.  Anyway, though there was a small language barrier, we were able to understand names of places and follow where our guide was pointing.

Though we both agreed that the tour maybe would’ve been more informative towards the beginning of our stay in Paris (by the last night, we had seen most of the big sights), it was still a whole new experience to see everything lit up at night.  Driving in the traffic circle around the Arc de Triomphe was simultaneously exciting and terrifying and seeing the opera, Sacre Coeur and Moulin Rouge were particularly amazing because we hadn’t seen them before. 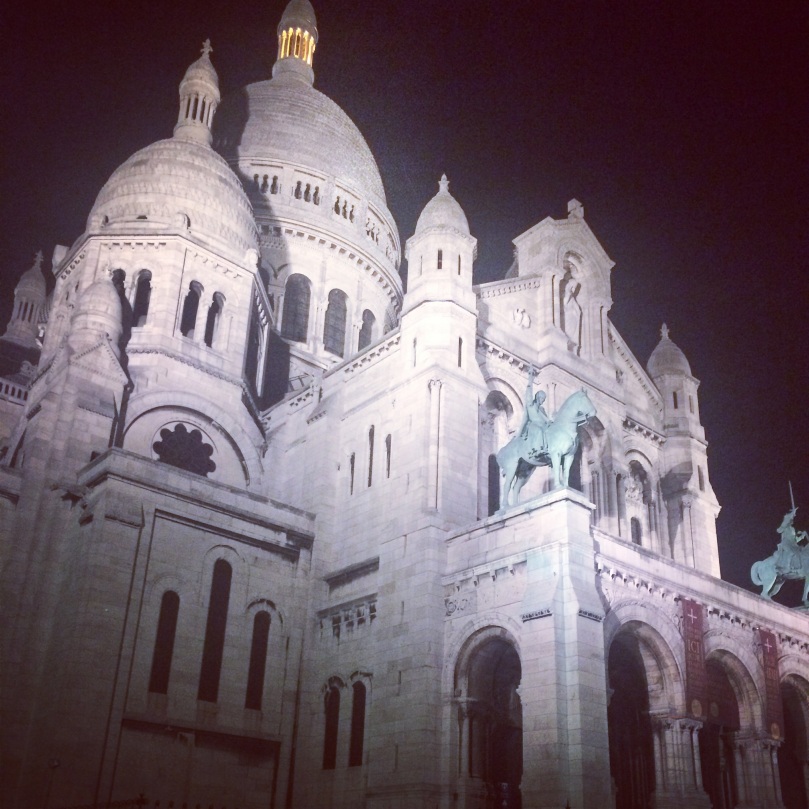 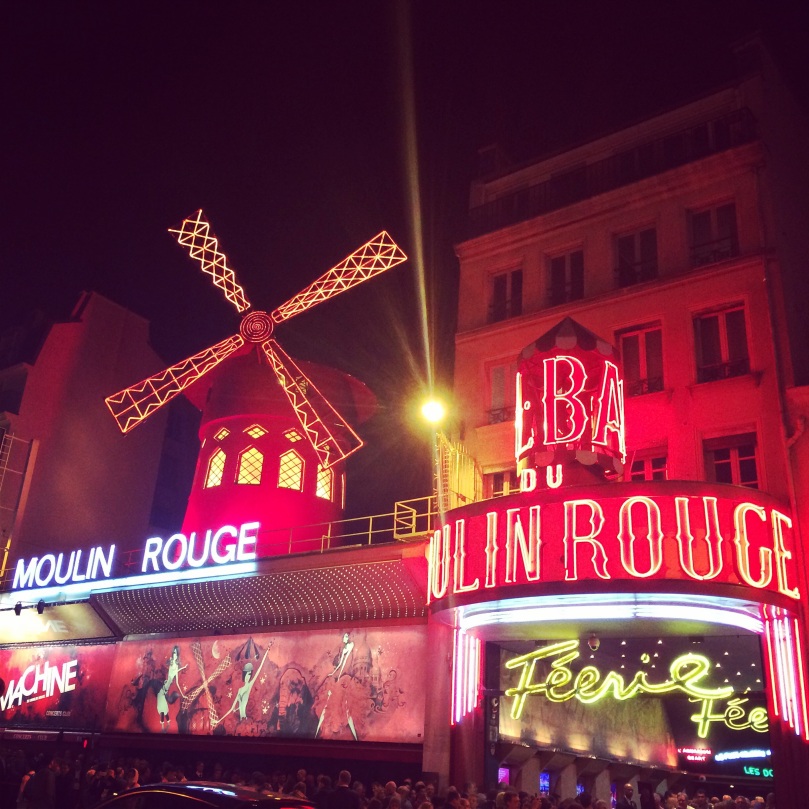 But the best of all… by far… was the Eiffel Tower.  We parked right in front (or was it behind?) the tower and words cannot describe how beautiful it was.  And then just when I thought I’d seen the most wonderful thing in the world, the clock struck 10 and those lights started to TWINKLE.  This is going to scream Stereotypical Sensitive Female, but I got teary-eyed.  And as much as I wanna blame that show of emotion on the bottle of wine at dinner or the bottle of champagne we opened in front of the tower, it probably had more to do with the fact that I was in Paris, on my honeymoon, with my best friend, staring at the most romantic site I’d ever seen.

P.S. Those lights only twinkle for 10 minutes.  I’m so thankful that our tour guide got us there at the perfect time. 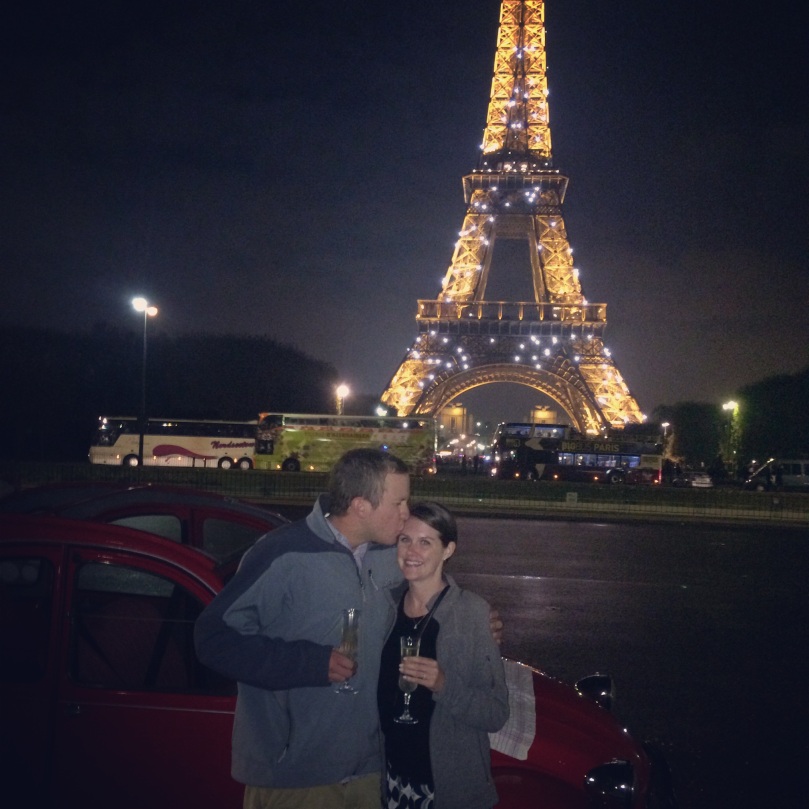 And that was Paris.  In the end, I think a conversation I had with my cousin last month sums it up best.  She took a trip there a few years ago and was explaining that she’s been places that she had built up so much in her mind that she was disappointed when she finally went to them, but Paris was everything she’d imagined.  I couldn’t agree more.  Except I might say Paris was even better than I had imagined.