I’m back!  If anything, this series is making me really aware of how many good things we cook.  When you’re doing the post-work marathon of going to the gym, cooking dinner, eating dinner, cleaning up dinner and fitting in Season 5 of GoT before Season 6 starts (we made it, phew!), you don’t exactly have time to really appreciate how good what you cooked for dinner (hopefully) is.  Even if it’s just the same vegan mac and cheese you’ve made like 100x, take a minute to appreciate how glorious it is! 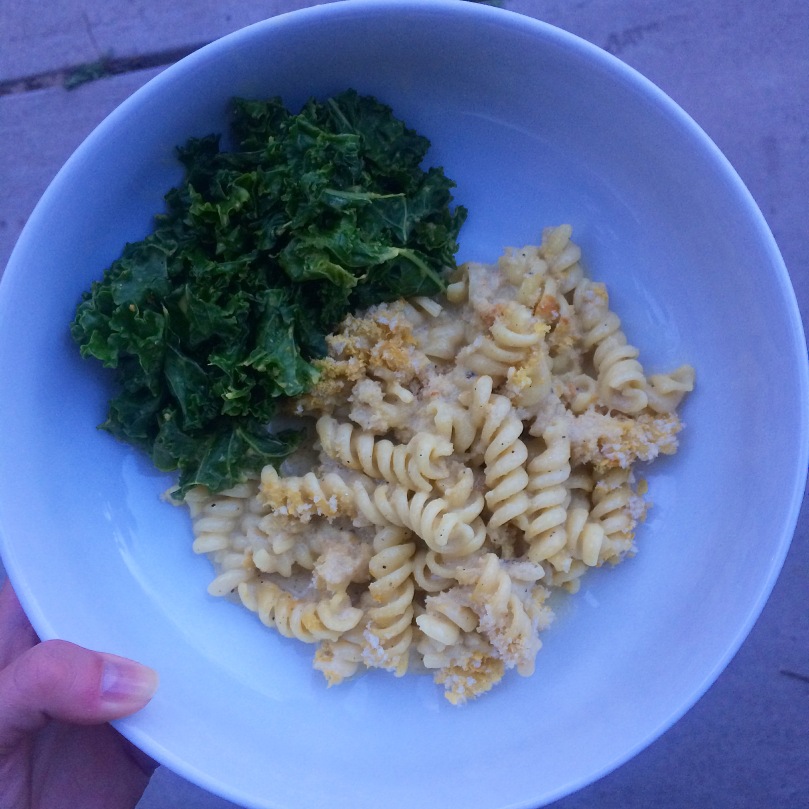 I forgot how good this recipe was until Joey suggested we make it this week, but it is really really good.  And if you like saucy mac and cheese, this one is for you!

I was admittedly and wholeheartedly obsessed with this recipe last summer.  Like made it once a week and was embarrassed to admit to Joey that I had put it on our meal plan AGAIN obsessed.  Good thing he was totally okay with it because it’s LOADED with his favorite ingredient: nutritional yeast.  Yeah, we’ve been over this.  If you roast the garlic ahead of time, this meal takes all of 20 minutes to make.  And look, I know VEGAN mac and CHEESE is an oxymoron, but vegan or not, I would (and maybe have…) spoon this sauce directly into my mouth because it is so flavorful and cheese-like.  I mean Grandma’s mac and cheese is still #1, but this comes right after.

Colorado isn’t exactly known for its seafood, but turns out, if you get good crab from Slidell, Louisiana (I got it at Whole Foods, but my aunt lives there!), you can make the most incredible crab cakes.

Okay, even though we ate these during Game of Thrones and I should have been completely distracted and not even realized I was eating, these were too good to ever ignore.  There was very little “filler” ingredients so these mostly tasted like crab, which IMHO, is EXACTLY what crab cakes should taste like! That herby sauce on top was the perfect compliment, but let’s be real, the actual crab cakes were the star of the show.  I can’t take any cooking credit on these, but Joey made it seem effortless and food cooked by other people always tastes the best.

Joey asked me to make banana bread a few months back and look, there’s like a million different banana bread recipes on the internet but this vegan version was the PERFECT combo of sweet banana, bold vanilla flavor and occasional bites of walnut.

I am so bad at freezer food.  So so bad.  I know the freezer is a great place to store food for when you just don’t feel like cooking and can pull out a container of red beans and rice and that sounds so great, IN THEORY, but in reality, defrosting something for dinner never sounds exciting to me.  Because my dinner life is either A) cooking something fresh or B) going out to eat.  Ain’t nothing in between (except the occasional pizza delivery).  But, the exception to this rule is frozen baked goods.  This is where chocolate chips cookies, the best sandwich rolls and banana bread muffins live.  They love it in there!  This particular banana bread freezes BEAUTIFULLY and I’ve been pulling out a few at a time to defrost in the fridge and be devoured as snacks.

Happy Eating and Weekend-ing to you all!  I’m super excited because I’m headed to New Orleans!!!  My mom is already there and Joey and I haven’t been there together since October 2013, so my heart is probably going to explode from happiness.  New Orleans is a place to say yes to everything and I plan on doing just that!