Hi!  What if I watched four movies, two TV show episodes, six football games and one award show this weekend?  Is that too many things?  Is that why I barely read this weekend?  Don’t worry, I still fit in a (the last??) bike ride to the farmers’ market, a facial, dinner with my sis and Sunday chores, but I sure do feel like I watched a lot of things this weekend! 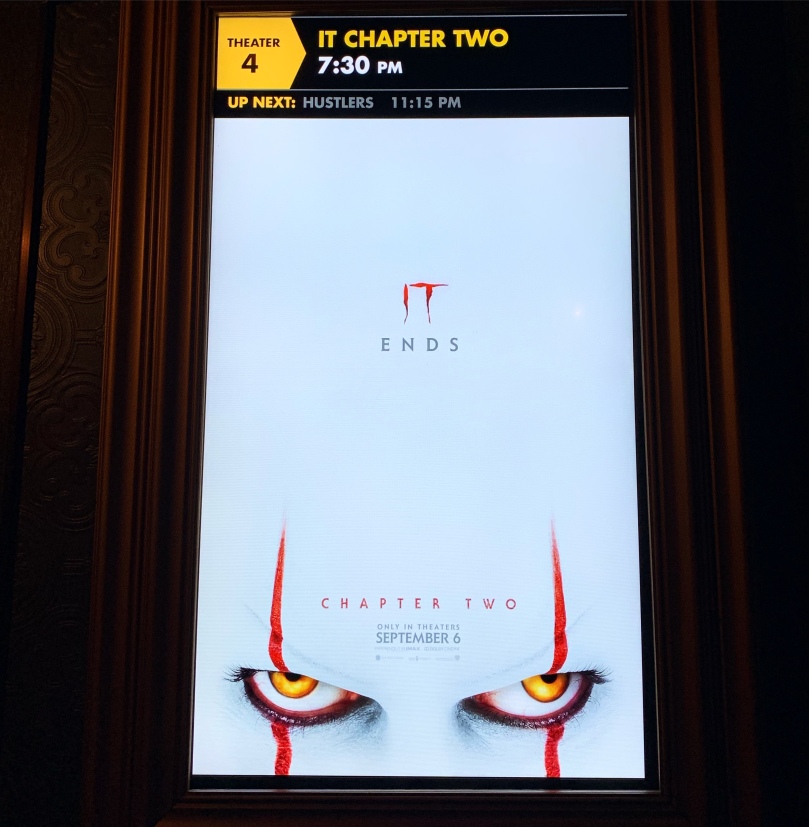 Joey really really wanted to see It Chapter 2 and was considering going by himself when I decided I could take one for the team and see it with him.  I am NOT a scary movie person but I fully committed by watching the first one BY MYSELF on Thursday night so we could see the second part together on Friday.  I’m not going to lie, I did not love the first one and the second one felt SO LONG, SO REPETITIVE, SO NOT SCARY.  But, sitting in a packed theater for a horror film was actually a very fun experience!  Mostly, Stephen King just seems really hard to adapt and I’m not sure why we keep doing it, but give me Bill Hader and I’ll sit through anything!

Saturday started with coffee and whole wheat pancakes for two, which were a lovely reminder that buttermilk is the best.  Afterward, we biked to the farmers’ market and there was that unmistakable fall chill in the air!  Felt kind of nice.  This may have been our last trip to the Union Station Farmers’ Market so I snagged peaches one last time and tried not to feel too sad.  The rest of the day included a trip to the grocery, lunch and a facial for me, but then we had evening plans with my sister and Wayne.

First, dinner at Chook.  It’s just rotisserie chicken and side dishes but it’s somehow much more!  After, we saw Ad Astra, which I’ll be honest, I was not very excited for.  The trailer made it look like the same old stoic astronaut with daddy issues plot.  I was hoping to be pleasantry surprised and… I was not.  To be fair, it is GORGEOUSLY shot — the color palette, the galactic scenery, Brad Pitt’s face — but god, I was bored.  I can’t even imagine all the trouble they went through to make a film in a futuristic version of outer space but with nothing new to say.  I hope to have my mind changed but for now, meh.

We relaxed Sunday morning — did anyone else watch Between Two Ferns: The Movie??  I thought some parts were very funny and some parts were very dumb, but Paul Rudd is a national treasure! — then we went over to our friend Josh’s parents’ house to watch football.  Their house is STUNNING and I ate a bowl of the best pozole, but watching football basically amounts to me just not speaking for three hours.  Joey wouldn’t even let me bring a book 😛

Back at home, we watched an episode of Deadwood, took a picture of a pup’s nose then made lunch salads with Lars and the Real Girl on in the background and man do I love that movie.  We had eggplant pizzas and the Emmys for dinner.  Tonally, that telecast felt very weird and I did not need that hard to hear commentary by Thomas Lennon.  There is just so much to watch on TV that I feel more and more disconnected from the Emmys every year because there’s so much I haven’t seen!  That being said, I really loved the wins/speeches by Alex Borstein and Michelle Williams plus that look on Gwendolyn Christie’s face when the crowd cheered for her was INCREDIBLE.  Also, I reserve the right to feel outraged by the Julia Louis-Dreyfus snub until I watch Fleabag, okay??

Please tell me how your weekend was and… Happy First Day of Fall!