So, it’s that time of year again.

December.  Full-on Christmas season.  Which means Christmas lights, Christmas shopping, Christmas music (except that I’ve been listening to that for the past 3 weeks…) and Christmas feasting.  Oh and December also means the KBCO Studio C release!

I’m sorry if you’ve been reading my blog for the past 3 years, and have to keep reading posts about me waiting in line at 6 AM for some CD, drinking Starbucks and dressed like it’s below freezing outside, but this year will be no different.  Except that it was about 50 degrees and I was overdressed.

But like always, my mom ended up going even though she claimed she wasn’t, we took pictures of us waiting in line and sent them to my uncle (who pointed out that I was overdressed) and reminisced about all the other years that we’ve waited in line.

Warm enough for iced drinks, apparently.  I think I prefer warm weather to having to wait outside in the dark while it rains or just full on snows.  And by “I think” I mean I know.

I’m guessing next year we will reminisce about 2012, the year someone drove up and asked why we were all waiting in front of a liquor store (the line ends up winding there) and one of the radio show hosts answered that “the people of Boulder just want their liquor!”

And I will reminisce about how ecstatic I was that they were passing out bagels and cream cheese because I’ve had a serious bagel craving for the past couple of weeks.  And just for the record, that bagel was everything I hoped it would be.

You know, I used to go because there’s a 2 CD per person limit and my mom needed me to be able to get more than 2 CDs, then I went because it was a tradition, and now I go because I want a copy of the CD.  It’s unplugged, it’s not the crap on the pop radio stations and it’s always so good. 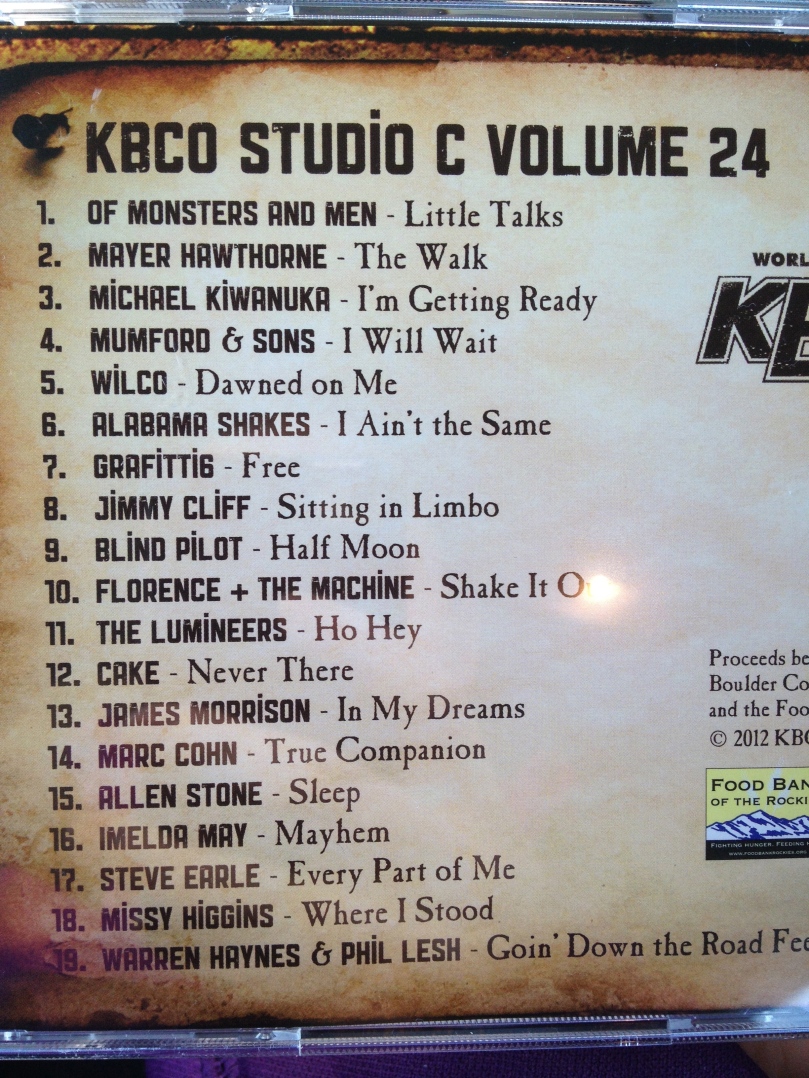 I think Mayer Hawthorne and Grafitti6 are my favorites, but really, I love them all so far.  Oh, and I also go because it’s tradition.  And once something becomes a tradition, I basically insist on doing it for the rest of forever.  So don’t think you’re bailing next year, Mom.

After we got our CDs, we all kind of parted ways and I, in fact, went off to run a race.

This being the only proof that I actually ran the Colder Bolder with my friend Jenn because I wasn’t about to carry my phone during the race.  The joke was on me though when we got beanies in our race packet and had to hold them the entire time we ran.  The race was on CU campus and I love being on campus so I loved the course (except the hills!) and only ran off the race course on accident once…

December also means the Denver Parade of Lights.  Which I thought would mean a quick drive into Denver, picking a prime spot to watch the parade from and easily grabbing a late dinner somewhere on the 16th Street Mall.  Except that it was really nice outside and everyone else also had the same plan, so by the time we’d made it to the parade (40 minutes after it started — hey traffic, you suck) it was so packed that there was no way we’d be getting anywhere close enough to the parade to see it.  And the wait for a table was an hour and a half (no thanks).  And we wandered around through crowded Denver for way too long looking for somewhere to eat that didn’t have a wait that would have us eating after midnight.

Okay, after midnight is a slight exaggeration.  Oddly enough, even though nothing went as planned and it was late and it felt like we had walked all over Denver, I was totally okay with how the night turned out.  I’m usually the one who freaks out if we stray from the plan or if dinner isn’t at a normal hour and for some reason, I was just totally calm.

We eventually happened upon a place with no wait (whoa!) and enough good-looking menu options to make up our minds pretty easily.  I got French Onion soup and a glass of wine and was totally content with life.  That parade probably sucked anyways.

I spent the better part of yesterday at the mall with this person.  This person who has a dog treat fanny pack.  And whom, I told “I can’t be a part of this” to when she put her dog treat fanny pack on.  But we also did some Christmas shopping, lunch eating and boot trying-on.

Since it’s December, I can only assume there will be more Christmas activities, Starbucks holiday drinks, shopping, comfort food and family time.  Yep, it’s that time of year.

How did you ring in December?

Are you done Christmas shopping or are you like me and have barely started?

Does it feel like winter where you live or is it unseasonably warm like it is in Colorado?

3 thoughts on “Weekend Things: This is December”