Every February, Denver rolls out a list of fancy (or not so fancy — I swear Nick-n-Willy’s used to be on the list!) restaurants, offering a set multi-course meal for $52.80 per couple.

Every February, I scroll through this overwhelmingly large list, mostly of restaurants I have never heard of, debate over which menu looks best, which restaurant has the best reviews and which option is going to make me feel like $52.80 is a real steal.  Then there’s the trouble of doing all this as quickly as possible so I can make a reservation before all that’s left is Tuesday at 9:30 PM.

That being said, I have only participated in Denver Restaurant Week a couple of times.  As in twice.  Who am I and how is that even possible?!

This year has been very different.

As soon as the restaurants were posted this year, Joey jumped on it and had us both making a list of our favorite places, we narrowed it down and made a reservation at Vesta Dipping Grill within the hour.  Hence the Saturday at 6 o’clock reservation, bow chica bow bow.

I know it sounds like a fondue restaurant, what with the “dipping” and all, but it’s really just an upscale but hip restaurant that offers an impressive amount of dipping sauces to go alongside your food.  We got there early and grabbed some drinks at the bar and talked about how much we loved the decor and architecture inside the restaurant.  Before our first course came out, we were given “tastes” of some white bean soup and were impressed already. 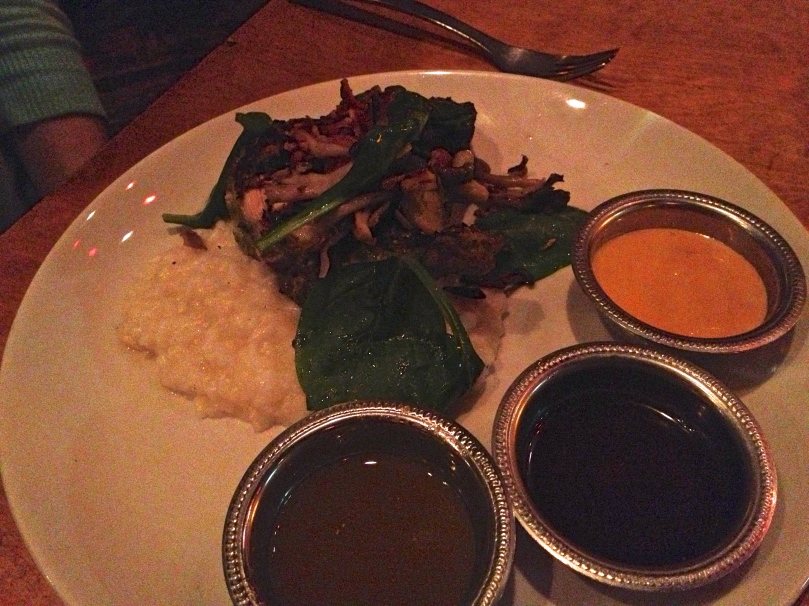 After I devoured my shrimp cocktail appetizer — it had a creole slaw underneath that was spicy and paired so nicely with the shrimp — my main course came out.  “Basil Garlic Grilled Chicken, Parmesan Risotto, Spinach, Roasted Mushrooms, Spicy Bacon Vinaigrette — dipping sauces: red pepper rica rouille, serrano hot sauce, pineapple pedy marmalade.”  Seriously fancy, guys.  The red pepper sauce was my favorite with the chicken and the risotto was out of this world.  But the real winner, was Joey’s dish.

I have always been a huge fan of steak (don’t even ask why I ordered the chicken instead) and this one was probably the best one I’ve ever tasted.  I don’t even know how many times I said, “Can I just have one more bite of your steak?”  And for someone who doesn’t really like potatoes, these were some of the best I’ve tried.  Everything was just so flavorful and well prepared.

I will say the one drawback was dessert.  Joey got this cheeseburger-looking whoopie pie and it was good but not amazing and we felt like everything on the plate was a little disconnected.  I ordered “House Made Goats Milk Ricotta and Manchego, Port-Fig Jam, Toasted Brioche” and am pretty sure it was toast with jam and cheese.  Maybe I’m just too traditional when it comes to dessert, but I just wanted a slice of chocolate cake or something.  Luckily, I was bursting at the seams from all the other courses and was kind of glad I wasn’t in love with my dessert.

Overall, I really liked Vesta and would definitely go again.  Oh and I just saw that they do a Monday Supper for $52.80 and I see Bourbon Chocolate Cake on the menu.  My prayers have been answered.

Next up: Elway’s!  Hannah and I booked our dinner here on Monday night and we were both really impressed.  Leave it to John Elway to put his restaurant inside the Ritz-Carlton in downtown Denver, with complimentary valet, a coat check inside the restaurant and a $41 appetizer tower.  Oh, and cocktail/wine lists on an iPad.  Seriously.

Being the huge Broncos fan that she is, Hannah got this awesome orange and blue cocktail.  I stuck with wine and wondered what would happen if I accidentally spilled my water on the iPad.  We both also got salads for our first course.  And then it was on to the meat!

I got the prime sirloin with broccoli and although this plate looks kind of plain, I assure you they both tasted amazing.  I don’t know if you can tell, but my steak was so thick!  It was kind of a pain to cut but the taste was worth it.  You know a steak is good when I don’t even ask the waiter to bring me some horseradish.  I’ve had a deep love for the stuff ever since I was little and I lovingly blame my mom. 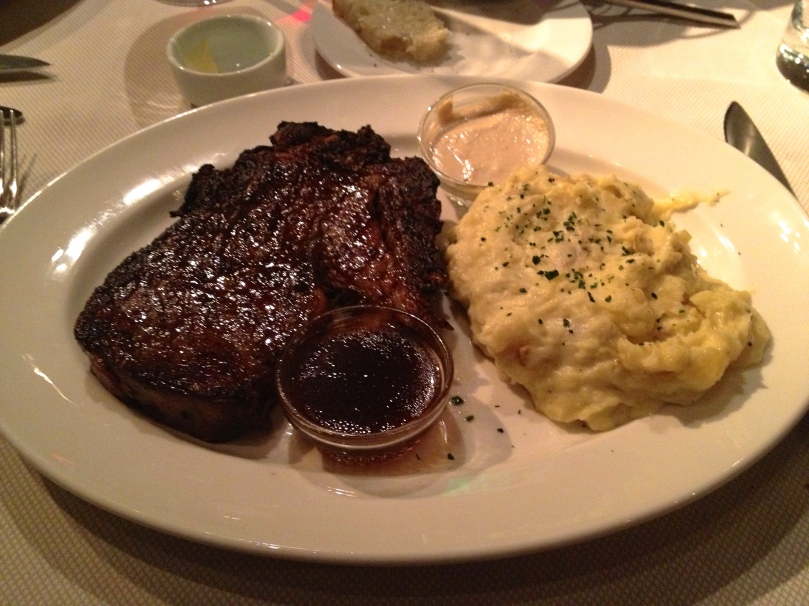 Hannah went with the prime rib, we traded bites and hers was also really good.  Looking back at this picture, I’m seriously wondering why I did not try any of those mashed potatoes.  How good do those look?!  Then dessert came out. 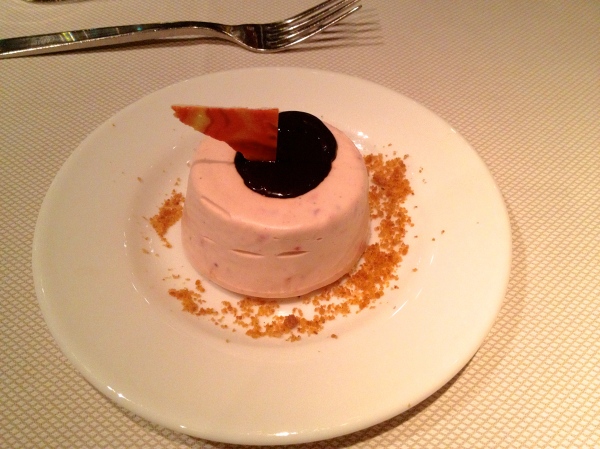 Could this mini strawberry cheesecake be any cuter?  It was unlike any cheesecake either of us had ever tasted.  Almost like it was part cheesecake, part ice cream.  Such a delight after a not-so-satisfactory dessert experience at Vesta.  Plus it was the perfect one person portion.

Then we picked Hannah’s car back up from valet and decided we were going to live the high class lifestyle some day.  Yes, please!

Do you have a restaurant week where you live?

What’s the fanciest restaurant you’ve ever been to?