Months ago, Joey discovered that his beloved Dashboard Confessional was no more, but that lead singer Chris Carrabba had started a new band called Twin Forks and lo and behold, they were coming to Denver with Augustana.  When he asked me to go with him, I was less than excited — despite being a huge Augustana fan in earlier years and actually having already seen them in concert twice — but he seemed so darn enthusiastic about it that I just couldn’t say no.

Flash forward to this week, when Wednesday night’s concert was looming (ugh a weeknight concert, really?) and on a scale of one to absolutely dreading it, I was close to an eight.  The Bluebird was the only one of the three concert venues on Colfax (<— longest commercial street in the USA!) that I hadn’t been to, so I wasn’t sure what to expect but I figured it wouldn’t include comfy seats and free booze.

But!  As it turns out!  The Bluebird is amazing — small, intimate, with plenty of standing room and perfect acoustics — and I maybe even liked it better than the Ogden and definitely better than the Fillmore.  Sorry Fillmore!  I’ve never stood so close to the stage without feeling crammed and uncomfortable and it made for a really cool atmosphere and lots of artist to audience interaction.  I loved it!

And as for the bands… just incredible.  For as much as I can’t stand Joey singing Dashboard, I thought Twin Forks was really good.  Actually, I thought Chris Carrabba was really good.  At singing, at talking to the audience and at humoring his fans.  Case in point, halfway through the set, someone yelled “play some Dashboard!” to which he responded, without hesitation, “okay!” and immediately launched into a beautiful acoustic version of…uhhh…some Dashboard song that Joey belted along to directly in my ear.  I thought it was so awesome that despite being in a pretty popular (I guess…) band previously, Chris didn’t have any of that “I’ve made it” pretentiousness.  Also, he walked RIGHT in front of me twice and I think, at 5′-3″, I was taller than him. 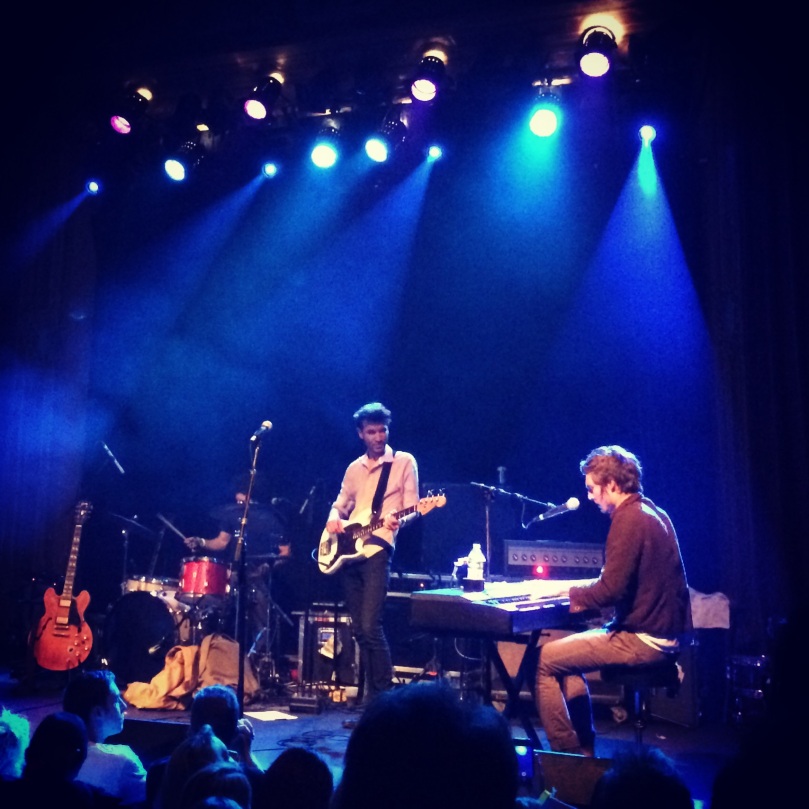 Hmm, where to start on Augustana.  I guess I could start by mentioning that lead singer Dan Layus set up his own equipment.  Have you ever seen a lead singer do that?  I sure haven’t.  And I actually didn’t even notice it was him until he’d been up there for 10 minutes because no one in the audience made a big deal of it.  I thought the whole situation was incredibly cool.  As if that hadn’t already made a good impression on me, the whole band then came out and Dan started singing in the world’s coolest raspy- yet-clear-and-powerful-all-at-the-same-time voice.  And my ears died and went to heaven.  They did a set of both older and newer — their about-to-be-released-album sounds great! — then came back out for an encore of “whatever we wanted.”  Crowd requests should be a thing at every concert, amiright?

Favorite Moment: When he sang “Sunday Best” and tried to slip the name of the city he was performing in into the lyrics, but accidentally called us Salt Lake City — which is where they were the night before — and was horribly embarrassed and apologetic and adorable and perfect.

In a day and age where I’m constantly disappointed by award shows full popular artists who can’t actually sing like they do on the radio or talent competitions full of 16-year olds who just lack experience, it is so so refreshing to hear someone who can hit all those notes they hit on their albums and doesn’t shy away from anything.  And who seems so genuinely grateful for their fans.  So I guess what I’m really saying is that sometimes things turn out better than what you expected and having your expectations succeeded never gets old.

Oh, and this happened after the concert.  For the record, a donut — even when it’s covered in Froot Loops — is still just a donut.

3 thoughts on “Twins Forks & Augustana at the Bluebird”