In case I haven’t mentioned it enough, Joey is a huge TV watcher and for years, he’s been burning through entire series of shows.  I tend to think the ones he picks are… um, questionable — MacGyver?  The Andy Griffith Show?  24? — but occasionally he’ll pick one that I don’t mind sitting in on a few episodes of.  Or, in the case of Freaks and Geeks, one that I don’t mind joining him to watch in its entirety.

This weekend, we finished watching the one and only season that the show made it through and while it’s been off the air for almost 15 years and maybe isn’t the most relevant thing for me to be talking about (though it’s gained popularity in more recent years), I still wanted to give my two cents.  If you know nothing about the show, the gist of it is two groups of high schoolers — freaks and geeks — and the two main characters/siblings — Lindsay and Sam — who belong to those groups respectively.  It’s the 80’s, it’s dorky dads, it’s high school relationships, it’s reputations and it’s James Franco.  Enough said.

I wasn’t hanging on the end of every episode and it wasn’t my favorite show ever, but now that we’re through all 18 one-hour episodes, I’m sad it’s over.  It’s amazing to me that they were able to go into such depth with all the characters in just one season.  They seemed like real people with real emotions and real problems.  In the end, I felt like I really knew every main character (and there were a lot of them!), from their hobbies and passions to their home life and everything in between.  And storylines were always followed up on.  No small feat, if you ask me.

I’ve spent a lot of time wondering what Season 2 might’ve been (especially with the way Season 1 ended!), but maybe it’s better off having ended with one good season.  It obviously didn’t hurt any careers (cough James Franco, Seth Rogen, Jason Segal) and makes for a quick TV-show binge.

Favorite Character:  Lindsay — I know, how boring, but to me, she was the most relatable and endearing character.  But I also really loved Bill (3 episodes in, he turns out to be hilarious!), Nick (is Jason Segal ever not lovable?) and Mr. Weir.

Favorite Line: “You know, there was a girl in our school, she had premarital sex. You know what she did on graduation day? Died! Of an overdose. Heroin.”

On Wednesday, I texted Joey saying my weekend cravings were warm weather, sleep, an everything bagel and a fun post-rental showroom lunch.  Check on everything but the bagel — maybe I’ll treat myself to one sometime during the week — so, in other words, it was a very good weekend.  I think the weather had a lot to do with it (sunshine makes me happy!), but I was just in such a good mood all weekend long.

Our neighbors have three cats that roam around outside and like to come keep us company when we sit out there.  Joey’s allergic, so I think this is the closest I’ll ever get to owning a cat and I’m soaking up every second.  This guy’s name is Big Chuck and this is apparently how he likes to sleep. 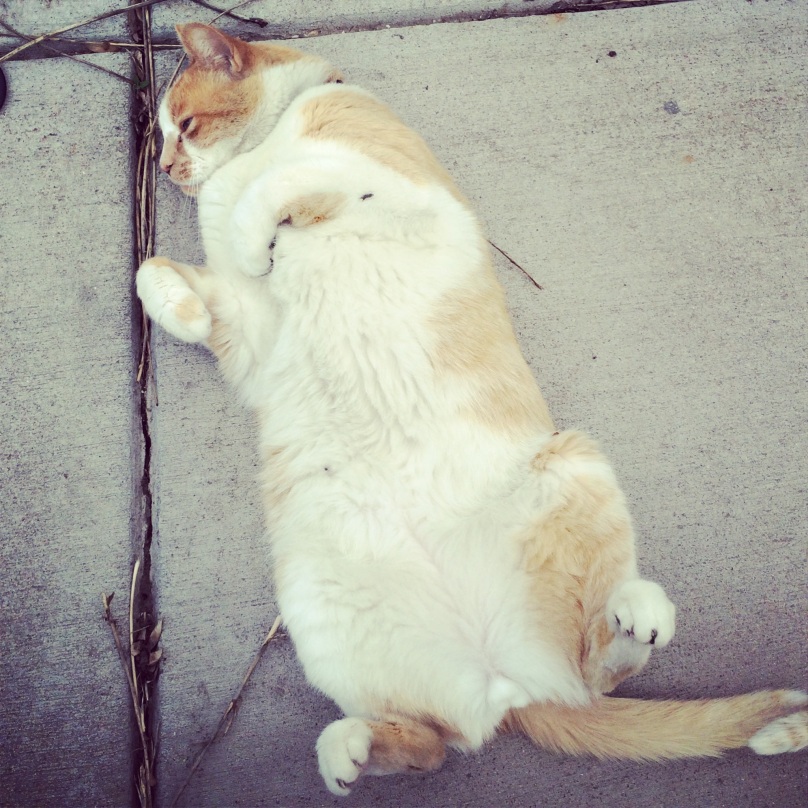 For whatever reason, Saturday was just a perfect-feeling day.  We were up and at ’em for a trip to our wedding rental company’s showroom so we could check out what they had to offer, plus it was warm enough to don a skirt and spend a majority of the day outside.  Meaning I ate every meal outside, walked everywhere I could, took a nap in our hammock (!!) and ignored anything that “needed” to be taken care of inside. 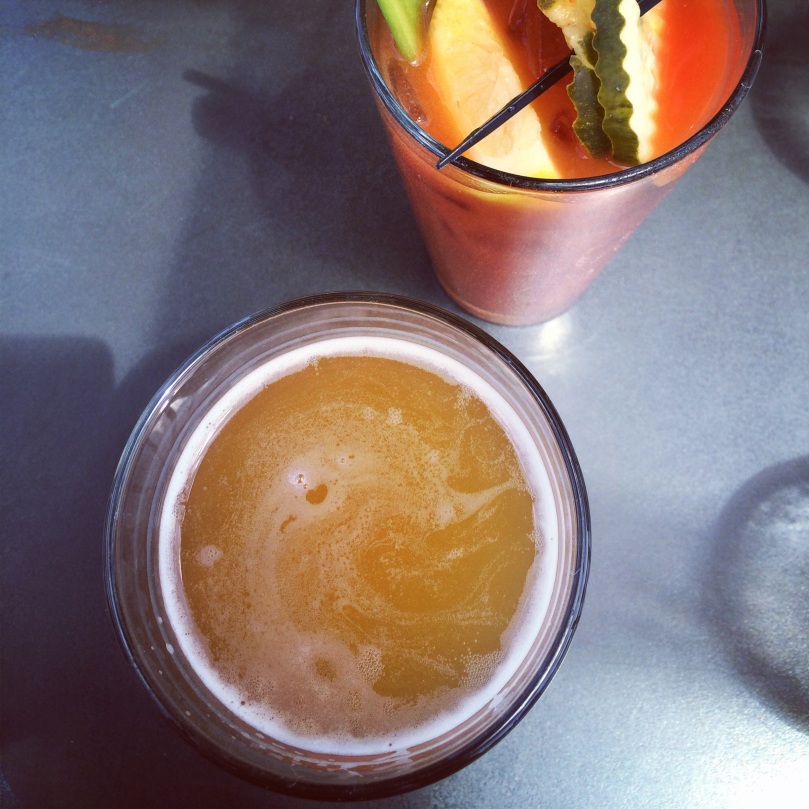 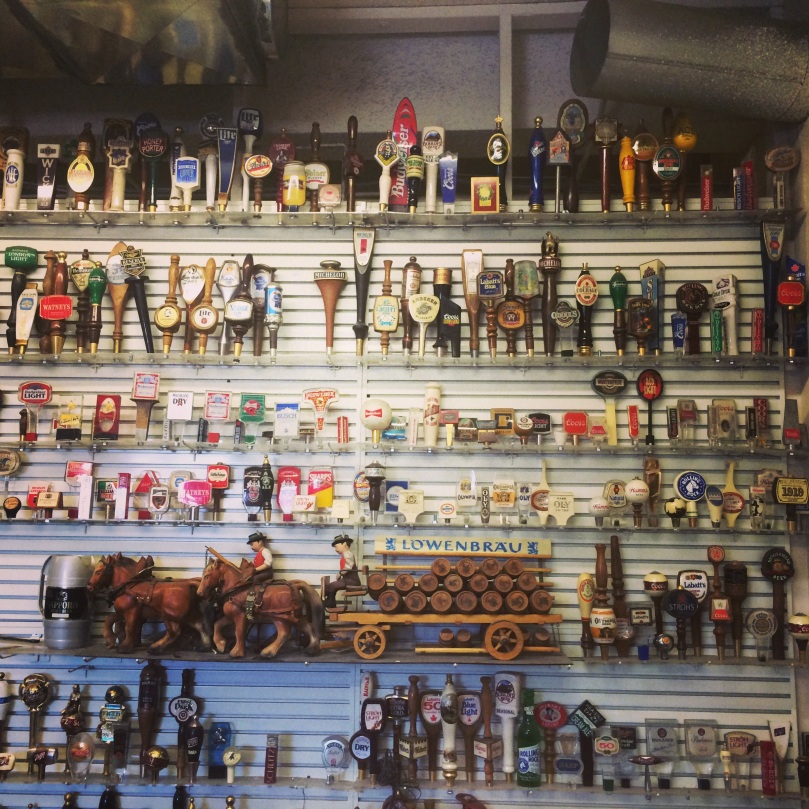 Thank goodness I soaked up all the warm sunshiny goodness on Saturday because Sunday was cloudy, rainy and chilly (stop teasing me, spring!).  But that just meant it was a good day for breakfast and a massage with mom.  I requested the HCJr. station, which meant a lot of Sinatra and Etta James.  I love that old music because you don’t have to wonder if that’s auto-tune or talent.

Afterwards, beer kegging commenced!  Turns out there’s a place to re-fill CO2 tanks really close to our house so we were able to conveniently do that on Saturday then work on the whole sanitizing, beer-transferring, regulating and force carbonating stuff yesterday.  If all goes well, we’ll have beer ready is a couple days.  And good thing because our fridge is completely beer-free and I’m not sure how long Joey will last. 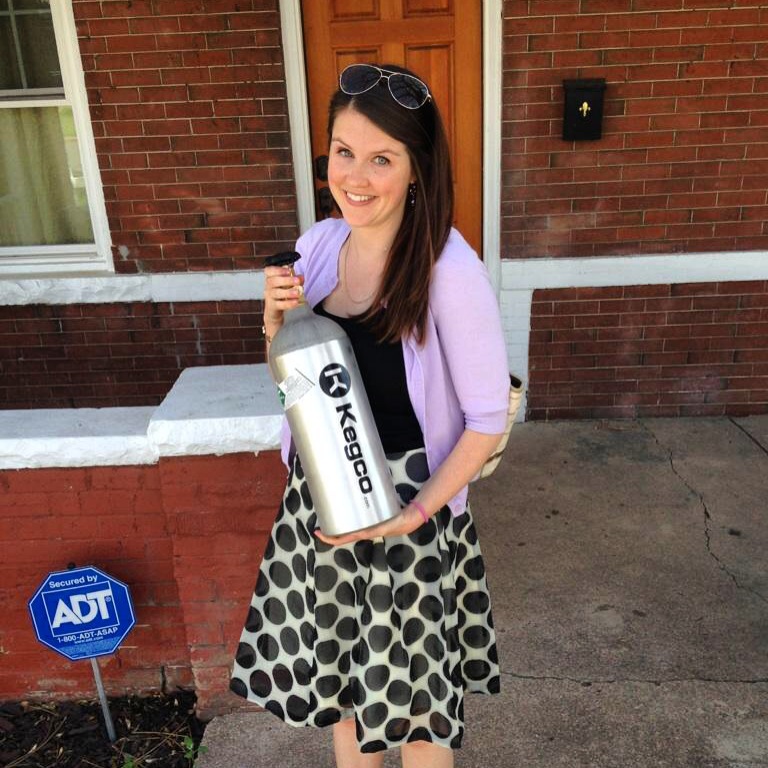 Sunday night dinner, compliments of my sister’s Whole Foods discount and my mom’s neighbor who grows asparagus.  I was hoping a summery dinner would bring about warm weather for this week but instead, it’s going to be in the 50’s till Friday.  What can you do?

P.S. I don’t remember adding “slice finger on blender blade” to my weekend cravings list, but I most definitely did that too.  It’s proving to make a lot of things — like putting my contacts in, getting a good grip on the bathroom doorknob and typing this post! — very difficult.  My finger has a heartbeat.