Well it’s Monday, of the first full work week in over a month, and it has already been a morning!  When your alarm doesn’t go off, the gym is crowded with people “working out” in jeans and you come in to unexpected work news, all you can really do is pull up The 1975 radio station — I KNOW it’s crappy pop music but I can’t help loving it?? — and try to remember that at least your weekend was good. 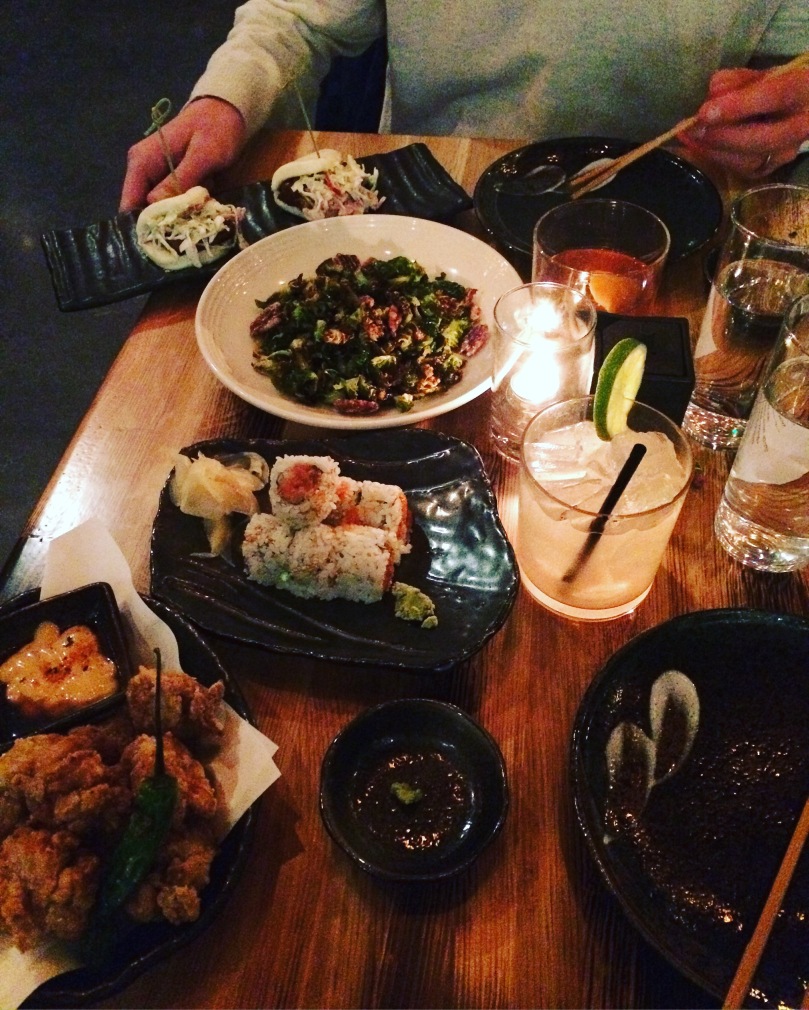 All week, we planned on staying home Friday to watch a movie and make nachos, but then actual Friday rolled around and all I really wanted to do was go out and see a movie.  Sometimes you just gotta go with your gut, right?  We hit up happy hour at the newly-opened Mizu Izakaya and were majorly impressed.

We seriously wanted to order everything on the menu but settled for Brussels sprouts, pork buns, spicy tuna roll, Philly roll, spring roll (all the rolls!) and our personal favorite: chicken kaarage, aka grown-up chicken nuggets that made me confess to Joey that if nutrition wasn’t a real thing, I’d probably just live off of mac & cheese and chicken nuggets.  I wanna go back already! 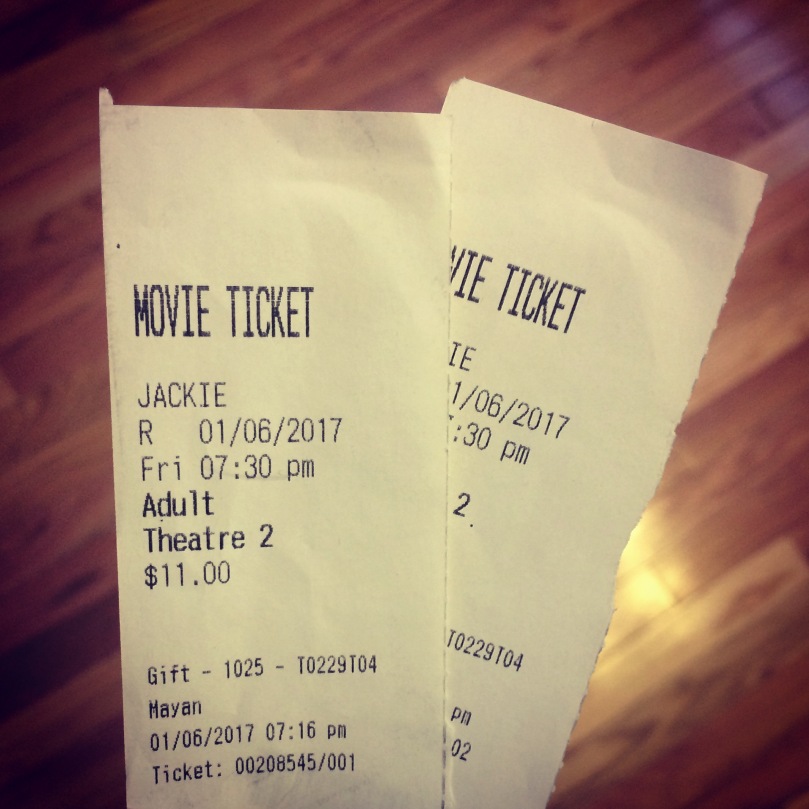 Afterwards, we halfway took down our Christmas tree but actually just made a huge mess that we then had to clean up at 10:30 when we got home, then went to see Jackie.  Get this, we both hated the movie.  I was never not aware that I was just watching Natalie Portman play Jackie Kennedy and guys, this is mean, but she was kind of strange.  That being said, I couldn’t stop thinking how UTTERLY HORRIFYING that experience had to have been.

Also, on a scale of 1-10, how awful of a person am I for laughing when a fellow spectator sprinted down the stairs halfway through the movie and totally ate it? 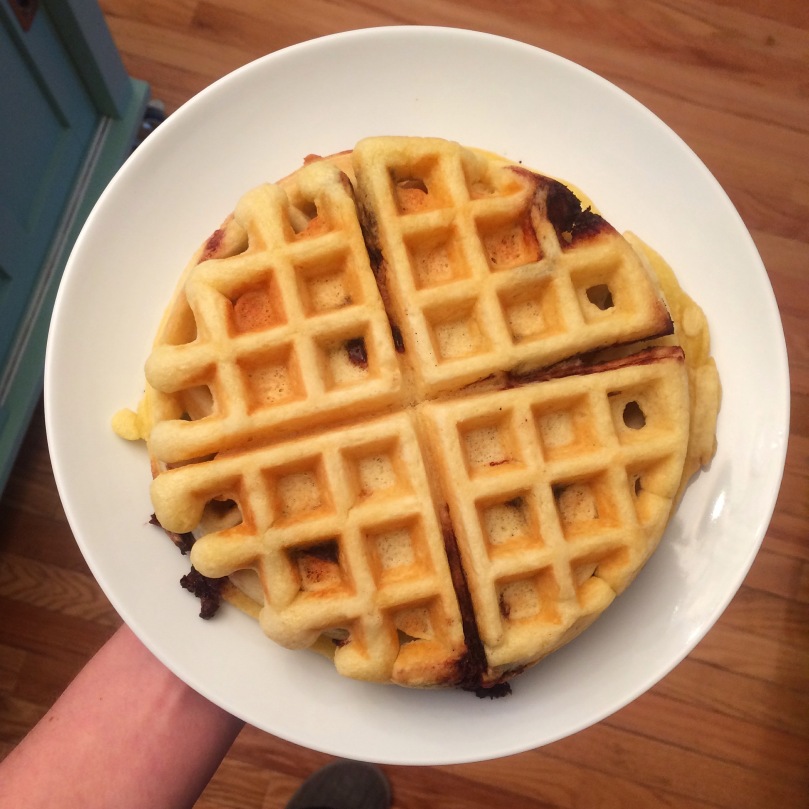 Kinda sorta mentioned waffle wishes for Saturday morning so when I woke up, I found Joey in the kitchen making some!  If that’s not THEE BEST way to wake up, then I don’t know what is.  He basically ordered me back to bed to read while he finished breakfast, so I guess I’m the luckiest girl in the world.  These were buttermilk chocolate chip and tasted incredible.  In all seriousness, cooking breakfast for someone else is one of the best showings of love and I’m so so spoiled and loving every second of it. 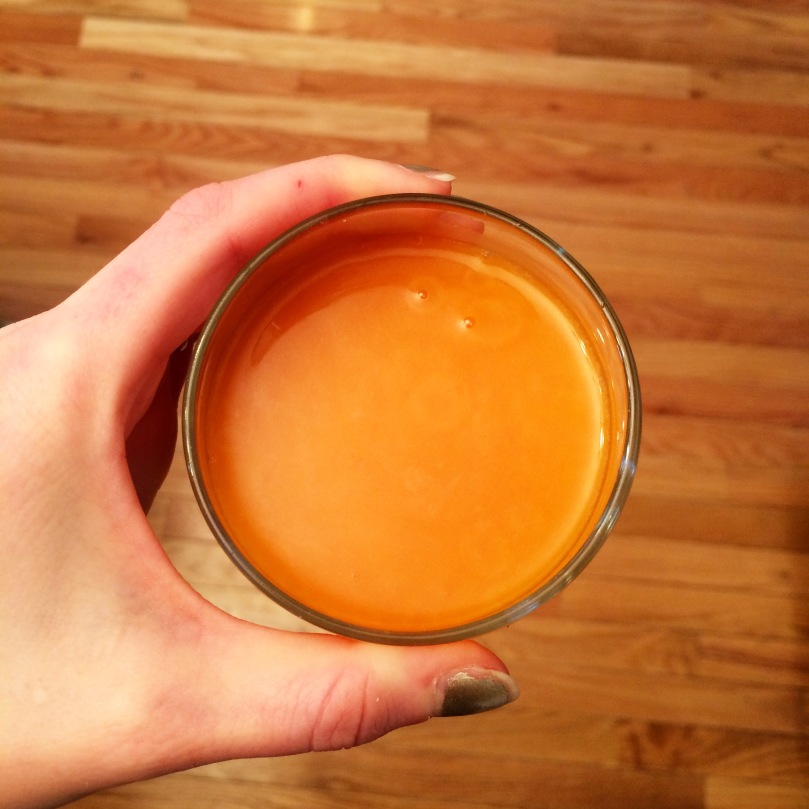 I had a eye exam a little bit later, then hit the gym for a quick run but returned in time for lunch and some kombucha.  As in I bottled a (grape!) batch, brewed up a new batch to ferment and drank the last of last week’s stash, which was Carrot-Ginger-Turmeric and maybe the best I’ve made to date.  Also, let this be a promise to you and to myself, to blog more about this kombucha adventure I’m currently on.  It’s been fun and friends/family seem pretty into it.  Plus, it’s exciting to explain what a SCOBY is to people who’ve never heard of such a thing 🙂 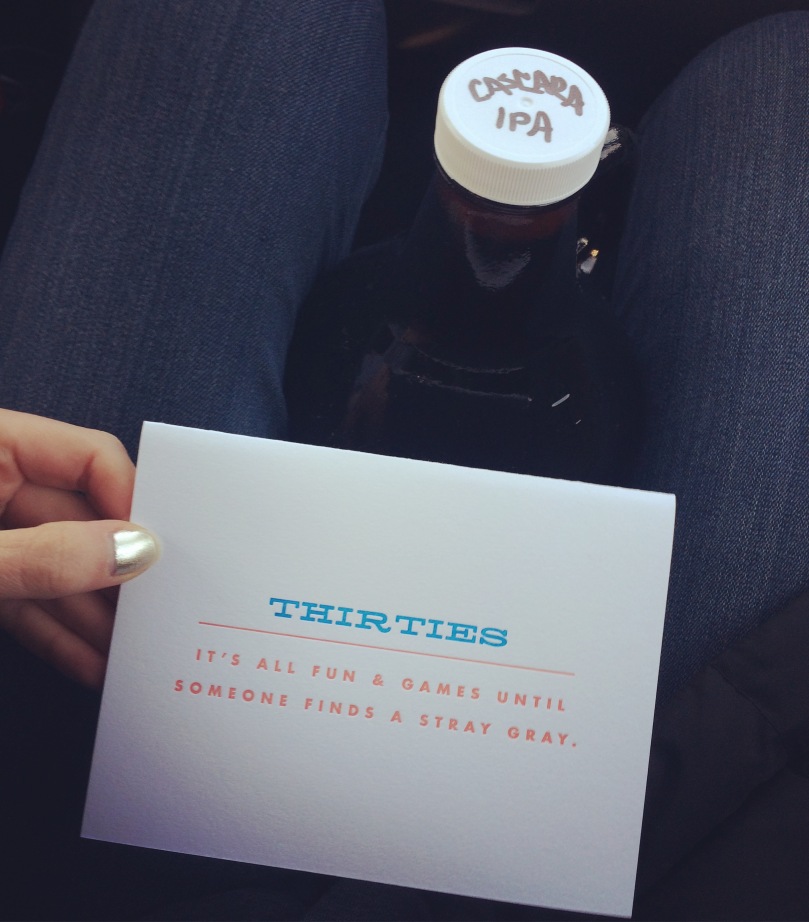 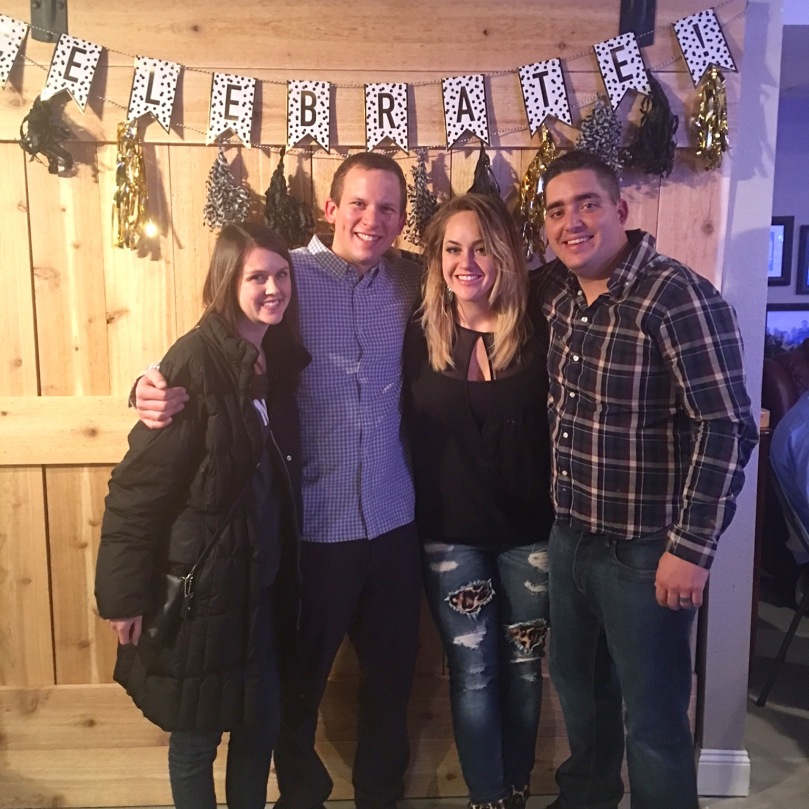 We spent the rest of the afternoon/night at a Surprise 30th Birthday Party for our friends Brock and Ashlee.  I’m the queen of hearing about special beer tappings on Instagram so we real quick picked up a growler of Cascara IPA from Denver Beer Co. before heading over and no joke, it was maybe the best IPA either of us have ever tasted.  The smell was equally incredible!  I signed Joey up for Untappd last week, so we both logged this as a 5 star.  High praise, high praise.

Mainly, I spent the night socializing and Joey spent it winning a basement poker tournament.  Tell me, if I gave him the $5 he needed to buy in, does that mean his winnings actually belong to me??  Also witnessed Brock plaster Ashlee’s face/hair/shirt with a giant handful of birthday cake then immediately made eye contact with Joey across the room to give him a non-verbal warning that if he ever did that to me, he’d live to regret it. 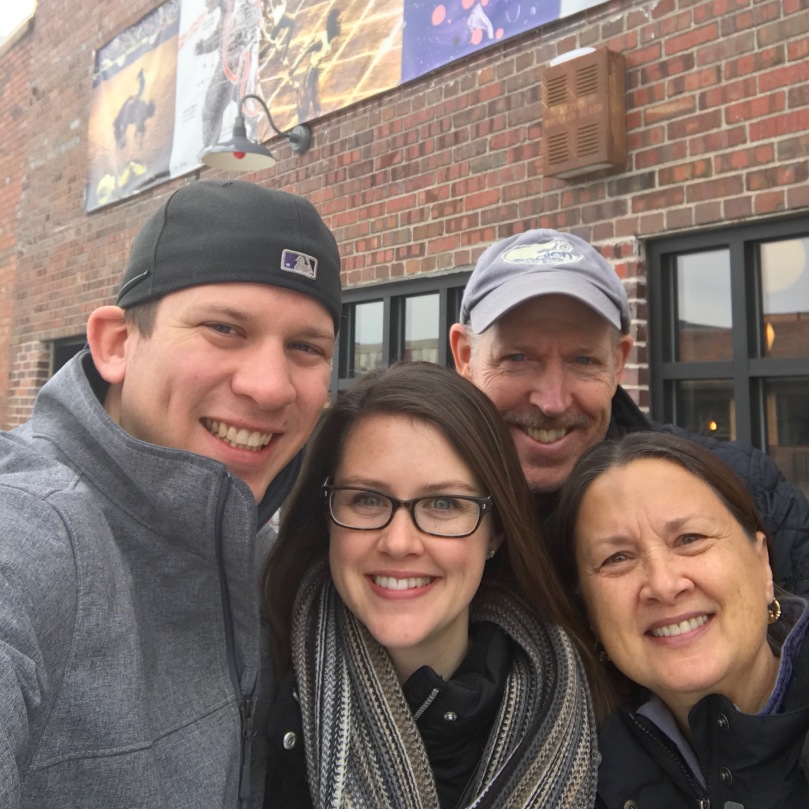 Up early(ish) Sunday morning to take my parents to breakfast for my Dad’s birthday.  I was kind of kidding when I said I wanted to eat that Mushroom + Thyme Tartine for breakfast every day, but not really because we definitely went to Stowaway again and I definitely ordered it again.  So good!  My parents are headed to Arizona later this week and even though it won’t be single digits in Colorado like it was last week, I’m still jealous of the warm weather they’ll get to enjoy.

Post breakfast, I grocery shopped, clothes shopped — why is that when you go specifically to buy new jeans, you end up with everything BUT jeans? — food prepped, then cooked dinner and made it to the couch just in time for the Golden Globes. 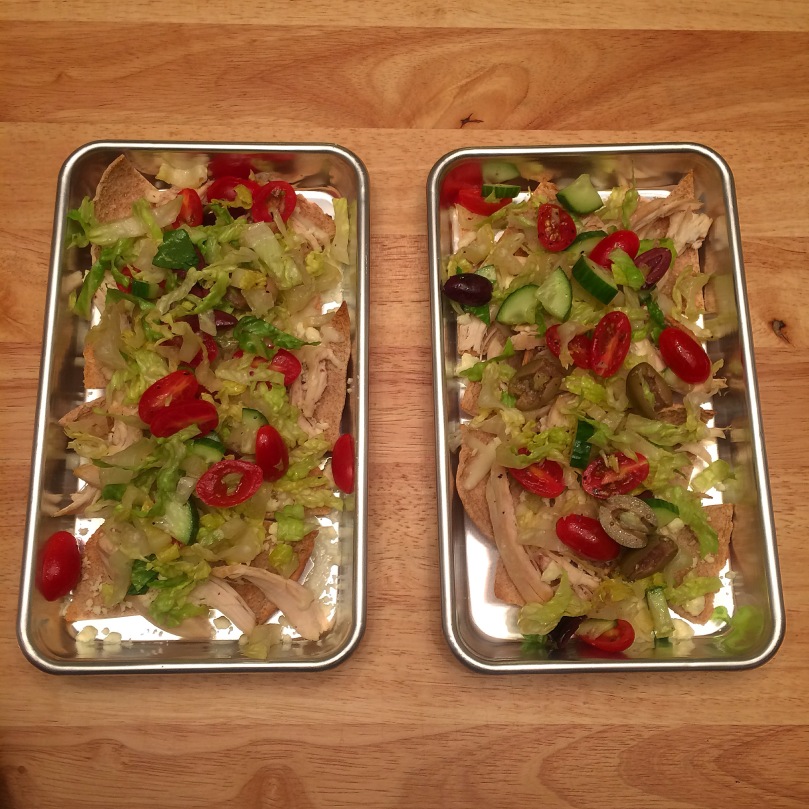 We made these Greek Chicken Nachos from Cooking Light and I was insanely excited about them, but they ended up tasting pretty lack-luster.  Still, the joy of eating nachos off your own half-baking sheet is unmatched.  I thought the Old Globs was sorta meh.  Halfway through, I basically forgot Jimmy Fallon was even hosting until he showed up on stage again.  But, I was happy for all the La La Land recognition and to have Meryl Streep stand up and challenge us all to speak up and hold strong for what we believe in right now.  I totally don’t believe in those nachos, though.

Happy Monday to you all!