Well it did indeed snow last week. I assumed the mountains would get it but we would just see rain and then at 4:30 on Tuesday, I looked up and there it was. I saw it with my own eyes and yet, I could not believe it. Truly the weirdest weather swing I’ve ever witnessed in Colorado, a place known for weird weather swings.

By Friday, the sun was back and it was warm enough to sit outside for lunch so Andi and I were both happy!

I definitely did not have the energy to cook dinner, so we ordered take out from Chop Shop, then drove there to pick it up. Driving to pick up food counts as an exciting outing for me nowadays 😂 We were so hungry by the time we started our 20-minute drive back home, that we maybe ate the entire container of Brussels sprouts we ordered as an appetizer. Then I was too full and only made it through half my bacon-wrapped meatloaf, but oh well! We also watched The Handmaiden, which had not one but two twists that I did not see coming at all. I’m still working out how I felt about it but it sure was interesting!

We picked a semi-ambitious waffle recipe for Saturday morning (anything with multiple components feels ambitious to me, but we better take advantage of free time and make those recipes now, right??) and they were great! At 11, we took both cars over to Presbyterian St. Luke’s hospital to have the car seats inspected and after all the agonizing and readjusting we did, they both passed without issue. They also had us practice putting a doll in the car seat, which I was not expecting to have to do, and yeah, I could use some more practice 😂

Back at home, we put a few finishing touches on the nursery and IT IS OFFICIALLY DONE! I love how it feels in there ❤❤ We took some pictures so we could share with friends/family who can’t come tour it in person and so that I can do a little post about it soon! We also got the hospital bag mostly packed. Just need a few more things in there and we’ll be good to go!

We lounged for a bit afterward and Joey made me watch I Know What You Did Last Summer because I recently mentioned that I hadn’t ever really seen it. He made me promise we’d watch it while it’s “Spooky Season,” so I gave in 😋 It was pretty much what I though it would be, but it’s so hard to watch any of the movies that Scary Movie makes fun of because I just think of all those jokes 😂 Definitely laughed out loud when Jennifer Love Hewitt was yelling “what are you waiting for?!” If you know, you know.

The weather was perfect so we took our pup on a longish walk then I made this summery dinner for us and even though I felt like I’d messed up the millet and the tofu and the sauteed veggies, it all tasted really really good and fresh together. To continue our “Spooky Season” viewing, we added a bunch of Hitchcock films to our queue and then decided to stick with the sea town theme and watch The Birds. I still want to know the reason for all those bird attacks but we liked it! Also, in the middle of the night, the blinds in our window flew up and Joey is convinced birds did it 😂

Joey got up and went on a run Sunday morning, so I ordered us breakfast sandwiches from the Wooden Spoon and it hit the spot! Andi and I took a morning nap afterward, but then I dragged myself upstairs to change out of my pajamas because my parents and sister were stopping by 😊

My mom brought me peach scones (totally ate one while reading outside later on and it was the loveliest moment) and this Celtic mother and baby necklace that I love so so much ❤ It was really nice to visit with them all, especially that part when my dad gave me a back massage 🙌 I told them we are going into strict quarantine mode around 37-38 weeks (because how AWFUL would it be if Joey had a fever when we checked into the hospital and couldn’t be there for the birth of our son?!) and I think my mom is already panicking about not seeing us for three weeks 😋

Not sure why Andi needs to look so scared when I hold him, but here we are at 34 (almost 35) weeks 🎉🎉🎉 I should probably do a third trimester post real soon! Joey grilled us some steak while I made guac and then we put it all together with some cotija for steak tacos. So good!!! The Cowboys game started right after dinner, so I offered to take Andi on a walk and it felt so nice and semi-fallish outside. We took a game break to watch Big Brother and then the Cowboys lost and Joey fake cried over that and the Rockies loss from earlier in the day 😂

Good morning!  How was everyone’s weekend?  Mine was great, because A) fall in Colorado this year seems to be more beautiful than I ever remember it being and B) Denver Rock’n’Roll weekend!

We kicked things off on Friday with a trip to the race expo.  Honestly, I usually love the expo — what’s not to love about free mini Larabars?! — but the turnout was kind of disappointing this year.  Aka no Larabars!  Actually, we barely saw any of the tents we usually see.  Joey had to shush me when, on our way out, I mumbled “Turn back, there’s no Larabar samples!” to those runners just heading into the expo 😛

Afterwards, we booked a weekend trip to Texas — should I regret this decision? — for the Cowboys game and went out to dinner with my family.

Saturday started with some sleep in action (for me at least…) followed by homemade Pumpkin Spice Lattes and pancakes topped with those apples I was talking about.  There’s a coffee shop nearby that makes their own pumpkin spice syrup (with REAL pumpkin!) that we originally planned on going to but my aforementioned sleep in set us back so homemade (still with real pumpkin!) it was.  A bit sweet but otherwise delicious!

We spent the afternoon at a birthday party for Joey’s cousin’s son, complete with TONS of Ninja Turtles loot, a piñata and a homemade pirate cake.  The weather was sooo nice that day so we spent a majority of the party outside in the backyard (I even wore a dress!)  I wasn’t kidding about fall being extra beautiful this year!  Afterwards, we spent some time cleaning up our wedding stuff.  Yeah, we still hadn’t done that… and I’m happy to say our backroom is officially cleared out. 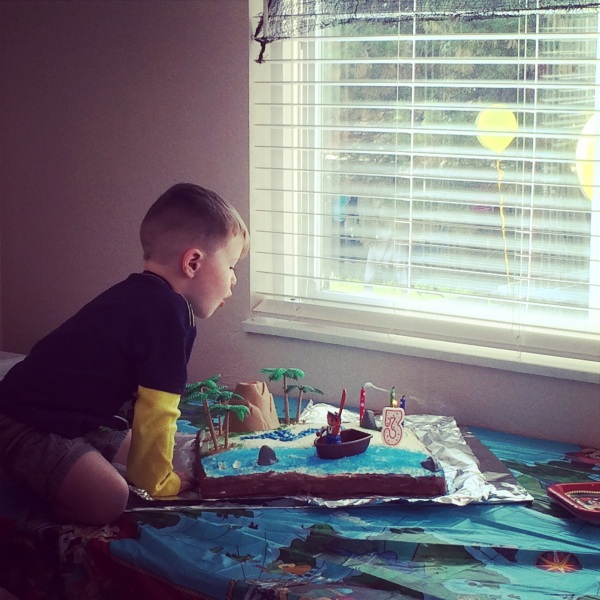 We kept it pretty low key for the rest of the night.  The worst part about running Sunday morning races is it means an EARLY morning and thus an early Saturday night.  But I still deserved a pre-race beer sample, right? 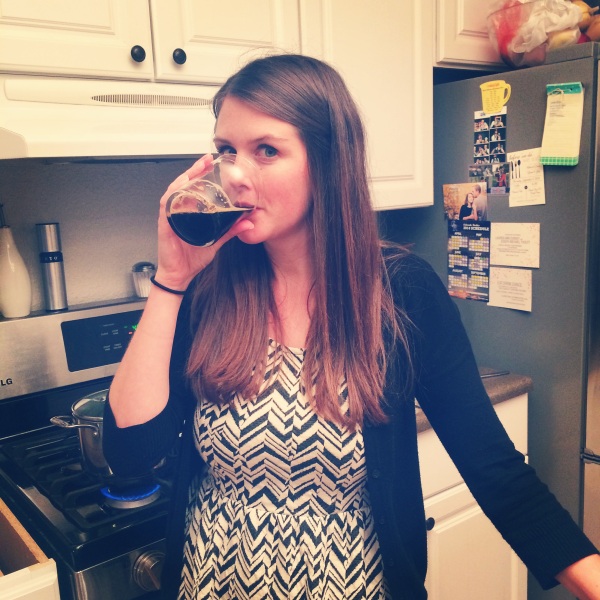 5:45 AM came way too fast the next morning!  But I was ready to attempt a 10K after not much running in the past month and having not run 6.2 miles since the Bolder Boulder… The 10K start line was actually pretty close to our house and we got there and parked with a good amount of time to spare.  Um, that NEVER happens!  I almost always miss my race wave.  Go figure that there were no waves at this race. 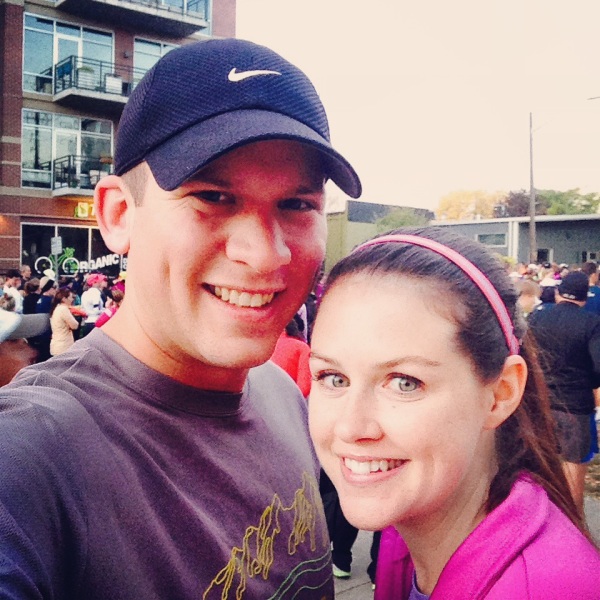 The race went really well!  I should probably stop letting myself believe that a 10K will kill me 🙂  Actually, the whole thing went by relatively quickly.  They only had the first mile marked so I had no idea where we were until we ran up to the state capitol building (literally through the parking lot — so cool!) and I realized we were already at the finish.  The 1st place half marathoner finished RIGHT BEHIND us.  That is so crazy fast!  We stood by the finish line to cheer on the other runners and got to see the first female half finisher go by. 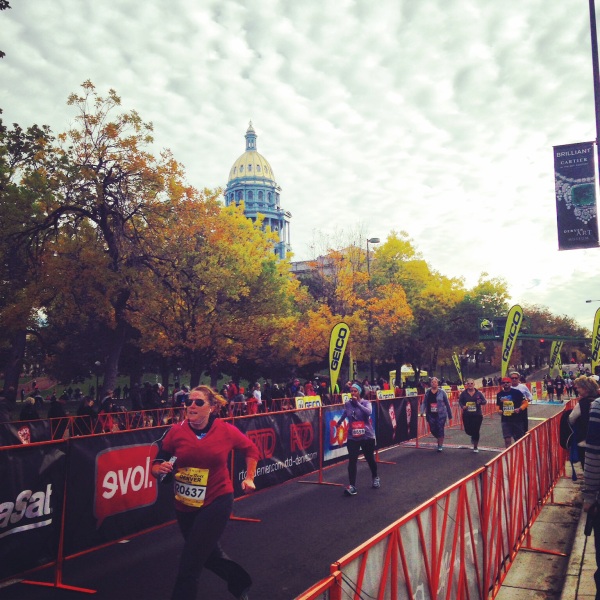 I love this race.  I never fail to feel empowered and inspired afterwards.  Joey and I have already agreed to sign up for next year’s half.  I’m feeling ready to jump back into it and challenge myself.  Now if only I could work on that whole speed thing.  P.S. It was just a little bit colder than I would’ve liked it to have been.  I was fine mid-race but walking around afterwards I was freezing!

We took ourselves to breakfast afterwards and just barely missed the Denver brunch rush.  No wait, the Denver Brunch Rush.  It’s real and it’s not to be taken lightly.  Last time we tried to eat at Jelly, we showed up and the restaurant was closed due to a power outage so we were excited for another shot at eating there.  I dove headfirst into a piping hot almond milk latte (see above comment about being freezing), while Joey treated himself to a Bloody.  I’ll be honest, I liked Jelly but it just seemed a little bit too similar to Snooze and between the two, Snooze wins by a mile!

The rest of the day was spent grocery shopping (that Whole Foods bulk aisle, ay yi yi…), hanging out in the kitchen (more apple pie filling, some granola and pomegranate arils) and Joey chasing me through the house every time the Cowboys scored so that he could pick me up and yell (please send help!).  Plus some reading, Gilmore Girls-watching and spaghetti squash-roasting.  Have I mentioned how much a love fall?

P.S. Does anyone have any good restaurants recommendations in the Dallas area?