Monday was Joey and I’s anniversary.  When I mentioned this to my mom earlier that day, her only question was “Well did Joey get you flowers?!”  My answer?  “No, but he picked out a fancy restaurant in Denver and made reservations for dinner!”  To me, that’s ten times better than flowers.  I will always accept flowers of course, but spending the evening together on an outdoor patio with wine, delicious food and good conversation is the best way to my heart.

We ate at Rioja, which is a “Mediterranean-inspired” restaurant on Larimer in Denver.  We were really lucky to have amazing weather for the occasion and to have a table on the patio open up just as we arrived.  Dining al fresco is the best, isn’t it?

Goat cheese biscuit, lavender sourdough and whole wheat roll.  Plus soft butter!  Don’t you hate when they bring out chilled butter and you end up ripping a hole in your bread instead of spreading it?  And then this came out. 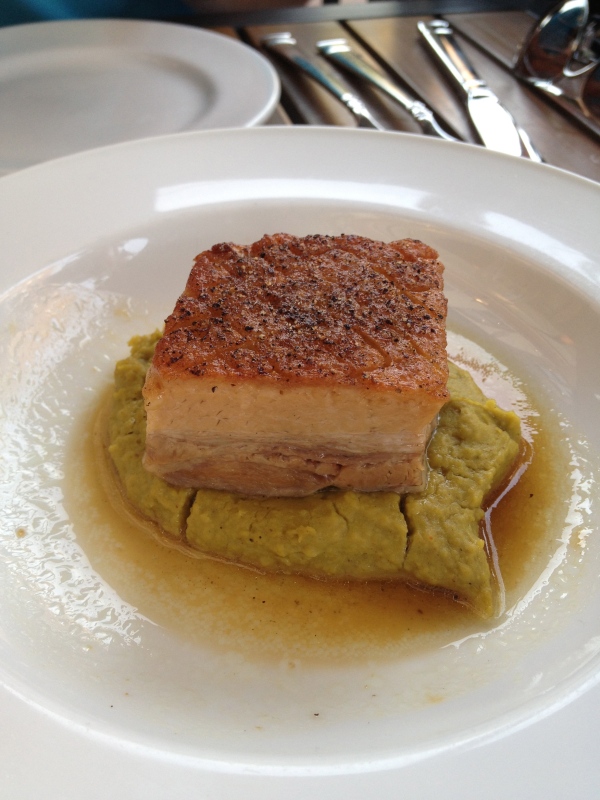 Guys.  That’s a cube of bacon.  Seriously.  And I know it looks gross but it tasted like the most amazing piece of brisket!  It wasn’t insanely salt or insanely fatty.  In fact, it wasn’t fatty or salty at all!  Are you as amazed as I clearly was?  And that curried garbanzo puree underneath was to die for.  When I saw this appetizer on the menu I said “I AM NOT GETTING THAT BACON.”  Followed by, “Wait, how can we not get that bacon?!”  We also ordered the artichoke tortelloni appetizer and it was amazingly good.

I have to commend Rioja on it’s timing.  Joey and I hate when restaurants rush your entrée out while appetizers are still being eaten.  We had a good 20 minutes (our waiter warned us when we ordered our entrées that Joey’s dish would take that long, so we were prepared) between apps and dinner plates to people watch (Larimer is a busy street!), sip our drinks and take in everything around us.

I ordered the seared sea scallops and would you just look at all those components!  I loved just about everything — from the black truffle vinaigrette to the grilled ramps — except the actual scallops.  To be fair, I’ve never had a chef-prepared scallop and mostly ordered the dish because I wanted to know what good ones taste like.  I discovered that I just don’t really like the taste/texture of scallops.  Oh well.

Joey got the pan roasted chicken and it was HUGE!  He brought about half of this plate home, which is very unusual for him.  There’s a bacon-golden raisin bread pudding underneath that I kept sneaking bites of, but as good as that was, the chicken was the definite star.  It was so moist and flavorful.  I had serious entrée envy.  Luckily Joey was willing to share. 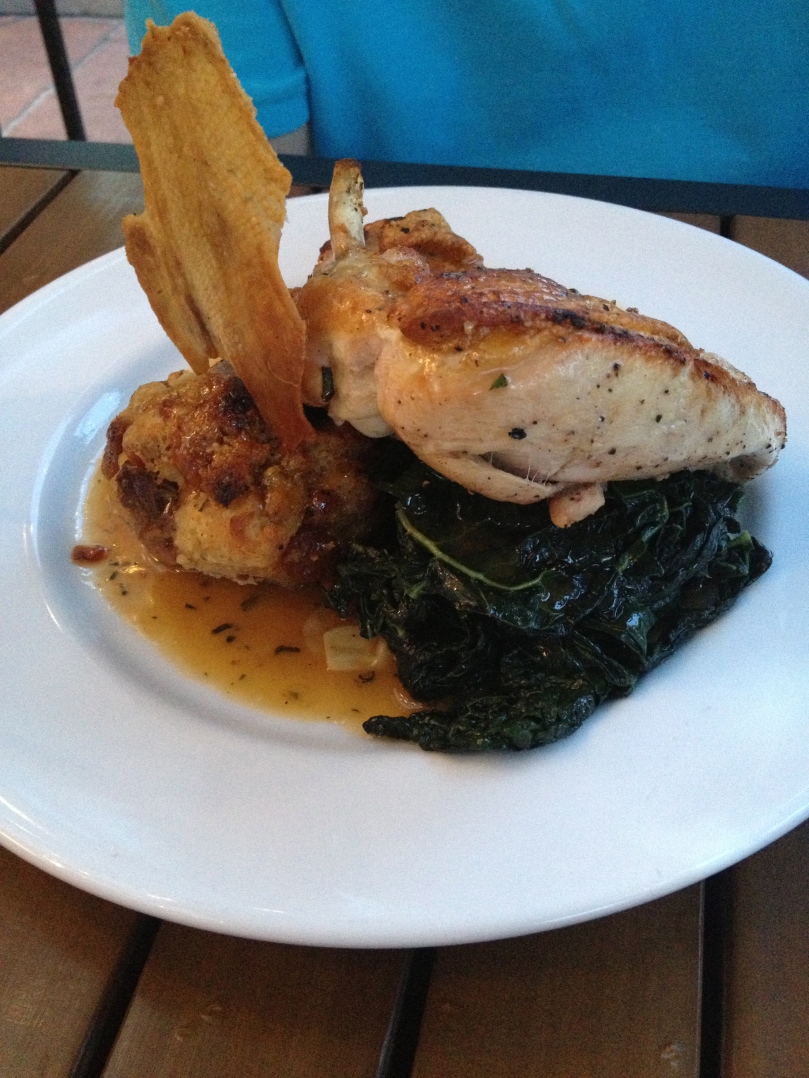 The chicken also came with braised Tuscan kale that neither of us cared for.  When we had our food boxed Joey requested that that kale not be included and our waiter smirked at us.  And that’s the one part of the restaurant experience I wasn’t that happy about.  The waiter filling our bread and water needs was great, but our actual waiter was a little bit condescending.  Maybe it was just a fluke.

And even though we were pretty full, there’s always room for dessert.  Especially when it’s teeny white chocolate cheesecake bites!  We weren’t totally on board with the toasted black sesame ice cream (it was a bit gritty…) but the “sesame nougatine” which I described as sesame granola and Joey lovingly described as birdseed was a deliciously crunchy contrast to the cheesecake.

Another fun restaurant experience and another year under our belts!

One question, would you have ordered the bacon??