It’s official.  While making a Friday evening trip to Ikea (never again!) we heard the countdown to Christmas music on the radio and now BAM!  It’s the holidays.  I guess it makes sense seeing as Thanksgiving is this week.  It’s coincided with some actual cold weather (it snowed last week!), so yeah, it’s feeling pretty holiday-ish.

After that hour long drive to Ikea, we met up with friends — Jenn lives nearby and happened to be out getting dinner — and enjoyed some Irish Pub food and beer.  Then we headed to a concert (!) where we met Bobby and Becca.

We actually know someone in a band.  That plays actual shows in Denver.  How cool is that?  The show had a few different bands opening for the headliner, PLACES, who was playing their last show.  I’d never heard of them but a girl in the audience was crying during their performance so they apparently had some die-hard fans.  PLACES and Rumours Follow (the band we knew) were both really good.

The second half of Saturday was kinda packed so I made sure to spend the first half relaxing.  Someone insisted on removing the first few rows on tile in our kitchen because we’re having hardwoods put in next week!  I insisted on making pancakes, catching up on Parenthood and going for a run.  Also, our friend and photographer Chris brought over some pictures from our engagement party.  How precious is this one of my dad and I?

Or maybe that’s a “sorry I gave a toast even after you told me not to” hug.  Either way, I love it.  After all that, we met with a local stationary store to talk Save the Dates.  Pretty sure I was just asking Joey how places like that get enough business to afford rent in the highlands but it was packed the entire time we were there.  So what do I know?  Then we made some quick visits to our wedding venues to show them to Joey’s dad. 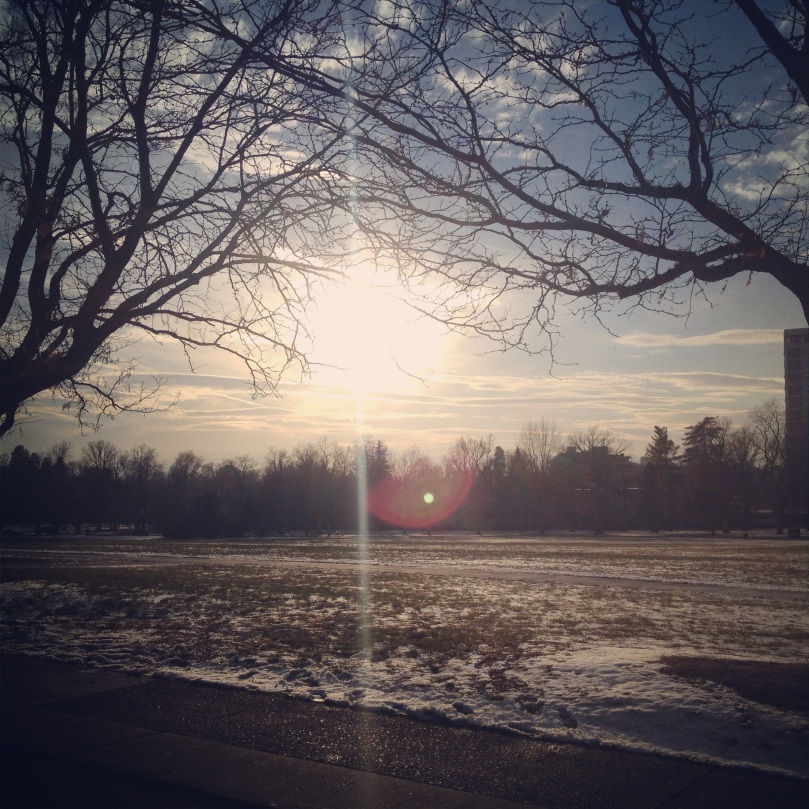 Cheesman Park was looking beautiful as usual.  And the sunset view was pretty awesome too. This was the first time we’d been to the park since reserving it at the beginning of the month and it felt pretty special knowing we’re actually getting married there.  We also stopped by our reception venue, which happened to be hosting a wedding later that night.  It was so helpful to see it all set up, plus I had Hannah come so I can bother her with all sorts of set up questions.  That’s what the Matron of Honor is there for, right? 😛

Pizza for all afterwards!  We tried Pizzeria Locale for the first time and I was kinda sorta not all that impressed.  While I loved the whole assembly line, get to watch them cook right in front of you, personal size pizza thing, the entire bottom of mine was charred and call me crazy, but I’m not a huge fan of the flavor of burnt crust.  Which totally didn’t stop me from eating three of the four pieces.  Afterwards, Joey and I headed to the Nuggets game.  Does it seem like this day is never ending? 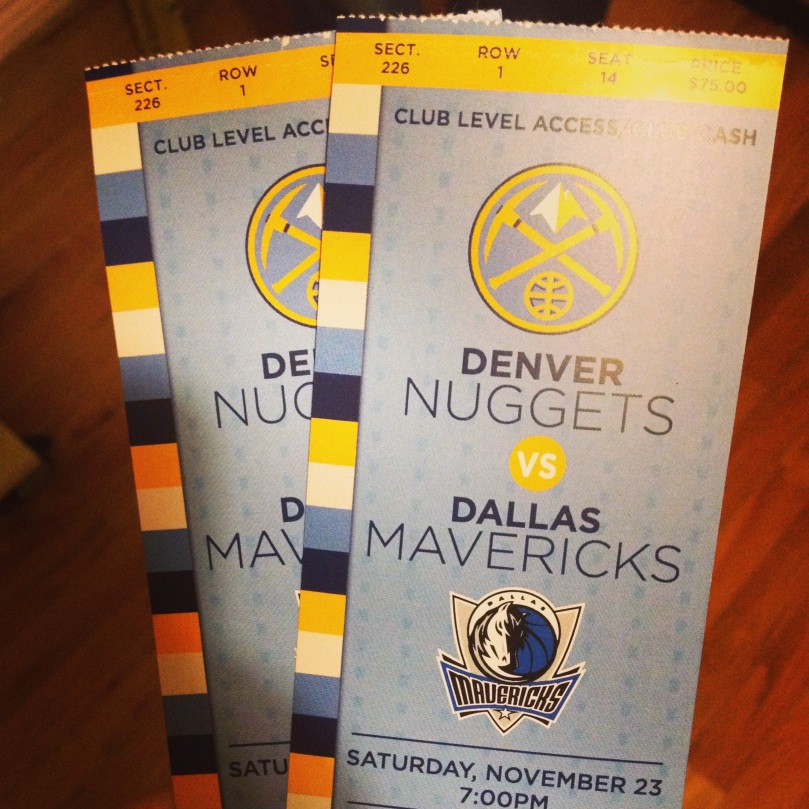 I’d like to pretend I as all revved up after an exciting Nuggets win (just barely!) and did something really fun afterwards, but instead I went home and fell asleep on the couch halfway through SNL.  More specifically, half way through Weekend Update.  That’s the best part, can’t they put it a little closer to the beginning of the show?!  P.S. How AMAZING does the SNL line up for December look.  I basically freaked out when I saw Jimmy Fallon and Justin Timberlake in the same episode. 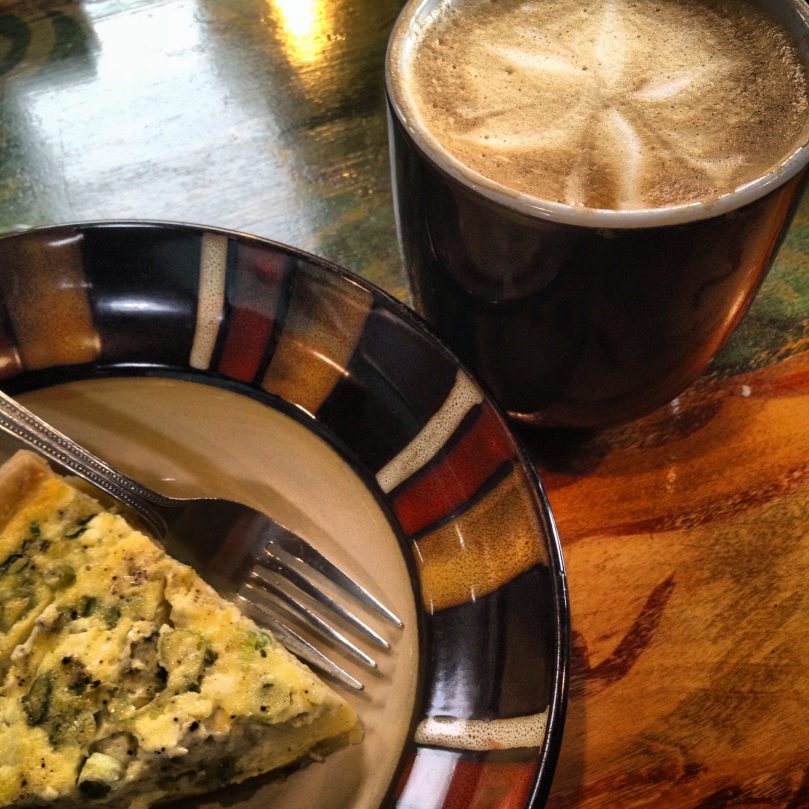 Sunday started with this quiche from Common Grounds (why is it always so packed in there?!) that I deemed the second best quiche I’ve ever tasted.  Mom always wins for the first best.  I think it was leek and cheese?  And also a pretty latte that had me buzzing all.day.long.  Afterwards, we bought ski passes!  My cousin from Nola is coming to town at the end of December and really wants to give the whole skiing/snowboarding thing a try.  I’m wondering if anyone will notice when I go hide in the lodge.

Later I joined Jenn and Alyssa at their place for mimosas, food and… football, which I’m pretty sure I paid 0% attention to.  Who can pay attention to a bunch of guys running around in the cold when there’s homemade guac and enchiladas?  I ended up “watching” the end of the Broncos game at home.  And by that, I mean every time the AMAs went to commercial Joey would change the channel back to the game and I would immediately zone out, but OUCH, that was a rough ending.  And I’m referring to both the end of the game and the AMAs.  Taylor Swift for best artist again?  Please no.

So now it’s Monday, our kitchen floor looks like this and I have so much work to do, but it’s a three day work week and I’ve got Christmas music playing so I’m ready to fly through it and get to Thanksgiving!

One thought on “Weekend Things”