I should preface this post by saying that I’d been to Maui before.  Back when I was 16 (which, no, wasn’t last year) and apparently lacked any appreciation for travel or vacations where your parents pay for you to do everything.  Ungrateful is a word that comes to mind.

So that being said, I was so glad to have a second chance at seeing the island and actually taking in all the sights, sounds, smells and tastes.  Starting with spam, obviously 🙂

We hit Da Kitchen as soon as we left the airport parking lot and I think we were unanimously unimpressed, but I won’t lie, the spam musabi was pretty darn good!  When in Hawaii, right? 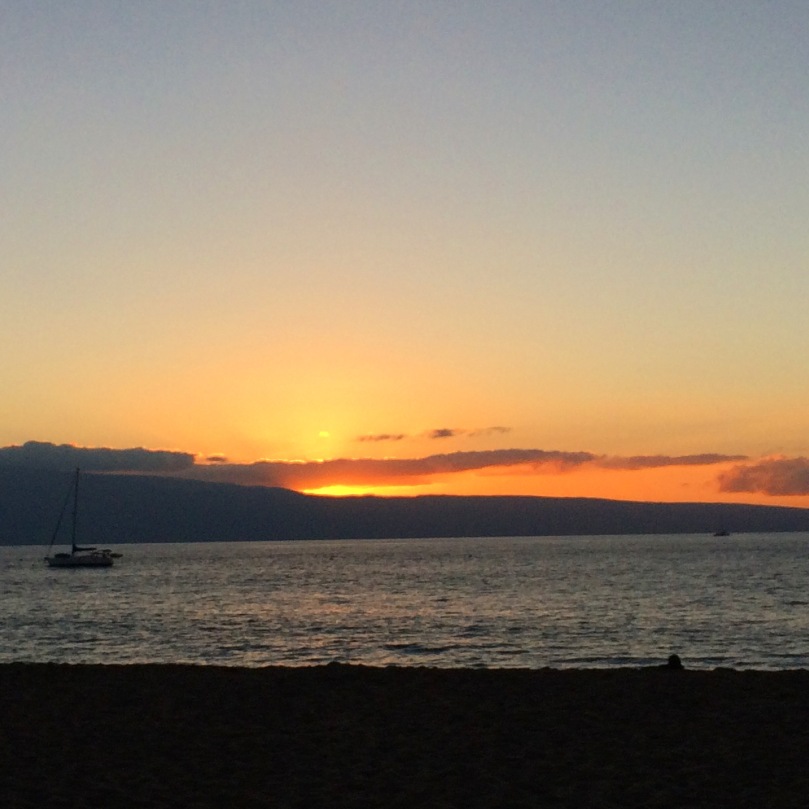 We stayed in a hotel/condo right off the beach and made it there with just enough time to watch the waves crash in (they were A LOT bigger than I had expected) and watch the sunset with our toes in the sand.  Possibly — no, DEFINITELY the softest sand I’ve ever felt.  We walked the path along the beach, wound through the shopping area and bought beer, because: DUH.  Joey carried it back to our place on his shoulder and we got many stares and “where’s the party?!” comments.  Everyone likes a person who likes beer.

We spent our first full day in Maui snorkeling.  Aaaaand, I have zero photos.  FAIL.  Truth be told, I left my phone and camera down below because I didn’t think ocean and electronics were a good mix, but I’ll sum it up for you.  They fed us cinnamon rolls and teriyaki chicken and we saw a real life sea turtle and I drank three Mai Tais and zero water and was THISCLOSE to fainting (don’t be like me!) and we saw SO MANY whales.  It was incredible.

Later on, we went to dinner at Relish and I got this crispy chicken with spoon bread and gravy and it was epic.  One of the best meals of the whole trip, IMHO. 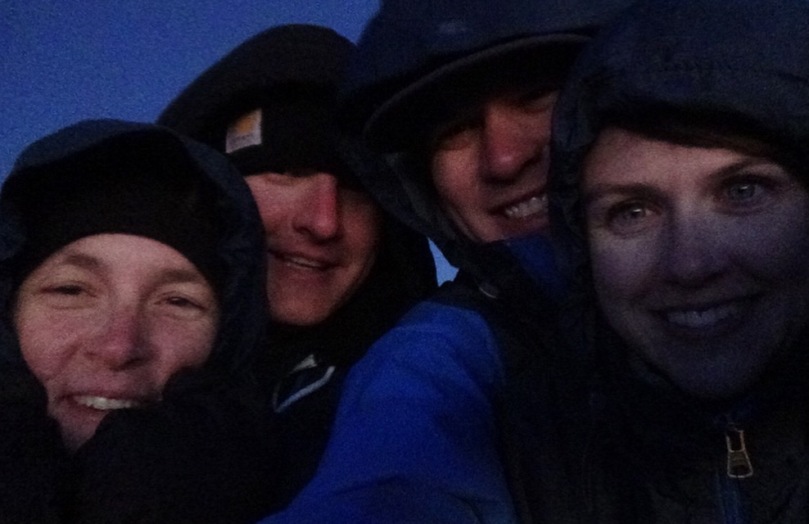 When Lori was asking for wish list items for this trip, the only one I had was to see the sunrise at Mount Haleakala (um there’s supposed to be a little line accent over that a, but WordPress apparently doesn’t recognize the Hawaiian language… rude).  Even if it meant waking up a 2:30 AM, driving for an hour up a mountain in the dark, standing in the cold for another hour and then riding a bike back down.  And even though everyone told us it was going to be cold, we thought “yeah, yeah, we’re from Colorado, we can handle it” and then it turned out to be REALLY COLD.  And REALLY WINDY.  As in the wind was going straight through every layer I was wearing.  I’d like to never feel that again. 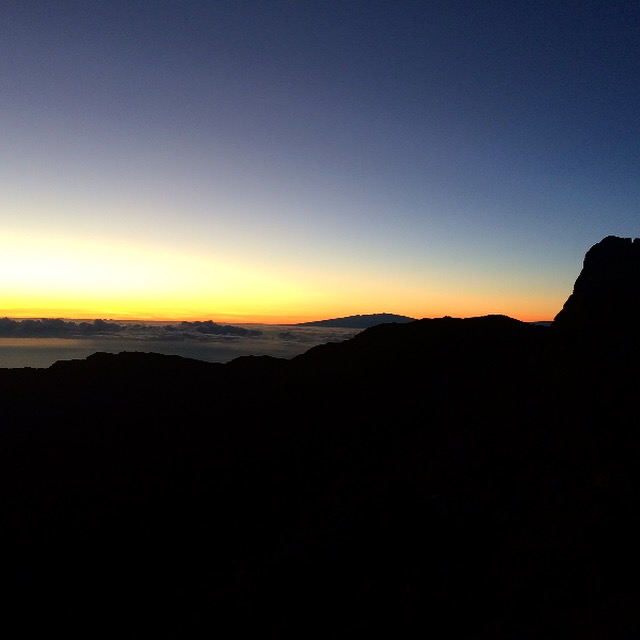 As far as the actual sunrise goes, in all of our opinions, we’d seen better ones right at home (and were warmer when we saw them!).  So, honestly, I’m really glad we did it and I wouldn’t tell anyone NOT to do it, but I also wouldn’t tell anyone they HAD to do it.  Also, do you see those clouds?  We were above them and that kind of baffles my mind.

Hey, look!  We weren’t the only crazy people up there 🙂 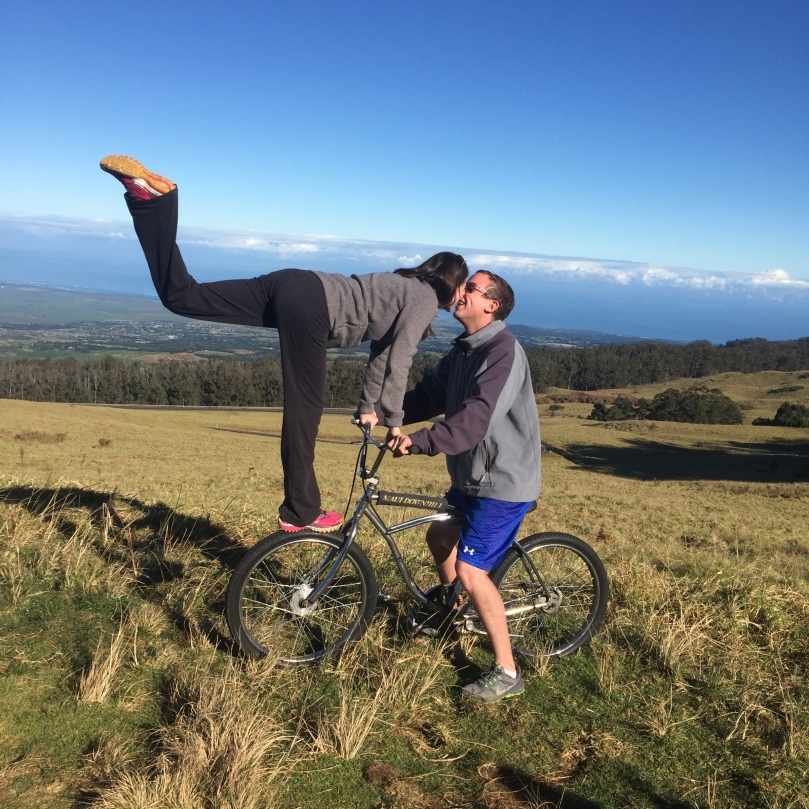 Afterwards, our tour guides drove us a little further down the mountain, got us all hooked up with bikes — which didn’t even have gears, because you seriously just coast all the way down the mountain — and lined us up to ride.  In my mind, I had pictured a bumpy dirt path, but in reality we rode down the middle of the paved road so this part ended up being no big deal.  Except that TWICE someone took my helmet — once by a lady in our group before we took off and again by her husband when we stopped for a break.  I can’t even with either of them… 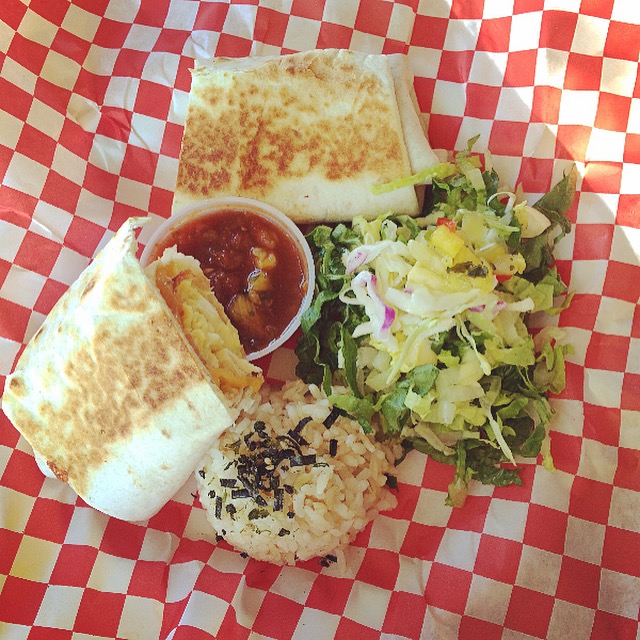 Basically, I’d never been so excited to see food after all that.  Our tour guides drove us to this food truck (no arguments here!) and the first thing they said to me when I stepped up the window was “do you want some kombucha?!”  Um YEAH I DO!  P.S. A breakfast burrito is all I need in this life.

This vodka distillery was in the same parking lot as the food truck and get this… they made vodka using pineapples.  I’m reporting that without actually knowing what it means exactly.  But I do know I liked all those mustachioed vodka barrels.  And I do know I didn’t realize pineapples grew from bushes until I saw it with my own eyes.

Afterwards, once we were all sufficiently napped (or was that just me?), we headed back out to try to see some surfers on the North Shore.  But it turned out the waves were INSANE that day.  I was pretty sure going out in that ocean was a death wish.  But all was not lost.  We got to check out the little town of Paia and it was basically Hawaiian Boulder.  We ate at this incredible restaurant that Joey picked out, called Hana Ranch Provisions.  I had amazing gnocchi but because I’m that annoying person who wants to taste everyone else’s food, I can vouch that Adam’s fish was actually the best fish I’d ever had and Joey’s burger was definitely a Top 5, maaaaybe even a Top 3.

Wishing you all a happy Wednesday and let’s all cross our fingers that it doesn’t take another two months for me to post the second half of our stay in Maui.

One thought on “Our Trip to Hawaii: Maui”