Part of what made this vacation so good (and easy!) was the fact that everyone felt free to do their own thing.  The eight of us didn’t feel obligated to eat every meal together, walk to every hotel together, or see every attraction together.  I don’t know about your family, but my family has this problem where we can’t seem to coordinate or agree on anything during vacation.  It was really nice not to have that problem this time around.

Take Monday for instance, half of us wanted to go see the Hoover Dam, while the rest of us were content to relax at the pool all day.  I happened to be part of the latter half.  Joey, Hannah and I grabbed breakfast (and Bloody Mary’s of course!) over at Planet Hollywood then spent the rest of the day at the pool.  Funny Story: We headed over to the “party pool” when were first got there and it was 1) completely empty and 2) $100/chair or $500/cabana!  Shockingly, we decided to pass and headed back to one of the three free and just as relaxing pools. 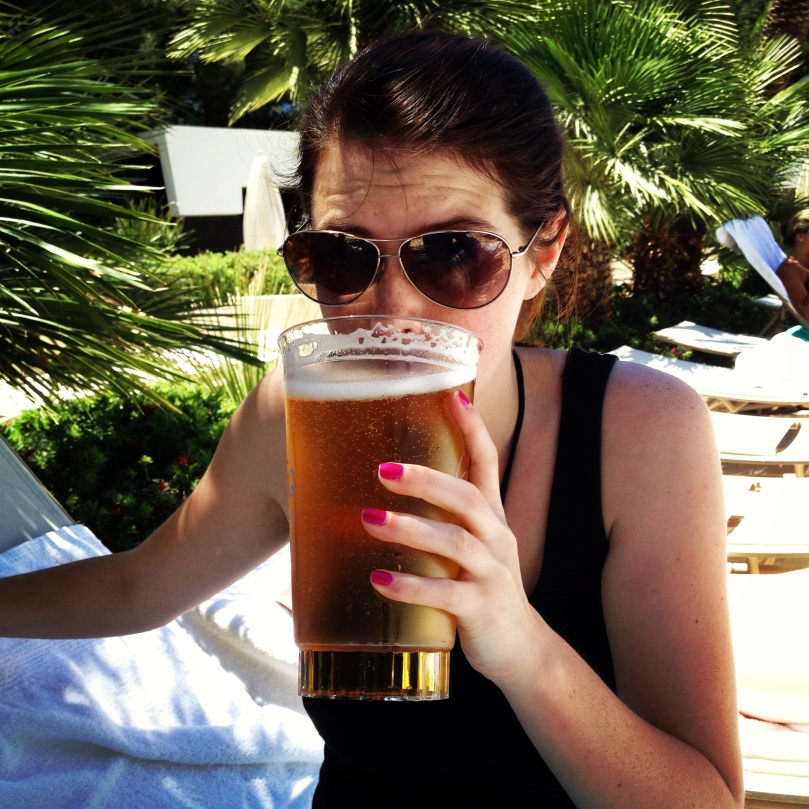 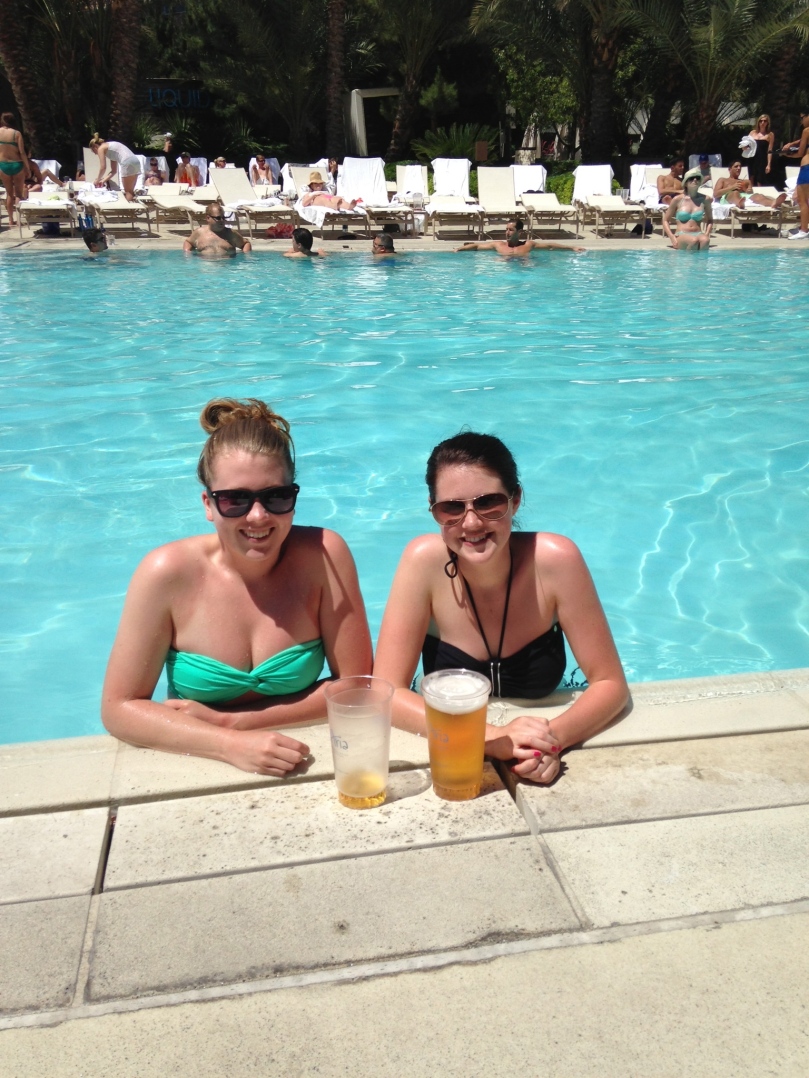 I drank two of these bigger-than-me beers and felt prrrrrrretty good.  Cut to Hannah and I floating around and gabbing in the pool for hours, followed by a totally unplanned nap.  Oops!  Once the other half of our group got back from the dam (which I was told was very cool), we all met up for dinner at Todd English PUB, which we actually went to three times during the trip.  It was inside our hotel and had a nice outdoor patio in the shade.  Plus, taps at the tables?! 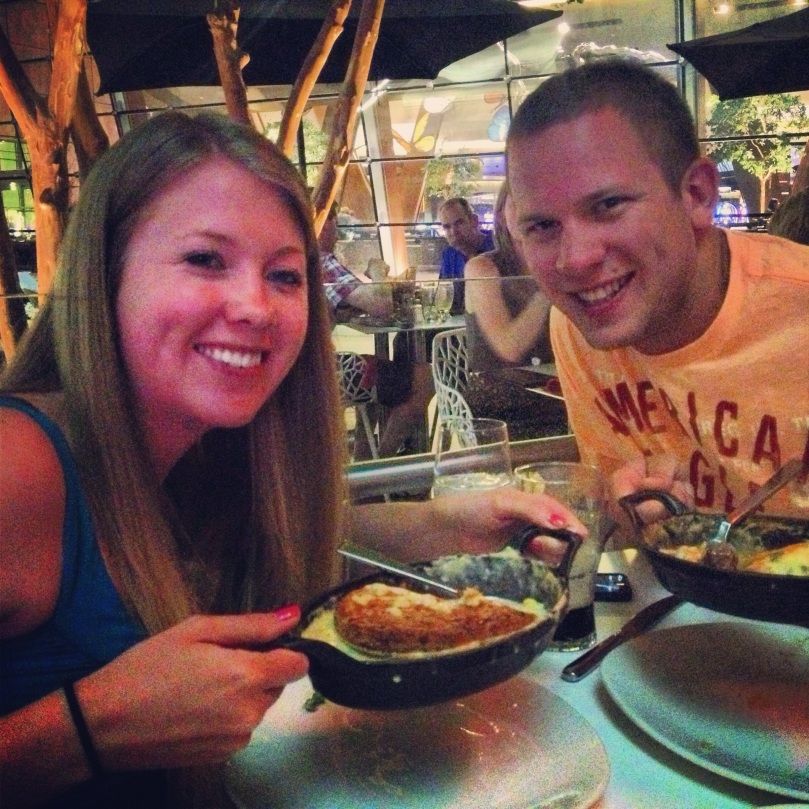 After dinner, we all caught a couple cabs and headed over to Fremont Street.  I kept calling it “Old Las Vegas” while Joey called it “Downtown Vegas” but either way it definitely has a different vibe than the Strip.  I think my uncle described it as “seedy.”  Certainly not as glamorous as some of the hotels on the Strip, but fun in its own right.  The whole reason we went was because the whole street is covered by this giant canopy that plays a light show every hour on the hour.  The one we saw happened to be Doors themed, so think lots of psychedelic colors and images of Jim Morrison.  I loved it!

We even had time to catch part of the pirate show in front of Treasure Island afterwards.  It was so cheesy and I could not stop laughing.  We ditched it to see the volcano erupt over at the Mirage instead.  I can’t believe how hot it feels while those flames are going.

On our last day, we all met up at Café Vettro for breakfast.  My uncle and Michelle had an earlier flight so they just stopped by for a few minutes to say goodbye.  I love seeing my uncle and it’s always so sad when we have to say goodbye to him.  Until next time, Uncle!  In less depressing news, breakfast was delicious, the miniature condiments were adorable and Joey snapped a hilarious picture of Hannah giving me the side eye as a scold my mom for refusing to be in a picture with the rest of us girls.

We had to check out of our hotel at 11 AM and our flight wasn’t until 6:40 PM (before it was delayed at least), so we entertained ourselves by strolling through the whimsical garden at the Wynn, gasping at the prices in some of the shops inside the Venetian (a $400 scarf?!) and sampling sodas at the Coca-Cola Factory.  For the record, almost all of the samples were horrible and I don’t think we finished a measly cup between the four of us.  Joey was just spectating as we have a serious bet on whether he can make it through the year without drinking soda. 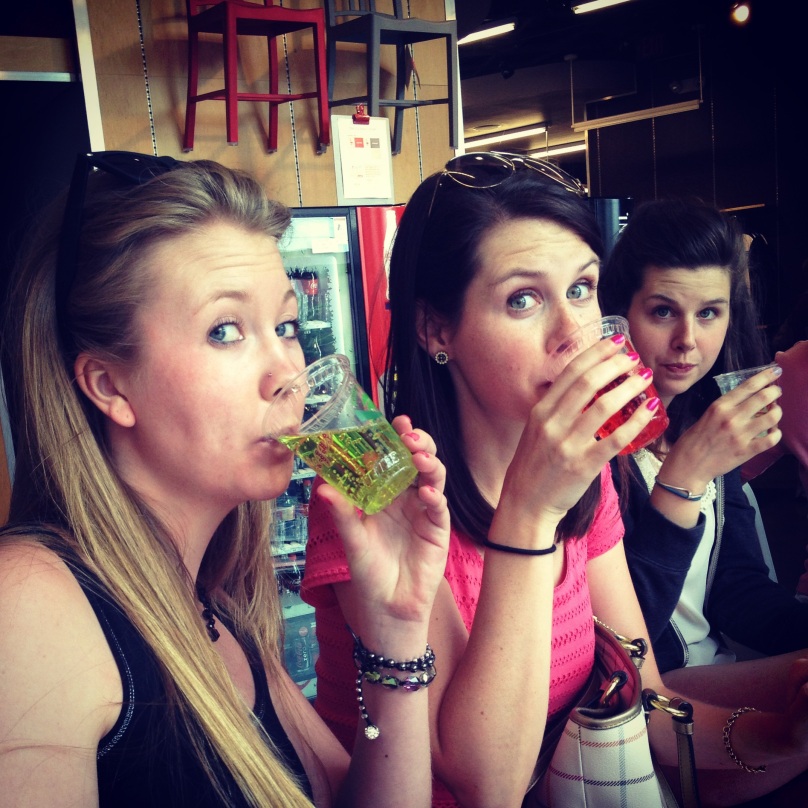 Our one last food stop was at Earl of Sandwich.  I’d heard crazy good things and Joey had seen the place packed back when he stayed at Planet Hollywood in March. One classic with roast beef, cheddar and horseradish and four clubs later we reached the conclusion that the sandwiches were really good (I loved the soft bread!) but maybe not as good as all the hype suggested.  Maybe it’s better at 2 AM?

At this point, we met up with my dad who was grabbing a bite to eat at the PUB and soon heard that our flight was really delayed so we ordered some beers and hung out.  I got a Pyramid Weiss Cream and it was delicious!  We eventually made our way to the airport and hung out at yet another pub-style restaurant (with horrible beer!) until our plane took off.

It may have had something to do with how tired we all were, but back at DIA my mom accidentally got on the escalator thinking we were following her and when she turned around and realized we weren’t she had this huge look of surprise on her face, then walked the wrong way on the escalator to get off.  It was perhaps the most adorably funny thing I’ve ever seen 🙂

I’m so sad the trip we looked forward to for so long is over, but I’m so happy to have such great vacation memories.