I fully intended on writing a Thanksgiving Day post and a separate Thanksgiving Weekend post, but I was too busy loving every minute of Thursday through Sunday that that plan kind of slipped through my hands.  Whoops!

Anyway, it’s official.  Thanksgiving Weekend (or from Wednesday at 3 PM when I left work until Sunday at 11 PM) is my favorite time of the year.  Trumping Christmas, my birthday and Memorial Day Weekend even.  Maybe it’s because I’m all about tradition and I can always rely on running a Turkey Trot with Joey, a perfectly cooked turkey from my mother-in-law, my mom’s stuffing, lots of family love, a post-Thanksgiving hangout with Hannah and Josh and tons of lounging on the couch, but I just can’t help but love every single second of Thanksgiving and the weekend that follows. 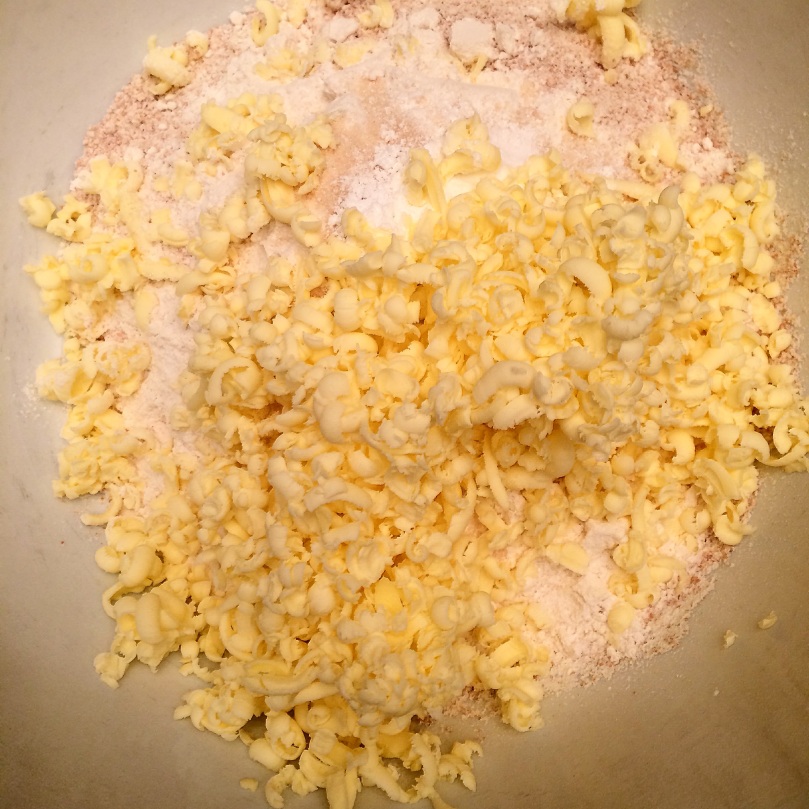 We left work around 3 on Wednesday, picked up some wine then headed home to cook for Thursday.  I made an obnoxiously organized list of our tasks (if that doesn’t scream control freak, I don’t know what does…) and I don’t think the whole process could’ve gone any smoother.  Oh, by the way, grating the frozen butter into my biscuits worked awesomely! 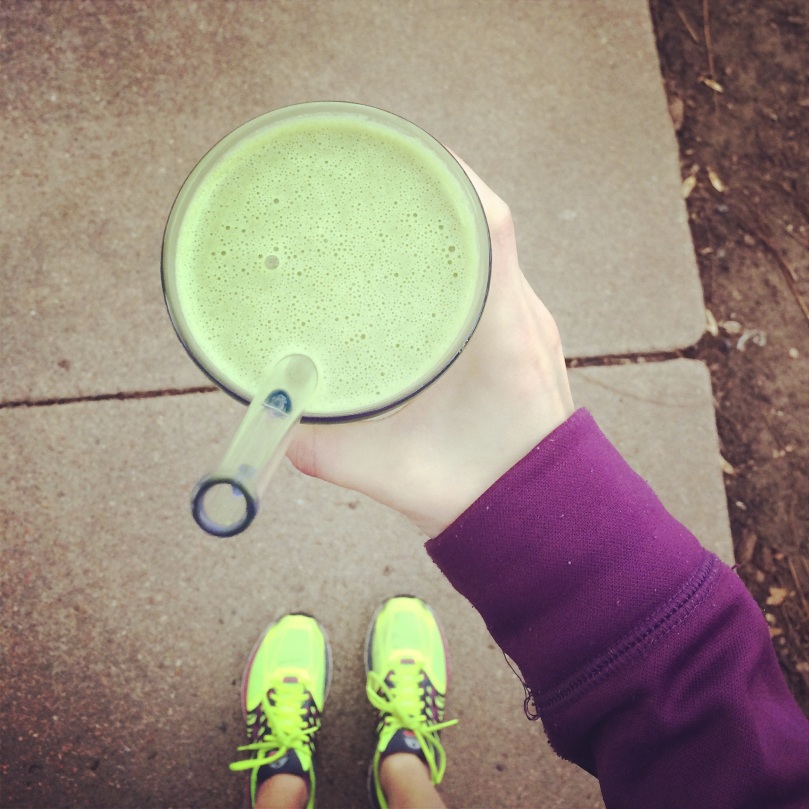 As always, we ran a Turkey Trot Thursday morning.  I made us some green smoothies for breakfast and threw in a good amount of peanut butter.  I think Joey’s exact words upon taking his first sip were “Oooo, me run fast!” so I’ll assume that means he liked the peanut butter addition.  When I first looked up Thanksgiving on the 10-day forecast it was snowy with a high of 20 degrees but at some point it changed to partly cloudy and 60 degrees.  Uh yeah, that’s definitely an improvement.  Except for the part where the track was way too small for the amount of runners, the race was really great.

Lori aced the turkey again this year.  How does she do it?!  And I got to drink some of the wine we brought home from France!  Afterwards, we all settled onto the couch for some football (or more like me checking Instagram every 2 minutes to see what all the Food Network stars I follow were cooking…) and some serious relaxation time.  Because I know the celebration with my family is going to be a little louder, I’m always grateful for a laid back first half of the day 🙂 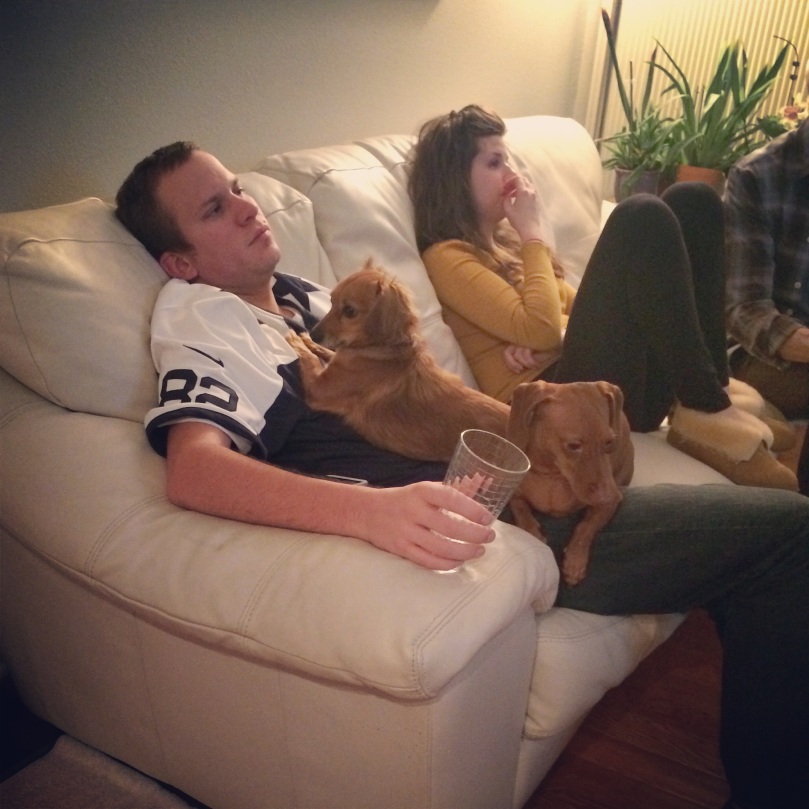 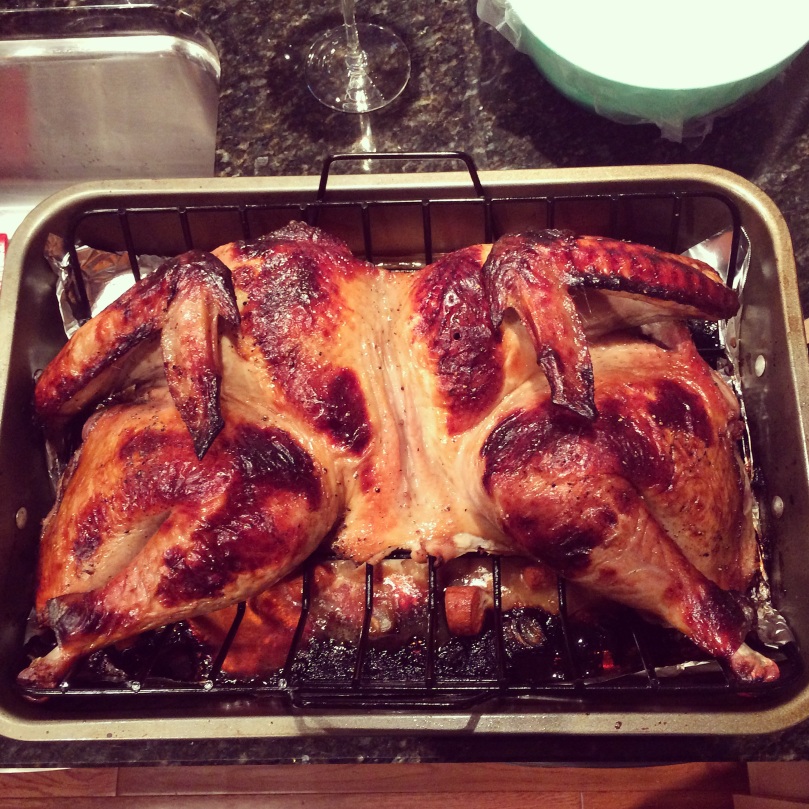 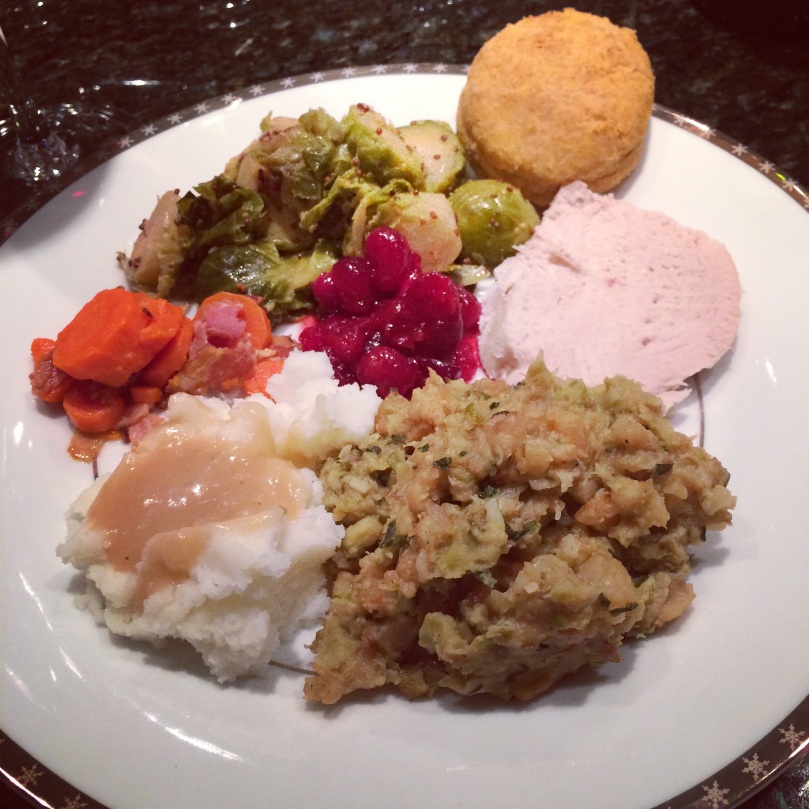 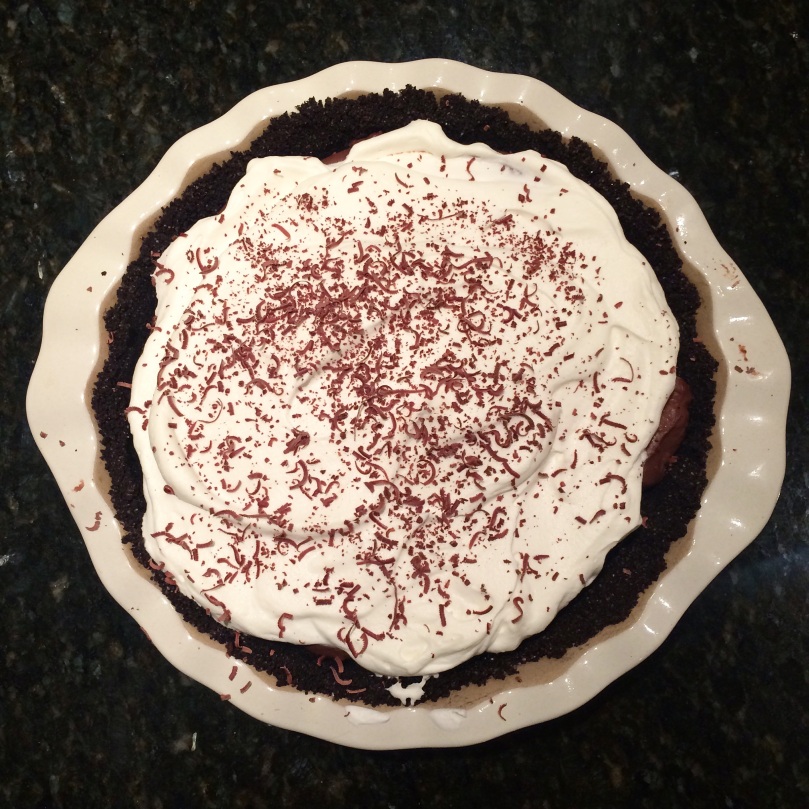 Later, at Chez Dorsey, Joey watched the Cowboys game with such enthusiasm, mom set out appetizers, I popped open the wine, my brother, sister-in-law, niece and nephew showed up and then we dug into meal #2.  My mom had her turkey spatchcocked (or butterflied) this year.  She’s so trendy!  It looks kind of freaky, huh?  A few days earlier, I asked Joey if I could just put a tiny bit of everything on my plate, then fill the rest of the space with stuffing.  I was only kind of kidding.  She also made a chocolate cream pie and it was to die for! 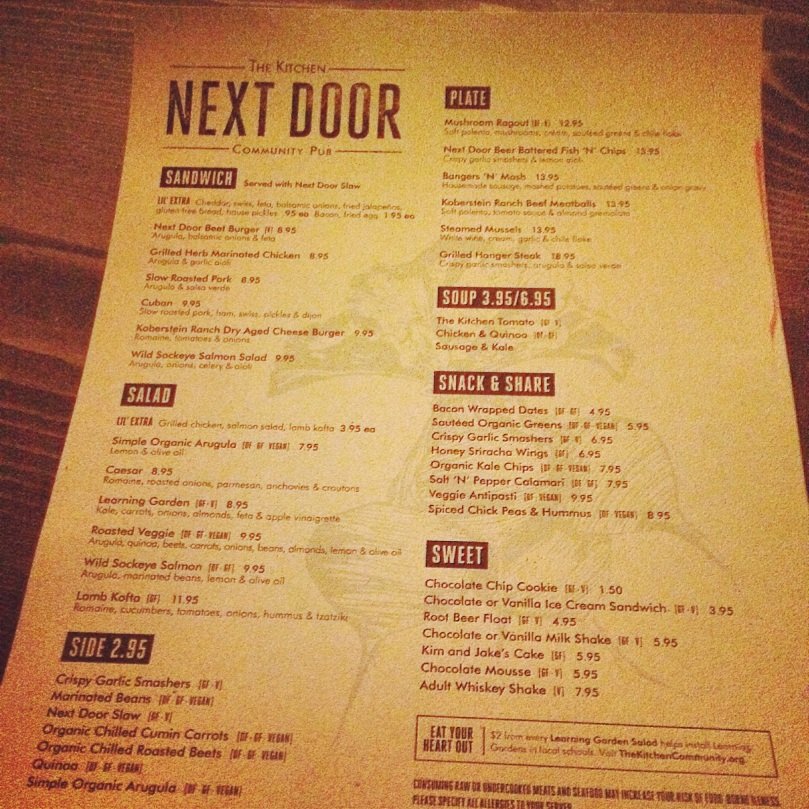 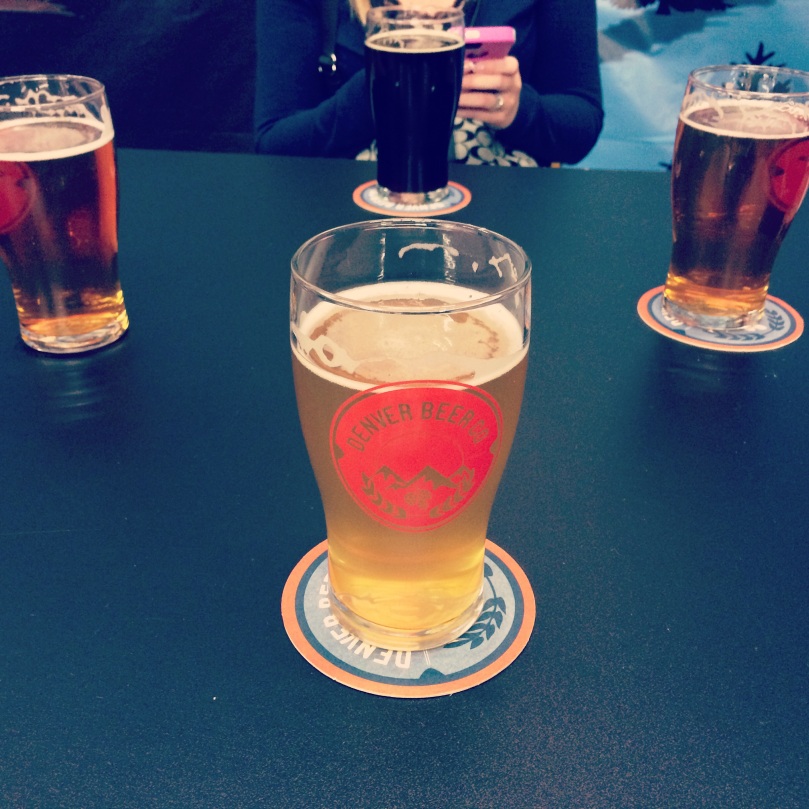 It’s possible I love the day after Thanksgiving just as much as actual Thanksgiving Day.  We walked over to get coffee then plopped ourselves on the couch to watch the Macy’s Thanksgiving Day Parade.  I swear I know less and less of the performing artists every year.  I will say that it was a weird combination of pity and laughter every time someone slipped and fell during a band performance.  Also, one kid’s helmet fell over the front of his face and he had to leave it like that!  Poor kid.

That night, we headed to the newly renovated Union Station downtown for dinner with Hannah and Josh.  The only pre-reno experience I’d had at Union Station was when I accidentally got on the wrong bus and ended up there (let’s not discuss that), but wow, it is awesome in there.  Restaurants, a swanky bar, pretty Christmas decorations and tons of people.  We ate at The Kitchen Next Door then watched the “Grand Illumination,” which conveniently ended up being minutes after we walked out of the restaurant.  Afterwards, we took H&J to Denver Beer Co. Canworks for beer (obviously) and a private tour then ended the night at another brewery down the street.  We live in a pretty cool neighborhood 🙂 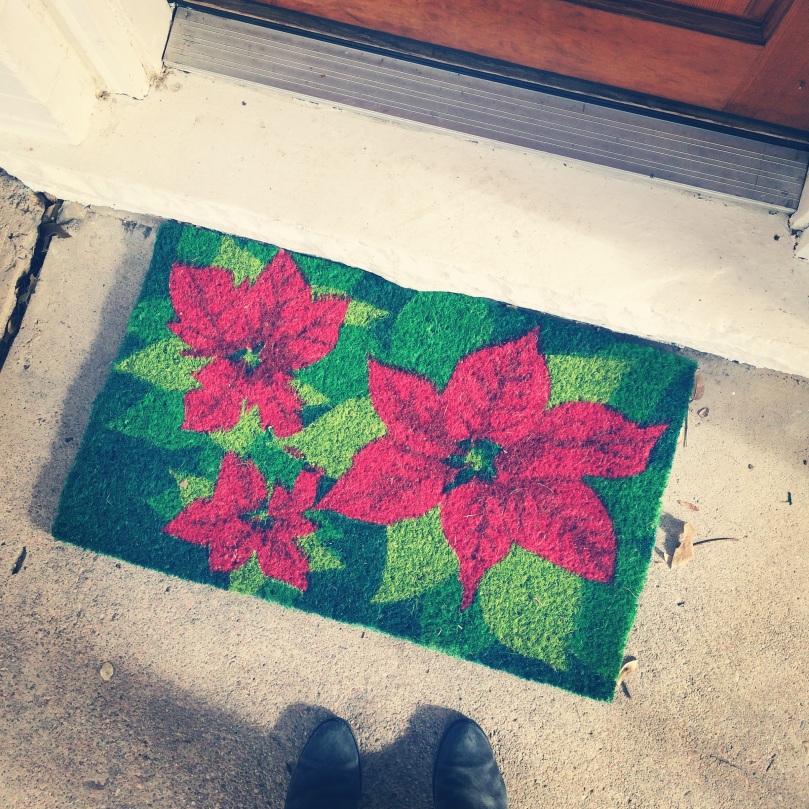 I wish I could pretend Saturday and Sunday weren’t mainly comprised of our couch and Gilmore Girls, but that would be dishonest.  I guess we did also take out the Christmas decorations (twinkle lights are up!!!), kegged our beer, watched What If (I like Daniel Radcliffe so much more when he’s not Harry Potter), went out to Sunday breakfast, went to yoga (okay that was just me) and watched more Gilmore Girls.

And thus ends my favorite weekend of the year.  How was yours?!