Joey and I spent a couple of really rushed days in San Fran (I read somewhere that only tourists call it that but I can’t help it, it’s so much easier!) back in 2010 and we’ve wanted to go back and “do it right” ever since.  This time around we stayed in the Marina District, gave ourselves a full three days (plus two half days) to explore and made a sort of plan.  Sort of in that we made it the day before but better than nothing, right? 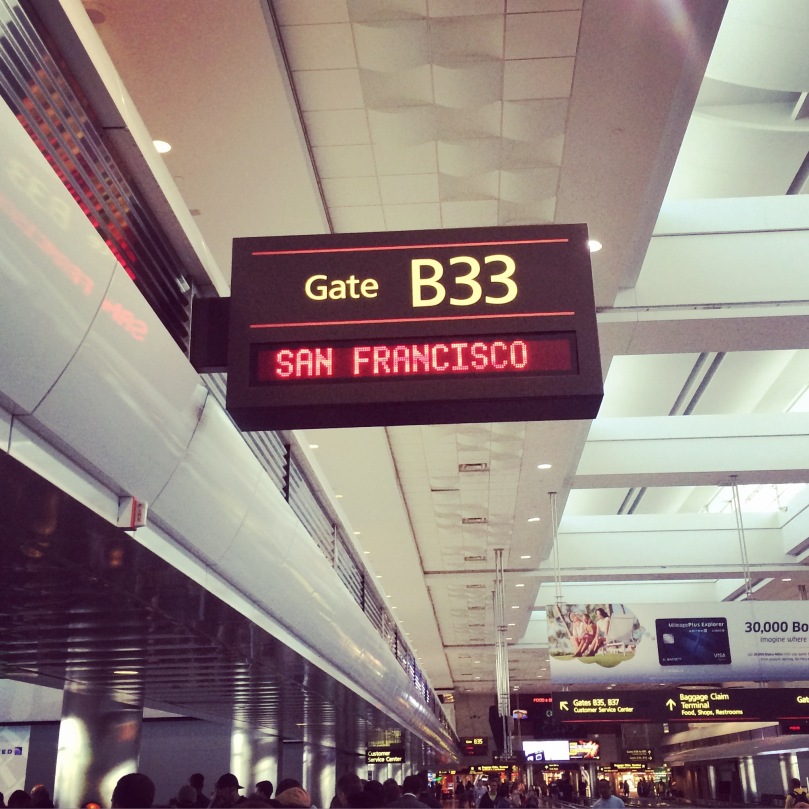 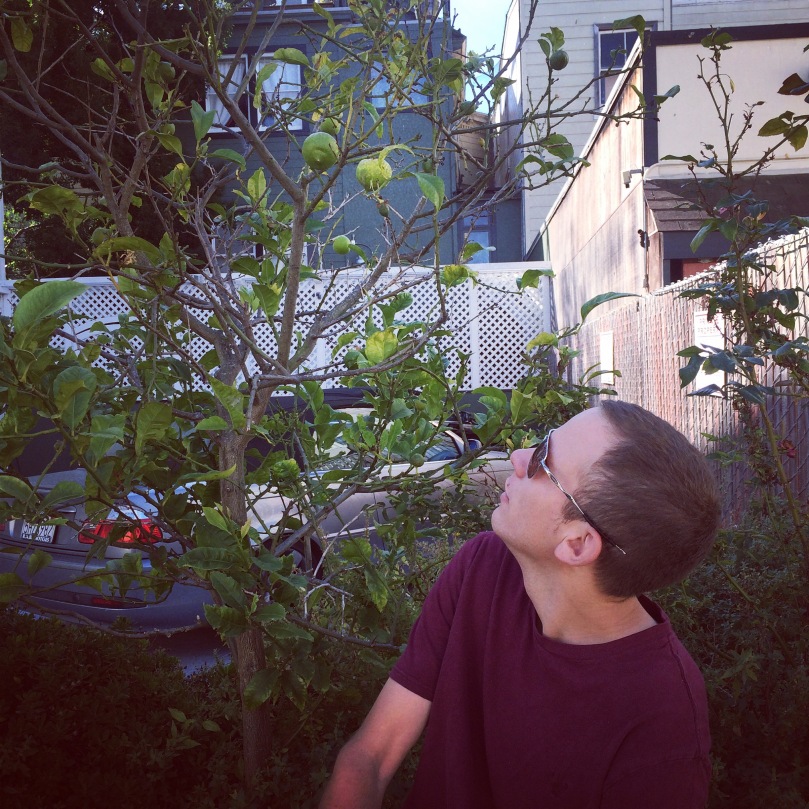 We got in before noon, shared an Uber with the most talkative 22-year old ever and checked into our Airbnb, where unbeknownst to me, the owner and Joey had arranged for the most beautiful bouquet of red roses to be waiting.  Is that not the cutest thing you’ve ever heard?  I feel so lucky to be married to that perfect human. 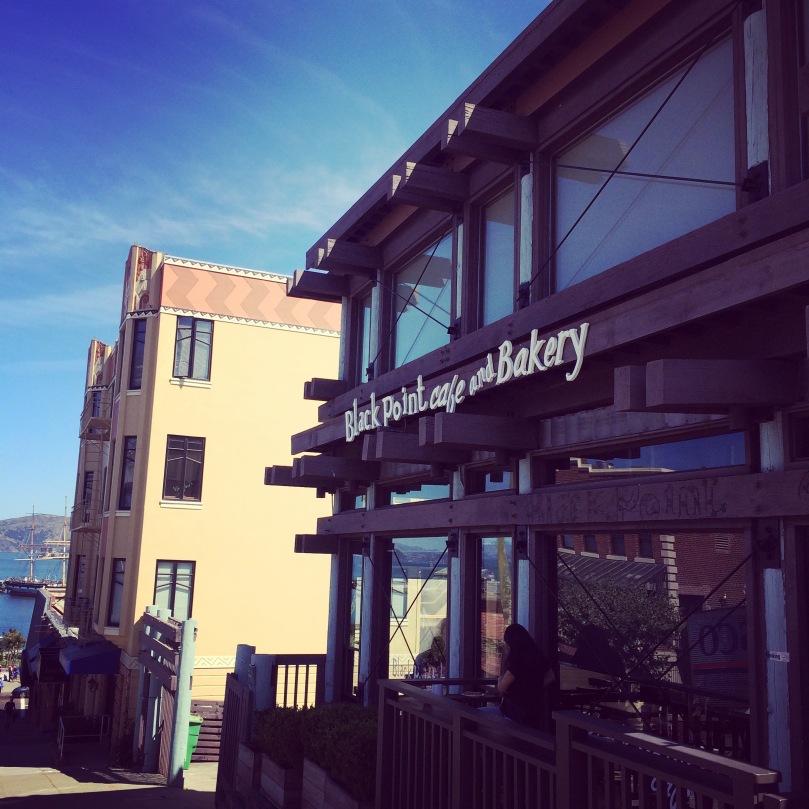 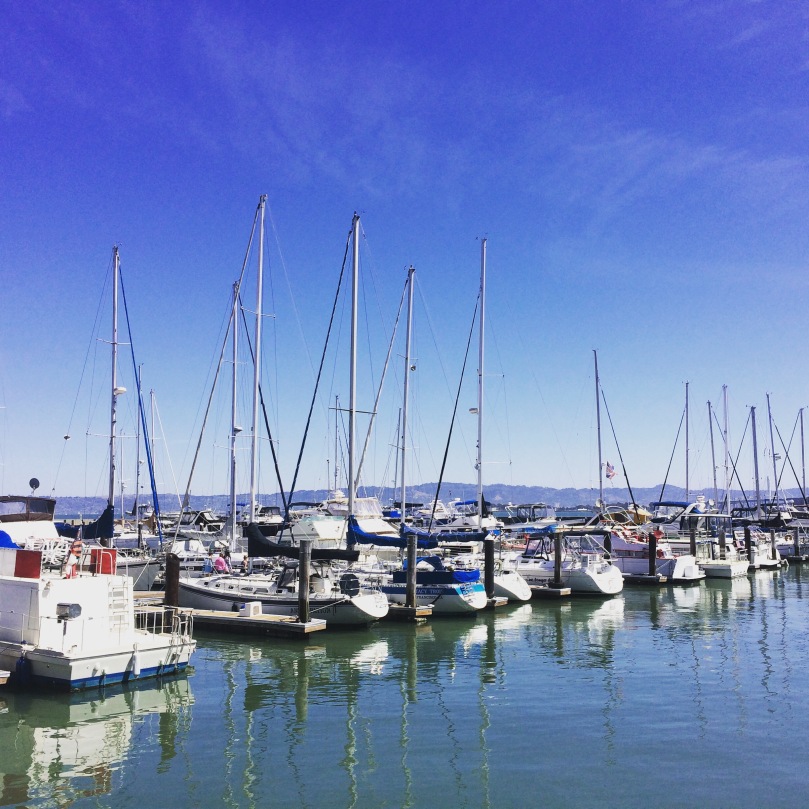 We knew we wanted to hit the Ferry Building for lunch, but we weren’t in any rush so strolling along the waterfront through Ghirardelli Square, Pier 39 and Fisherman’s Wharf seemed like the right thing to do.  First things first, COFFEE.  We went to Black Point Café, where I got an iced lavender latte and was like “man, vacation life is the life for me.”  Pier 39 and the Wharf are pretty touristy but I actually thought Ghirardelli and all its little shops were really cute.

We had lunch at Boulettes Larder and even though I was super disappointed that they had pizza on their lunch menu online and NOT on their lunch menu in real life, I got over it and ordered a pretty little lunch salad that cost an arm and a leg but tasted delicious.  True Story: the farmers’ market was going on a few feet from where we were sitting and when I saw that it was shutting down, I left lunch to go buy every variety of fig I could find.  Priorities.  We ate them for lunch dessert on this little dock where a bunch of people were fishing for sardines?  I don’t even know.

P.S. I love the Ferry Building.

We headed to Alamo Square afterwards to check out the Painted Ladies and lucky us, we discovered that people totally hang out in the grass with their friends and their cool San Francisco beer here!  I kept thinking “this is so Denver!”  And I also kept thinking how much better life would be if we were also hanging out in the grass with cool San Francisco beer, so Joey ran over to a liquor store and grabbed us a bomber to share.  This is going to make it sound like it takes so little to please me, but I was so happy in that moment, people watching, looking out over the San Francisco skyline and sharing an IPA with my favorite person. 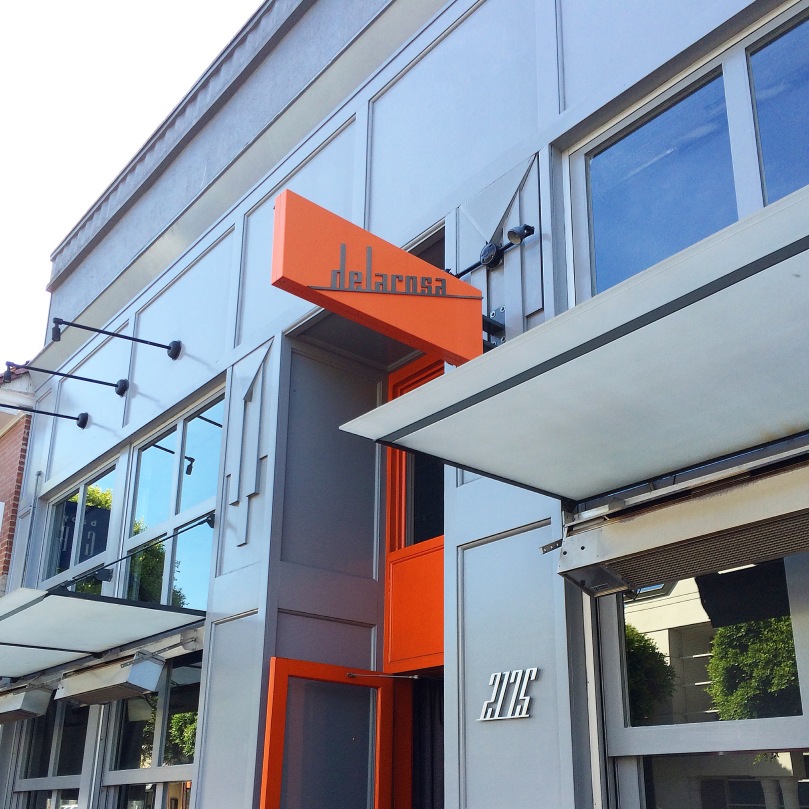 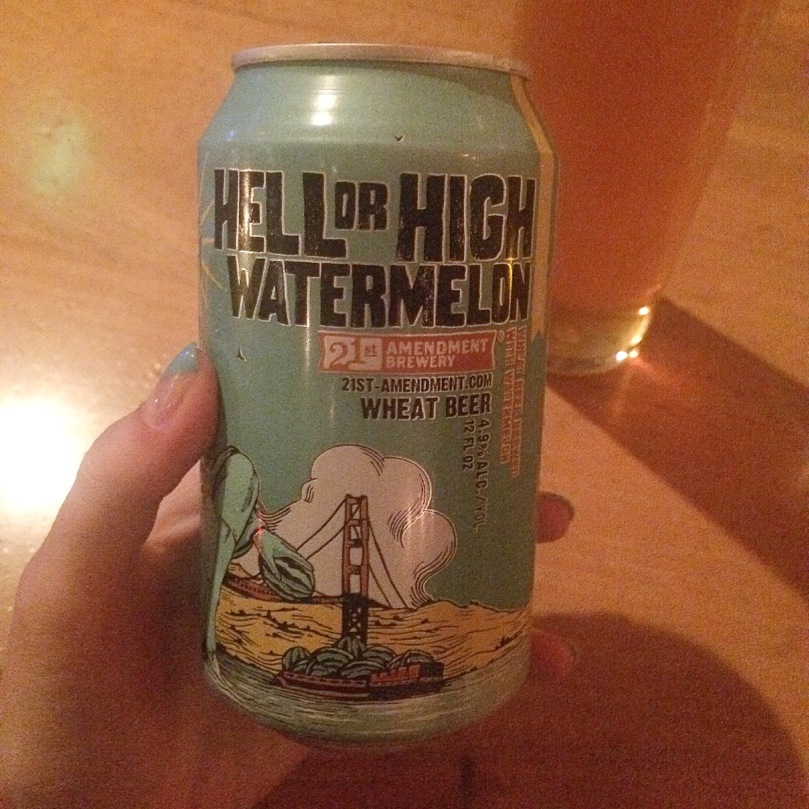 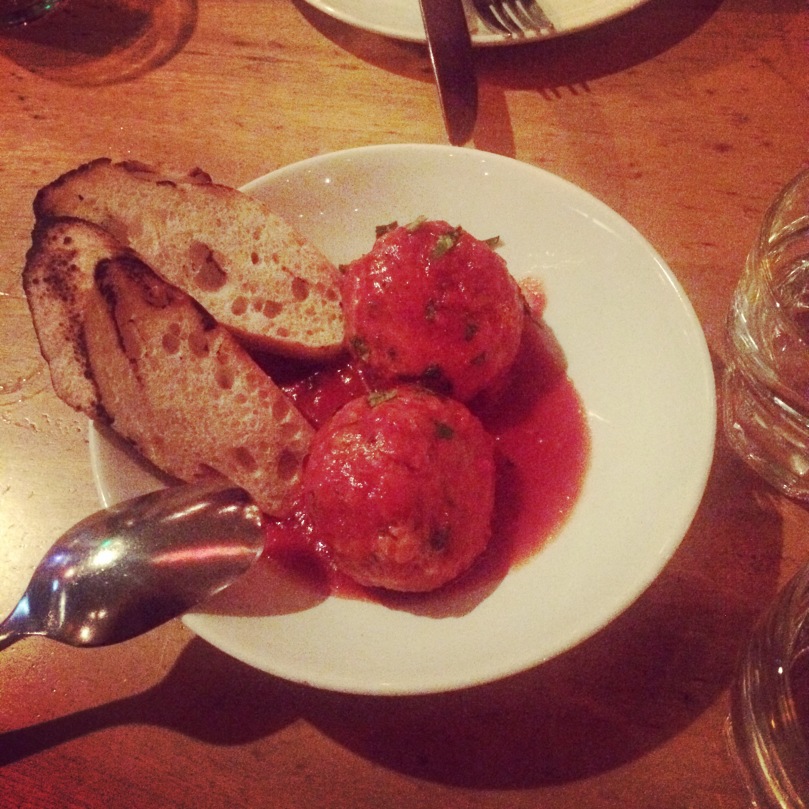 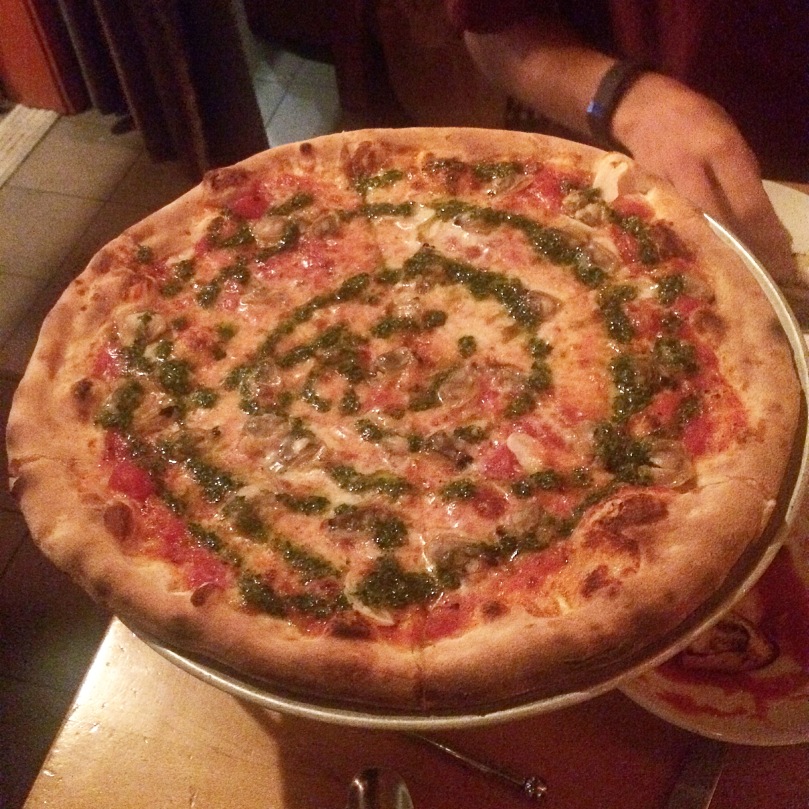 For dinner, we walked over to Chestnut Street, which is the cutest little strip of shops and restaurants and had dinner at Delarosa (totally took a picture of the sign the next morning so it wouldn’t be dark and ugly like the ones I took of our food).  It was teeny tiny in there but we only ended up waiting 10 minutes.  I finally found that watermelon beer I’ve been seeing around for years.  Go figure that it’s not even from California.  It tastes pretty good though!  We also shared meatballs and a clam pizza, which is my new favorite kind of pizza to order anytime I see it on a menu.

Cheers to one year of being married people!  Sunday was our actual anniversary and it turned out to be a perfect day.  Except for when we got lost and ended up in the Tenderloin and it was the only time I’ve actually felt unsafe on vacation…  Joey picked this amazing breakfast place, called Blackwood.  Again, on Chestnut.  Again, really small.  But we got a table right away and the food and Bloody Marys were delicious (and generously portioned!).

After breakfast, we strolled around and ended up at a little bakery where, SURPRISE, Joey had ordered a replica of the top tier of our wedding cake.  I don’t even know what I’ve done to deserve him.  Considering he blindly ordered a red velvet cake and I’m a harsh critic, this was a huge gamble, but you know what?  It tasted pretty darn close to my mom’s and the one we actually had at our wedding! 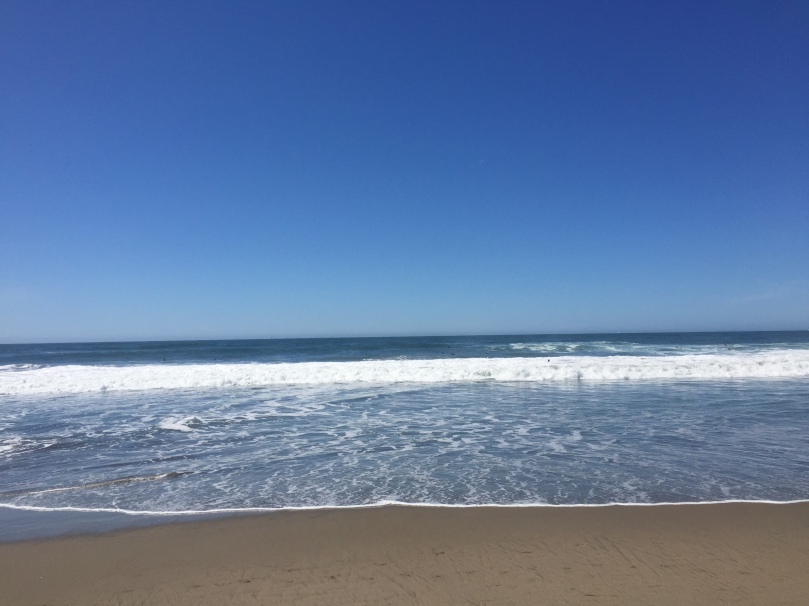 My dad had been talking up Ocean Beach, so we decided it would make for a pretty good anniversary activity.  How dumb is it that we packed our bathing suits but no sandals?  Just imagine two people walking across the beach, one in flats and one barefoot and hopping around because the sand was fire hot.  Don’t judge, we’re from a landlocked state and don’t know what we’re doing.  In other news, Ocean Beach was beautiful!  YOU WERE RIGHT, DAD! 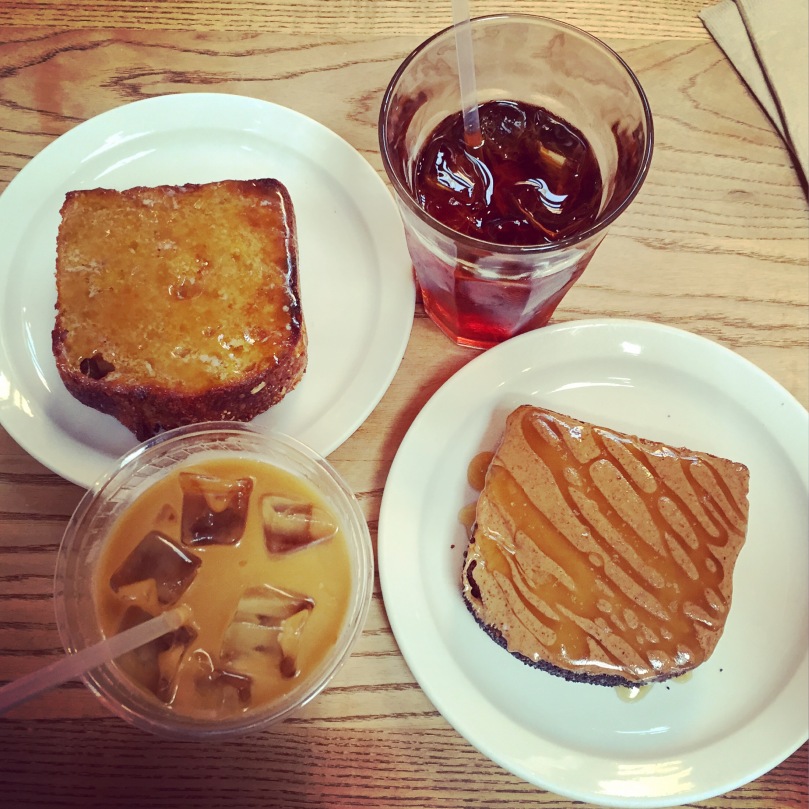 How much would you judge me if I said this toast was the best thing I ate on my entire trip?  Okay, maybe that’s a slight exaggeration but The Mill knows how to do artisan toast and coffee right.  That one in the back is CORNBREAD TOAST with butter and honey.  This is when I tell you that I’ve now perfected the technique of gently suggesting Joey order my second choice so that I can try it.  And gently suggesting that cornbread toast was one of the best life decisions I’ve ever made. 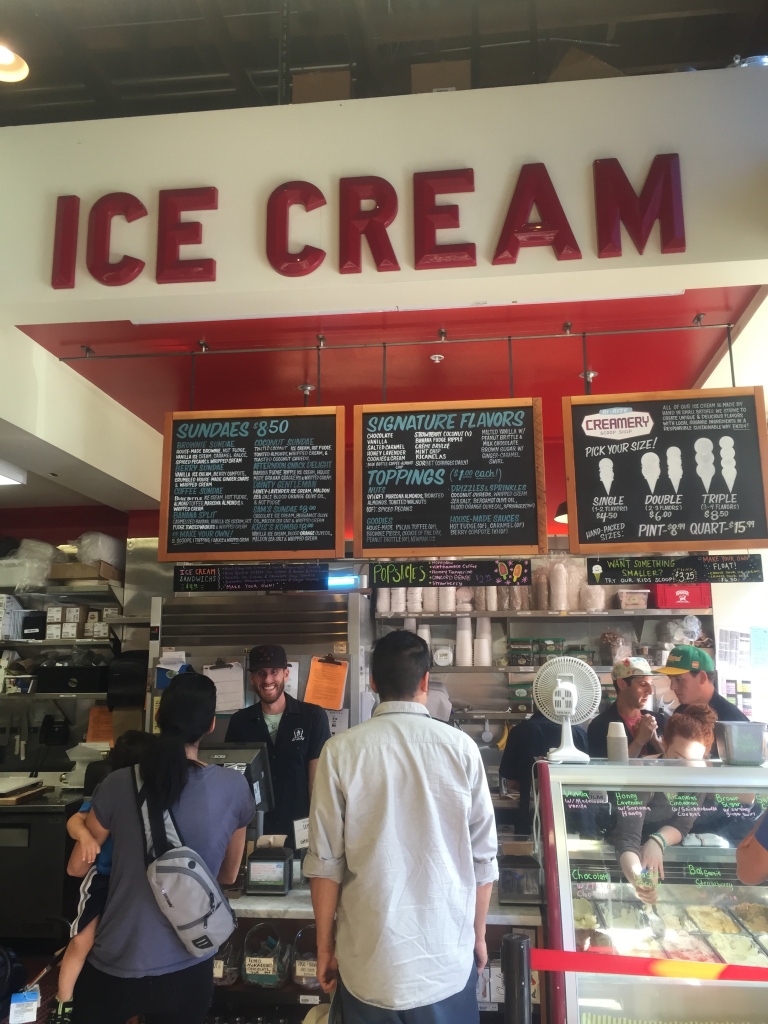 We noticed some people in line for coffee holding ice cream cones so we obviously had to go find where they were getting it.  Turns out Bi-Rite Creamery was just down the street.  Joey got in line for ice cream while I wandered around the Bi-Rite Market.  I’m still kicking myself for not buying one of these peanut/almond butters.  Also, they misunderstood Joey when he ordered his ice cream so he ended up with a second cup that I had to help him with.  Oh darn… 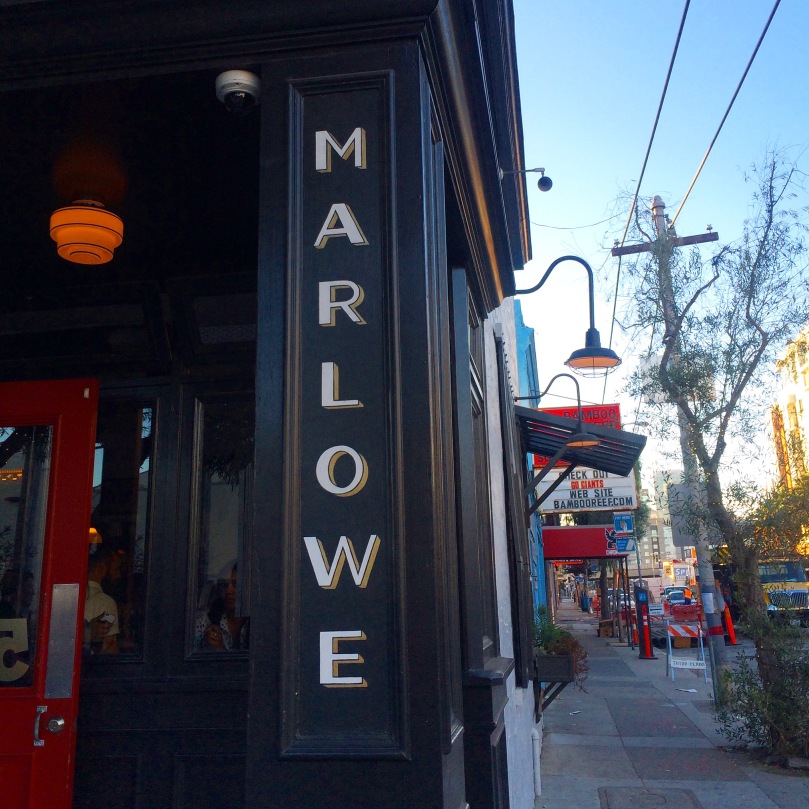 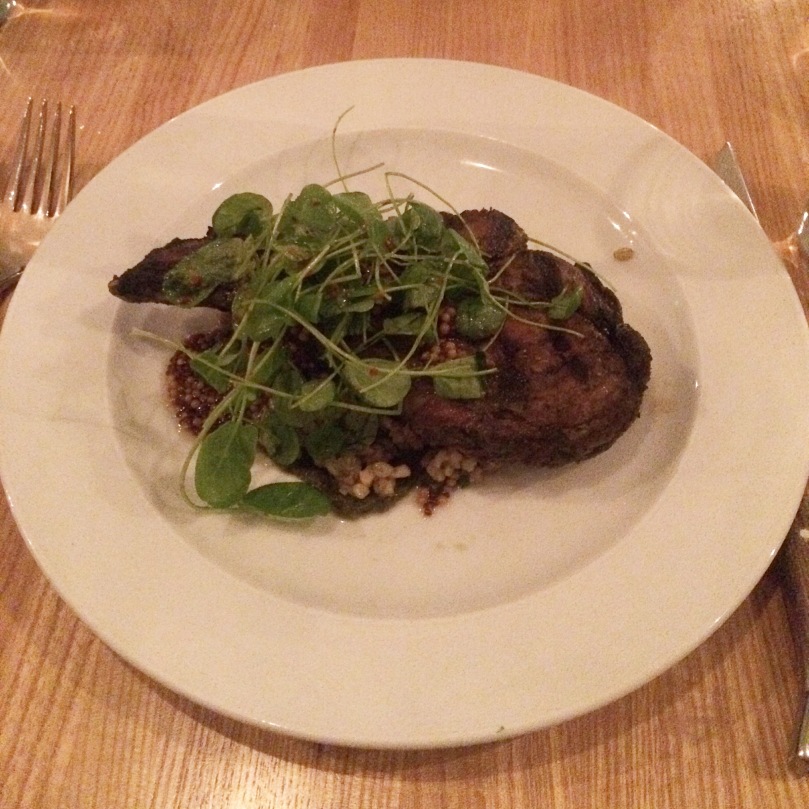 Post-field trip to the Tenderloin, we had dinner at Marlowe.  I guess I must’ve told them it was our anniversary because they gave us champagne when we got there.  So cute!  We got fried okra and a life-changing warm deviled egg to start.  That actually sounds kind of gross but it was SO GOOD.  Joey loved it and he doesn’t even like deviled eggs.  We shared pork chops for dinner and though I’m usually vehemently opposed to meal sharing, the table next to us had already gotten their food and the plates were seriously huge.

Where We Stayed: Contemporary STUDIO in the Marina in San Francisco

Where We Ate/Drank: Black Point Café and Bakery