A list of things consumed by my head, heart, eyes, ears and stomach lately.

I think this is a pretty well-known book, but somehow, I’d never read it.  Hannah’s mom, Tracey, loaned it to me and I LOVED it.  The story, the writing, the way it gave voice to a female character instead of the dozens of male characters.  It made the feminist in me say hell yeah.  It’s not often that I wholeheartedly love a book, but I felt that way about this one.

“The Unhealthy Truth Behind ‘Wellness’ and ‘Clean Eating’“

I don’t mean to offend anyone, but don’t even get me started on the gluten-free fad.  My eyes cannot roll any harder.  Much of this article was focused on Ella Mills of Deliciously Ella and I know nothing about her or her blog/cookbook, but still there were many parts in here that had me internally yelling “YES!”  Namely, Nigella Lawson’s disdain of the term “clean eating,” and this quote at the very end: “Eating a wide variety of foods, trying new things, and taking pleasure in food is good for you. Combine that with the structure of regular meals and snacks, and make an effort to include most food groups at your meals, and you are covered.”  Give it a read and let me know what you think!

Me and Earl and the Dying Girl

Joey and I found this on Netflix while we were in New Orleans and I cried big fat ugly tears at the end.  I couldn’t stop!  But even though it ripped my heart out, I ADORED this movie.  It was quirky, it was heartfelt, it was funny, it was excellently acted and perfectly scripted.  You always take your chances when you watch some lesser known indie film, but we found a real gem with this one.  Watch it, you won’t regret it.  Plus: Connie Britton.

“How to Ice a Layer Cake Without a Crumb in Sight”

This article from Bon Appétit was so timely because I made the crumbiest red velvet cake for Joey’s birthday and realized my icing skills needed some serious work.  I’ve never even heard of a “crumb coat” before, but that it genius!  Can’t wait to test it out next time I make a cake.  Also, originally, I used the picture from the article above but then I was like “wait, is it legal to post this?” 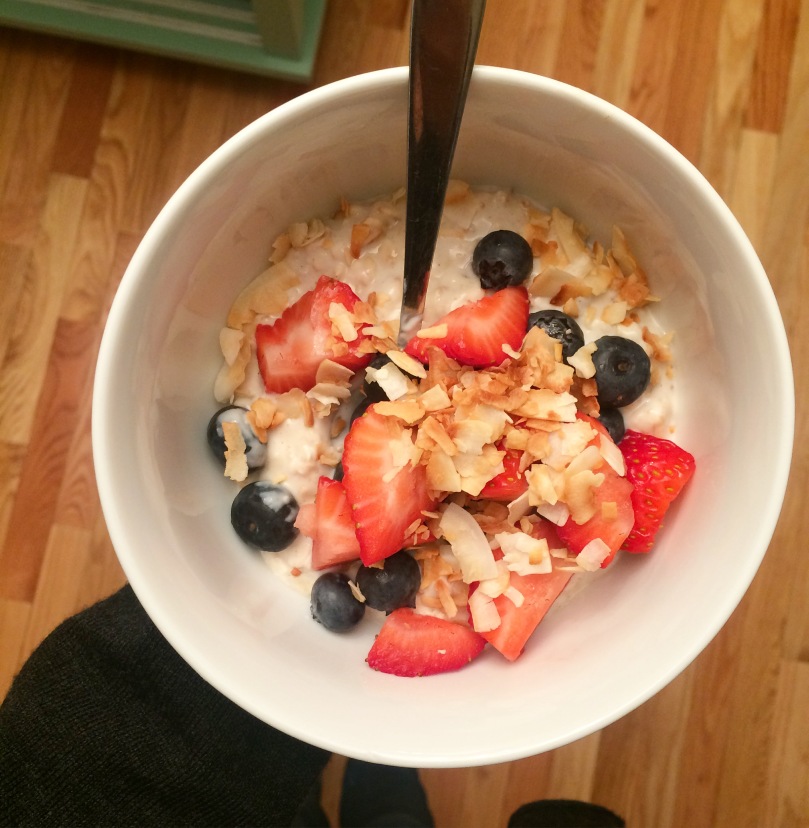 Ever tried kefir?  When I asked Joey, his response was “Kiefir Sutherland?”  Um no.  This recipe was part of a whole “Gut Health” section in the latest edition of Cooking Light and I was totally into it.  And I was also so into this breakfast, that despite it being so gray and rainy outside, felt bright and summery.  It was like the consistency of Greek yogurt overnight oats, but way less tangy.  More please!

Joey decided we should be more into bombers, so he picked this one up from the liquor store last weekend and we cracked it open last night.  Just no.  It was 13% ABV and it tasted like it too.  It was hoppy but had that sweet barrel aged flavor and I just couldn’t do it.  Better luck next time, I hope!

My Peanut Butter of the Month subscription has come to and end and I’m sad.  The silver lining is that it went out with a bang because that Vermont Peanut Butter brand chunky pb is life changing.  It is SO CHUNKY.  Like full peanuts in there!  A chunky peanut butter lover’s dream.  Looking back, that dark chocolate rosemary peanut butter was my absolute favorite, but this chunky one is a close second.

The Good Girl by Mary Kubica

Just started this one and because I know it’s being compared to Gone Girl, I’ll succumb and say I like this one better.  A) So far there isn’t anything unbelievably crazy happening and B) The characters seem much more relatable and real.  I sort of already have a feeling it’s headed in a certain direction, but I’m only 60% done, so we’ll see how it plays out.  Ten points if it doesn’t end predictably.